Murder Most Conventional: Interviews About The New Malice Domestic Anthology

As this post is published, Malice Domestic is already underway in Bethesda, Maryland—three days (plus!) of the best in traditional mystery. There are many highlights of the weekend ahead, including celebrations of this year’s honorees: Katherine Hall Page earning a lifetime achievement award; Victoria Thompson as guest of honor and Linda Smith Rutledge as fan guest of honor; Hank Phillippi Ryan as toastmaster; an Amelia Award for Douglas Greene; a Poirot Award for Barbara Peters and Robert Rosenwald; and a remembrance of the late, great Sarah Caudwell. Several of our SleuthSayers here are in the running for Agatha Awards, including both Barb Goffman and B.K. (Bonnie) Stevens in the short story category—for “A Year Without Santa Claus?” and “A Joy Forever,” respectively—and Bonnie again for her YA novel Fighting Chance, and I’m honored that my own book, On the Road with Del & Louise: A Novel in Stories, is a contender for Best First Novel honors. (Good luck to us all—and a second dose of best wishes to Bonnie, who recently broke her arm and won't be making the festivities herself!)

Another highlight of this year’s Malice is the return of the Malice anthology—this one with a focus on conventions themselves. Malice Domestic: Murder Most Conventional is presented by Katherine Hall Page and features 22 original stories and one reprint, including stories by Marcia Talley, Neil Plakcy, Victoria Thompson, John Gregory Betancourt, Su Kopil, Kate Flora, Charles Todd, Gigi Pandian, Hank Phillippi Ryan, Frances McNamara, KB Inglee, Kathryn Leigh Scott, KM Rockwood, L.C. Tyler, Nancy Brewka-Clark, M Evonne Dobson, Ruth Moose, Rhys Bowen, and Shawn Reilly Simmons. Our own SleuthSayers are among this batch of honorees too, with B.K. Stevens’ contributing “What Goes Around” and Barb Goffman doing double-duty both as a contributor with “The Best-Laid Plans” (the stories were chosen by blind submission) and as one of the editors, along with Verena Rose and Rita Owen—with Barb focusing on developmental and line editing.

Last year I edited the Bouchercon anthology Murder Under the Oaks, and one of the great joys of that process was working with first-time writers, so to celebrate the new anthology, I’m interviewing Marie Hannan-Mandel, author of “The Perfect Pitch,” and Eleanor Cawood Jones, author of “Killing Kippers”—two authors making their debuts as traditionally published authors—and also talking to Barb about her experiences editing the project and working with these two writers in particular.

Before the interview then, a couple of quick introductions:

And now on to the interviews—with Marie and Eleanor up first!

Tell us a little bit about your stories “The Perfect Pitch” and “Killing Kippers,” and given the anthology’s theme, how did your own experience with conventions—maybe Malice in particular!—inform your characters or your plot?

MARIE HANNAN-MANDEL: My story is set at an inventors' convention in Maine where the first person narrator from New York City has come to persuade the hot-shot inventor leading her workshop to support her product. When a crime occurs she hopes that if she solves it the inventor will be so grateful he will back her.  I have attended many conferences and there are always representatives of various "types" in attendance--the pushy ones, the painfully shy ones, the beautiful ones whom everyone defers to, the famous, and the stalkers who are hyper-focused on getting to know the presenters. I tried to represent this mixed bag of people in a crime setting.

ELEANOR CAWOOD JONES: Although not a single character in "Killing Kippers" is real, I did actually get snowed in at a casino-hotel many, many years ago where there was a clown convention going on. I was frankly astonished that clown conventions existed and the whole experience was distinctly surreal. So though the memory of that time is fuzzy, when it came time to come up with a crime-most-foul in a convention setting, that herd of clowns bulldozed their way to the forefront when I sat down to start writing. This is not your father's Stephen King clown story, although there is a clown front and center. I'm only sorry I didn't attend any clown panels while I was there. I think I could have been a great balloon-animal artist.

"Kippers" is written in first-person drunk from the perspective of a narrator who is not normally much of a drinker, which made room for some off-the-wall observations and interactions along the way. If pressed, I'd call it dark humor. And it's not just about murder, it's about life and joy and sadness and unusual friendships found in unexpected places.

Malice Domestic celebrates the traditional mystery and the book cover copy explicitly calls these cozy mysteries. How do you define those terms traditional and cozy for yourself, and how did that determine your approach here? Do you usually write in the traditional/cozy vein?

MARIE HANNAN-MANDEL: To me, cozy or traditional mysteries are those that focus on the gentler side of crime fiction. I'm not interested in gruesome description or detailed forensics. My focus is on the characters and why they do the things they do. I enjoy humor and try to use it where I can.  I almost always write what I consider cozy stories.

ELEANOR CAWOOD JONES: When I think of traditional and cozy I picture Miss Marple and some steaming tea and a paneled drawing room. I like to sit down in the comfort of my own home and go there to figure out with Miss M (or Poirot or any number of others) to enjoy the atmosphere of a whodunit. This applies to any number of settings, of course. Strange, but all the traditional mysteries I have read and no two are alike. They are comfortably familiar yet unique. But there's a certain feeling and mindset that goes along with reading one, and that's what traditional and cozy mean to me. Also, they are less violent and bloody than say, a traditional thriller, and thus considered less disturbing. For that reason, I wanted a milder, more bloodless plot and crime for Kippers, and though not a locked room setting, at least a self-contained area.

With that said, I do write some traditional mysteries, but I like to break rules. Some of my characters might just get away with it and I like to tamper with the definition of a bad guy—not everything is black and white and sometimes I find myself rooting for the villain. I also am extremely interested in motivation and personality of characters, and although plot is king I like to write about interesting people—even if they are only interesting in their own minds. Everybody has a story and everybody has a button just waiting to be pushed. I like to push the buttons of my characters and see what happens. So I stray into the thriller side but cozy is my home.

Finally, how did you celebrate the news when you heard that your stories had been accepted?

MARIE HANNAN-MANDEL: I took a walk on the beach in Ireland and skipped through the sand.

ELEANOR CAWOOD JONES: Best feeling in the world. I sprang up from my couch and walked around the house in circles, making celebratory shouting noises and trying to hold still long enough to text a few people who have been over-the-top amazing in their encouragement and support. Then I ate off that news for a week! All my favorite restaurants. Writing is fattening.

And now to switch perspectives on all this—a quick chat with Barb Goffman from the other side of the desk. 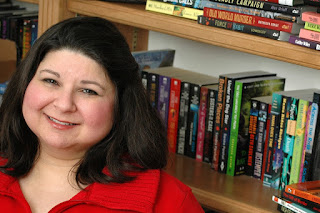 Barb, you’ve served as an editor here and also for several volumes of the Chesapeake Crimes series. Have you seen any differences in working with first-time authors or authors early in their career versus those who are veteran authors?

BARB GOFFMAN: While I'm happy to work with all authors, I love working with new and newer authors. Newer authors' stories often need more work than stories written by more experienced writers, but newer authors often are quite enthusiastic about doing revisions (sometimes several drafts) and taking advice that allows their stories to shine. I love helping them transform their stories from good to great.

More veteran authors can sometimes be less open to editing. Because they're more confident in their skills, if they like what they wrote and think it works, they might be willing to let issues slide. And that is their prerogative. But the best authors, no matter how experienced, are open to at least considering if there's a problem to fix. I've found that if I give a detailed explanation about why I have a concern about something, most authors—be they new or established—will try to address the situation.

Thinking about the anthology on the whole, what was it about Eleanor’s and Marie’s stories in particular that stood out as distinctive or memorable, or what can readers expect from the contributors by these two new voices on the mystery scene?

BARB GOFFMAN: Marie has a great, funny voice and has crafted an interesting puzzle with strong clues. In her early drafts, she had some inconsistencies and logic problems that distracted me when I read the story. When I pointed them out, she enthusiastically dug in and fixed them. The result is a much stronger story. With the logic issues resolved, Marie's voice really gets the chance to stand out. I hope everyone will take the time to read this story. It's a winner.

Eleanor's story is also very funny. (I write funny stories so perhaps that's why this element stood out to me in both stories, but I think it's something everyone will enjoy.) It takes skill to make a story involving death funny, and Eleanor does it. I also loved that she set her story at a clown convention. That's imagination at work. And, like Marie, Eleanor has a strong voice. Her first draft had a bit too much detail, but once that came out, her dialogue and internal monologue was able to really shine, making her story one readers will remember with a smile.

Malice Domestic: Murder Most Conventional is available at Amazon in both paperback and Kindle and is also for sale at Malice Domestic this weekend. A special signing by the contributors in attendance will take place at the opening reception, Friday, April 29, 9:15-10 p.m.