by Janice Law
I have no problem with being “a woman of a certain age.” Well, to be frank, old. So long as you don't refer to me as a “senior” or some other namby-pamby euphemism, I’m OK with old. Youth may be wasted on the young, but they're the only ones with the energy to endure it. No, aside from “the ills that flesh is heir to” as Hamlet puts it, I’m pretty content, except for my quarrel with the almost uniformly young and glamorous heroines of popular novels and TV series.
Oh, it’s fine for a George Gently to show white hair and a bit of a paunch. Kurt Wallander was done in by dementia not low ratings, and Inspector Lewis, with a bit of makeup and hair dye, looks to go on until he's older than his one time mentor Inspector Morse.

Not so the women of mystery, who need youth or glamor and preferably both. Except for Hetty Wainthropp, I don’t think anyone has picked up Miss Marple’s cardigan. So it has been a pleasure to discover Vera Stanhope, the crusty, plain spoken DCI from Newcastle, who is the featured detective in Vera. The series from ITV is now several seasons old but is just now showing up on my set.

This DCI is middle aged and dumpy. Her wardrobe can best be described as functional. She has a peculiar and distinctive voice and calls everyone, even prime suspects, either Love or Pet. If she’s got emotional trauma in her past, secret addictions, or unlikely obsessions, she keeps them private. Brenda Bethyn plays her as a grown up lady and all the better for that. 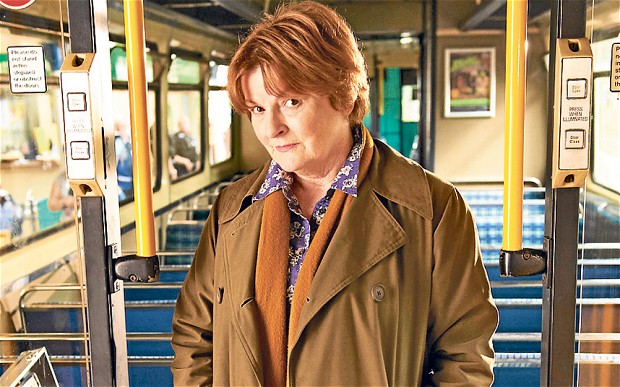 Based on the novels of Ann Cleeves, who is also responsible for that taciturn depressive, Jimmy Perez of Shetland, Vera uses a nice blend of up to date tech – the cry for CCTV footage goes out several times in every episode – with a good sense of human nature to solve her cases.

Accompanied by her young and handsome DS Joe Ashworth (David Leon), Vera is often abrasive but never heartless, being particularly sympathetic to younger offenders. She’s no softie, but she’s a good listener who, unlike her able young sergeant, can draw on a vast experience of human oddities and frailties. She’s been around long enough so that nothing too much surprises DCI Stanhope. Nice to see age is worth something!

The TV show encouraged me to sample Cleeves’ Silent Voices, part of a Vera Stanhope series. I was not disappointed. Like the Shetland novels, Silent Voices is well written with an intricate plot, an abundance of red herrings and misdirection, and a fine sense of landscape and atmosphere – like me, the author is clearly a countrywoman.

But Vera is a much more interesting, rough-edged, and generally sparky character than the hero of the Shetland series, and these traits are emphasized in the novel more than on the screen. Vera occasionally succumbs to envy and she has a nice line in snarky thoughts. She gets cranky with her staff and over works Joe, her conscientious sergeant, who is her closest companion as well as assistant.

At the same time, the DCI never falls into self pity, although she is a lonely person. She is quick to apologize and also to praise. This is a well rounded character, with a good deal of sympathy for the people who get entangled in crime and violence, as well as a tremendous excitement about her job. Like Sherlock Holmes, she can’t wait for the game to be afoot.

There are differences between screen and print versions of the character. Clearly a novel is much better at presenting the inner thoughts of the characters and the intellectual process of detection. But it is also interesting that, as with Elizabeth George’s Barbara Havers, Vera has been tidied up a bit for TV. She is chunky but not really fat, and Brenda Bethyn is only a decent haircut and a nicer wardrobe away from being totally presentable.

Not so Vera of the novel, who is depicted not only as homely but as terminally undesirable, a convention I find unfortunate. If only the svelte and pretty were attractive, there would be no population problem anywhere, and it strikes me that Vera’s blank romantic life is simply the female variant of the suffering detectives are supposed to endure.

But maybe not forever. In the last TV episode, a would-be admirer appeared. Vera turned him down – but left the door open. Now a plain faced, overweight female detective of a certain age with a bona fide admirer would really break a number of stereotypes.

I hope the script writers will go for it!
Posted by Janice Law at 00:00