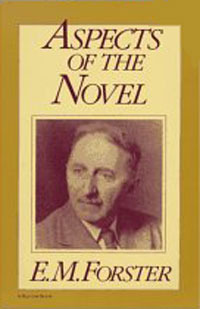 I love Downton Abbey. I've watched every episode, and I'll keep watching till the end. I own the DVD sets for two seasons. I also own The Unofficial Downton Abbey Cookbook, and I use it often. I've made one dish so many times, in fact, that I decided to include a version of it in my next story, which will appear in the April Alfred Hitchcock's Mystery Magazine. (The Unofficial Downton Abbey Cookbook calls the dish Noisette Potatoes. My story calls it Spudballs.)

So I think I qualify as a loyal fan. When I criticize the show, I do so in a spirit of love, as a regretful witness to the elegant decline of something that was once more than elegant. I don't think Downton Abbey is very good this season, and I don't think it was very good last season, either. Judging from comments I see on Facebook, a lot of other loyal fans feel the same way. As I was watching the show last Sunday, some comments E.M. Forster makes in Aspects of the Novel came to mind. They helped me focus more sharply on some crucial elements Downton Abbey now lacks--elements that are crucial to mysteries, too.

Forster's distinction between story and plot is justly famous. A story, Forster says, is "a narrative of events in their time sequence. A plot is also a narrative of events, the emphasis falling on causality. `The king died and then the queen died" is a story. `The king died, and then the queen died of grief' is a plot. The time-sequence is preserved, but the sense of causality overshadows it." A story appeals to our curiosity, Forster says. Like cave-dwellers sitting around the fire or the sultan listening to Scheherazade's tales, we want to know what happens next. But curiosity, according to Forster, "is one of the lowest of the human faculties." And ultimately, a story that appeals only to our curiosity doesn't satisfy us.

I think that's the problem with Downton Abbey. During the last two seasons, it's become a story. It no longer has a plot. Things keep happening--there are plenty of incidents, some of them dramatic. A child goes missing. A beloved character has a frightening medical crisis at the dinner table. Romantic attractions flare up, little conflicts erupt, secrets nudge toward the surface. Meanwhile, there are many amusing verbal sparring matches and many tender exchanges, and of course there are always beautiful things to look at--rooms, dresses, pastoral landscapes. And since Downton Abbey has wonderfully rich characters we've come to know well and care about deeply, we want to know what will happen to them next, how things will turn out. So we keep watching.

But it's not enough to keep us satisfied, because there's no real plot. We seldom get a sense that one incident has caused another, or that it's likely to have significant consequences. Daisy says imprudent things, Tom comes back from America, Baxter won't have to testify after all--the incidents may be more or less interesting, but they often don't even seem related to each other. And they don't give us much of a basis for trying to figure out what's likely to happen next.
A plot does give us such a basis. A plot, Forster says, appeals not only to curiosity but also to "intelligence and memory"--and it does this by introducing the element of "mystery." He offers a further extension of his basic example: "The queen died, no one knew why, until it was discovered that it was through grief at the death of the king." This is "a plot with a mystery in it, a form capable of high development." It engages our minds far more fully than a mere story could, because now we're using our memories to keep track of what's happening--we know that's important, because we have to remember incidents in order to understand how one might cause another. We're also using our intelligence to grasp each incident's significance and try to figure out what might happen next. "To appreciate a mystery," Forster maintains, "part of the mind must be left behind, brooding, while the other part goes marching on."

I find that last sentence an important key to understanding what's wrong with the current season of Downton Abbey, and an illuminating description of what a satisfying mystery does.If a mystery has a suspenseful, fast-paced plot, our curiosity keeps us turning pages. At the same time, memory and intelligence linger behind, "brooding" about evidence and making predictions. No wonder we love good mysteries so much. They force us to read actively, and we enjoy the workout. Really good mysteries also reward us for our hard work by giving us endings that bring everything together seamlessly. We can see how all the incidents related to each other, how each built on what had happened before, how one incident caused another until the mystery reached a conclusion that feels inevitable. Even if we fail to predict what that conclusion is, we feel satisfied--we blame our own memory and intelligence for our failure, not the author.

So one way of describing the problems with the final seasons of Downton Abbey might be to say they needed more mystery. Not mystery in any narrow, generic sense--heaven knows, nobody wanted to see Bates or Anna accused of murder again. But these last seasons might have been far more satisfying if they had included fewer entertaining little incidents and instead developed two or three plotlines more fully. I wish those plot lines had engaged our memories and intelligence. I wish they'd challenged us to think about what caused an incident and what its effects might be, to debate ethical dilemmas the characters faced, to analyze relationships and feel we have a rational basis for thinking they will or won't succeed.

But none of that happened--at least, not in my opinion. So I'll watch the final episodes, but I don't expect them to give me the sort of satisfaction the ending of a really good mystery does. I imagine the final episodes will give us at least one incident featuring each of our favorite characters. I imagine some characters' stories will end happily, and some will end less happily. And I'd guess decisions about which characters get happy endings and which don't will be based primarily on the producers' guesses about what viewers want, not by any internal necessities created during these last two seasons. ("Will viewers think it's a bit much if both Mary and Edith find true love at last? If neither does, it might seem too bleak. Shall we have things work out for only one of them? Which one? Who has a sixpence we can toss?") We'll get some final witty exchanges between Violet and Isobel, some stunning final interior and exterior shots, and then Downton Abbey will join the assembly of once-great shows that kept going a season or two too long.

Oh, well. I'll still have those two earlier seasons on DVD. And at least getting frustrated with Downton reminded me of what a fascinating little book Aspects of the Novel is. The passages I quoted are from the fifth chapter, "The Plot." Forster has other interesting things to say about mysteries, too. If you're not already familiar with the book, you might want to check it out.

I can't resist the temptation to end with a personal note. When the Agatha nominations were announced not long ago, I was thrilled to see that both a story and a book of mine had made the list. "A Joy Forever" was nominated for Best Short Story, and Fighting Chance was nominated for Best Children's/Young Adult. Since it's unlikely that anything like this will ever happen again for the rest of my life, I decided to go ahead and brag about it. If you'd like to read "A Joy Forever," you can find it at the Malice Domestic website– http://www.malicedomestic.org/PDF/Stevens_Joy.pdf. You can read the first chapter of Fighting Chance on my web site here. I'm stunned, delighted, and very grateful.
Posted by Unknown at 00:00