Another month, another death of a musical icon who made a name for himself in the musical proving ground of the 1970s.

I did not start out as a fan of Earth, Wind & Fire. In fact, it was years after their late '70s peak before I
gave them much thought at all. That goes double for the guy dancing center stage, singing and either joyfully whacking on a tympani or joyfully playing on a kalimba, Maurice White.

At the time I was barely into my teens, and like many (but hardly all) of my peers, I had an intense loathing for that hottest of music fads of the era: disco. So when Earth, Wind & Fire released "Boogie Wonderland," with that steady beat and those simplistic lyrics, I lumped them in with the likes of K.C. & the Sunshine Band, Alicia Bridges, Amii Stewart, Andy Gibb (Lot of "A" listers there, I know!), Yvonne Eliman, the S.O.S. Band, and so on.

Because you could call these guys a soul band, or a funk band, a pop band or even a rock band,  but disco? Nope. Bassist Verdine White (Maurice's younger brother) famously said of "Boogie Wonderland": "I guess you could say we were at the party but didn't get on the dance floor."

And it all started with the inimitable Maurice White.

From a recent article in UK paper The Independent:

"Maurice White, a sometime jazz session drummer for the Ramsey Lewis Trio, founded the band that would become Earth, Wind & Fire in Chicago in pre-disco 1969. His outfit has undergone several sonic shifts over the years. 'When we go to Europe everyone says we’re a funk group,' says Bailey. 'But if you got to know us through "Zanzibar" [from the 1973 LP Head to the Sky], you’d say we were a fusion band. If you came in on [the 1979 single] "After the Love is Gone", you’d say we were a love song group. We’re a cross between all of those things. Maurice always called it ‘Spectrum Music’.”

And giving their catalog a listen bears this notion out. Songs like "September", "After the Love Is Gone", "Fantasy", "Shining Star", "That's The Way Of The World", "Sing A Song", and "Let's Groove", just to name a few, are all over the place, tied together by a soulful approach and the infectious joy that is EWF's calling card.

In interview after interview, band members like vocalists Phillip Bailey, Ralph Johnson and younger
brother Verdine are unanimous in laying the credit for this core of joy in their music at the feet of EWF founder and long-time front man Maurice White.

Of all things it was not one of their terrific original songs, but their cover of a Beatles song that really got me to pay attention and really listen to EWF. I'm speaking, of course, about "Got To Get You Into My Life". I mean, jeeze, just listen to those horn lines! And everything is so tight.

And can there be a better example of "Spectrum Music" than this "Afro-Soul" reinterpretation of one of a British pop-rock band's lesser hits?

Maurice White had health problems for decades, suffering first from Multiple Sclerosis and then from Parkinson's Disease, the combination of which led to him giving up first touring and eventually even recording with the band that he founded and helped make into a decades-spanning legend. 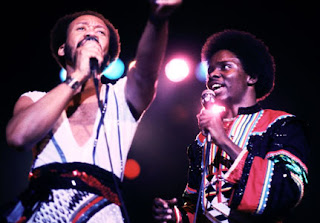 All that said, he seems never to have lost that megawatt smile and the joie de vivre that seems to have been his defining characteristic.

Truly a masterpiece.
Posted by DoolinDalton at 01:00