by Paul D. Marks
One of my favorite film noirs is Born to Kill, with Lawrence Tierney, Claire Trevor, Walter Slezak and Elisha Cook, Jr. If you’re in too good of a mood and you want to get knocked down a little, spend a couple hours with these people. Some of the nastiest in the original noir cycle. After you do you’ll need a shower. 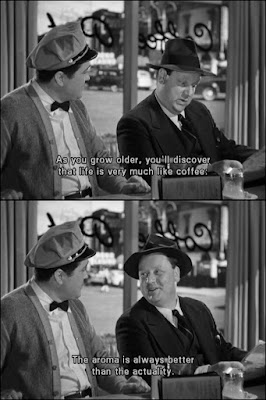 That said, the movie has one of my favorite lines of any movie, spoken by Walter Slezak’s sleazy detective character:

Delivery Boy: My that coffee smells good. Ain't it funny how coffee never tastes as good as it smells.

Albert Arnett (Slezak): As you grow older, you'll discover that life is very much like coffee: the aroma is always better than the actuality. May that be your thought for the day.

I think about that line a lot because it’s so true. Not just about coffee but about all kinds of things in life, the expectation of something often being better than the reality. But this post isn’t really about the line and its philosophical undertones. So maybe I’ll leave that for another time.

But the line got me thinking about a lot of great lines. So that’s what this post is about and Part One will be great lines from three of my favorite noir movies (though not my top 3 except for Double Indemnity). Later parts will deal with other types of movies, westerns, dramas, etc. And then onto the books... But since I’m a noir addict I’ll start with my favorite film addiction.

For my money the ultimate film noir. If I had to show one noir to a Martian to say “this is film noir” it would be this one. Fred MacMurray plays Walter Neff, the hapless insurance salesman to Barbara Stanwyck’s blonde-wigged femme fatale. She hooks him with her anklet and it’s off to the races after that: 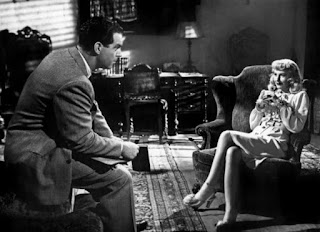 Walter Neff: That's a honey of an anklet you're wearing, Mrs. Dietrichson.

Walter Neff: Suddenly it came over me that everything would go wrong. It sounds crazy, Keyes, but it's true, so help me. I couldn't hear my own footsteps. It was the walk of a dead man.

Walter Neff: How could I have known that murder could sometimes smell like honeysuckle?

Phyllis: We're both rotten.
Walter Neff: Only you're a little more rotten.

Walter Neff: It's just like the first time I came here, isn't it? We were talking about automobile insurance, only you were thinking about murder. And I was thinking about that anklet.

Walter Neff: Know why you couldn't figure this one, Keyes? I'll tell ya. 'Cause the guy you were looking for was too close. Right across the desk from ya.
Barton Keyes (Edward G. Robinson): Closer than that, Walter.
Walter Neff: I love you, too. 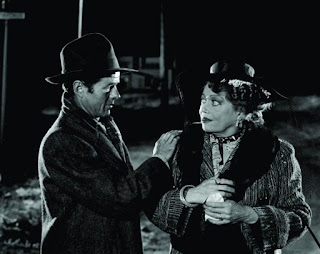 Claire Trevor and Lawrence Tierney play two of the lowest, meanest, nastiest people you never want to run across. Different from some noirs, much of the movie takes place in upper class San Francisco instead of on the meaner, lower class streets. We see the sleaze and depravity beneath the veneer of civility and respectability. Tierney is a thug, and apparently that’s not too far from the reality of his life. He was busted for drunk and disorderly and assault and battery. And apparently even in his 70s he was getting into trouble. When he played Elaine’s father (Julia Louis-Dreyfus) on Seinfeld they were so scared of him they never asked him back to repeat the role. And on Reservoir Dogs he almost came to blows with Quentin Tarantino because he would show up drunk and not take directions.

In Born to Kill, we have the coffee line mentioned above and several other good ones as well:

Sam Wild (Lawrence Tierney): Oh, I see. You cross the tracks on May Day with a basket of goodies 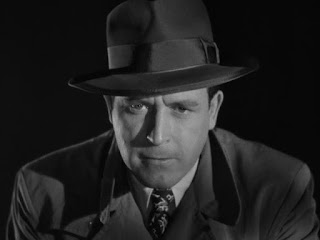 Mrs. Kraft (to Claire Trevor): You're the coldest iceberg of a woman I ever saw, and the rottenest inside. I've seen plenty, too. I wouldn't trade places with you if they sliced me into little pieces.

Mrs. Kraft: How come you got a hold of this information?
Marty Waterman (Cook): Through underworld connections, like it says in the newspapers. I'm a bad boy.

Marty Waterman: You can't just go around killing people when the notion strikes you. It's just not feasible.

Mrs. Kraft: Are you trying to scare me?
Helen Brent: I'm just warning you. Perhaps you don't realize - it's painful being killed. A piece of metal sliding into your body, finding its way into your heart. Or a bullet tearing through your skin, crashing into a bone. It takes a while to die, too. Sometimes a long while. 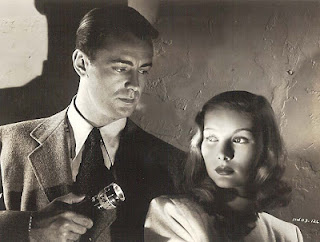 Alan Ladd and Veronica Lake’s third full outing together and probably my favorite. Along for the ride in this Raymond Chandler original screenplay are Hugh Beaumont (later Leave it Beaver’s dad) and the great character actor William Bendix (who also had TV success in The Life of Riley). Ladd and his buddies Bendix and Beaumont are just back from the war—and you know when you say just ‘the war’ it has to be World War II. It seems that Ladd’s wife has been fooling around on him and when she ends up dead the police suspect the estranged husband—or maybe it’s the crazy vet with the plate in his head (Bendix). We’ll see.

Eddie Harwood: Half the cops in L.A. are looking for you.
Johnny Morrison (Ladd): Only half?

Joyce Harwood (Lake): [Joyce offers Johnny a lift in the rain] Get in.
[Johnny hesitates]
Joyce Harwood: Well, you could get wetter if you lie down in the gutter.

Eddie Harwood: Drink?
'Dad' Newell: Don't mind if I do but easy on the water.

Johnny Morrison: [discovering his wife in close proximity to Harwood] You've got the wrong lipstick on, Mister.

Helen Morrison (Ladd’s wife): I take all the drinks I like, any time, any place. I go where I want to with anybody I want. I just happen to be that kind of a girl.

Johnny Morrison: [to the partygoers] Seems I've lost my manners or would anyone here know the difference?

Please check out Pam Stack of Authors on the Air Interviewing me a couple of weeks ago: http://www.blogtalkradio.com/authorsontheair/2016/02/04/paul-d-marks-talks-about-writing-and-more-on-authors-on-the-air-live

And look for my post on Drinks with Reads at Mystery Playground, going live on Wednesday, Feb. 26th, but one of the pix is already up on the front page: http://www.mysteryplayground.net/p/summer-drinks-with-reads-series.html

Well, that’s all folks. At least for now. 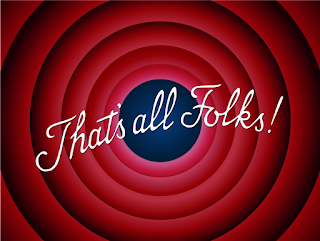