I just finished a novel, always a satisfying moment, even if the product never quite lives up to the initial inspiration. Novels begin in careless rapture with hints of genius, run into complications toward the middle, and end, if one is lucky, somewhere in the realistic realm of ‘good enough.’

But this one, being set in the 1920‘s, got me to thinking about how one gets information for historical novels and the differences in what is needed for history, on the one hand, and a story, on the other. In my opinion, it comes down to minutia, and while I don’t like to criticize historians, whose ranks I’ve joined on occasion, they usually skimp of the day-to-day details that are the blood and bones of any novel.

Money, in particular, is always tricky. Not only did earlier eras have different coinage – the UK went decimal within living memory – but it is extremely hard to determine equivalents in today’s money. You don’t need to be a Jane Austen or a Karl Marx to feel that lacking a grasp of how much and what value leaves a gap in a manuscript.

Of course, historians venture into the realm of economics, but they tend to like the big scale and the overall trend. Only occasionally do they include the price of a modest lunch or the cost of a subway ticket or a ride on a mail coach. What would a woman pay for a dress and how much would her seamstress clear? These are often hard to determine.

Consider Weimar, the ill fated Republic and its rowdy capital, Berlin, where I’ve recently been spending time in the service of the very young Francis Bacon. It’s easy to find statistics on everything from housing to political preferences, but I really had to struggle to find out what was served in the local bars, where I’m afraid Francis spent a lot of time. Fortunately a memoir came to the rescue with the menu: pea soup, sausages and beer. Memoirists are notoriously unreliable about their personal history, but I think they’re probably trustworthy on fast food.

Memoirs, particularly Christopher Isherwood’s, were useful in another way, because Berlin suffered extensive bombing damage during the war. It was then divided by the wall, and ,when the wall came down, reintegrated with the east. All this has meant buildings lost, areas redeveloped, old haunts vanished except in the mind of the memoirist who helpfully resurrects forgotten districts and seedy cafes. Sometimes, though, one must finesse a problem. I read whole books on the so called combat leagues, the groups of political activists that slid from providing bodyguards to fueling street warfare. Their motives, their sociological backgrounds, their financial support, their aims, their resentments were all laid out in neat columns. But what about the colors of their shirts? Except for the Brownshirts, no dice. 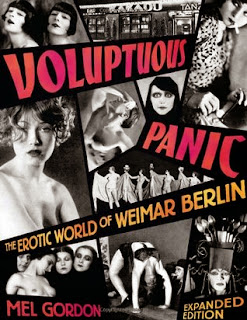 Of course, occasionally one comes across a volume that seems written with other writers in mind. I can recommend two. Mel Gordon’s Voluptuous Panic, the Erotic Worlds of Weimar Berlin is beyond lurid but the vocabulary and the venues, not to mention the goings-on of the notorious sex trade, are all usefully laid out. With pictures. Want to know who patronized the Cozy Corner, the “boy bar” beloved of Auden and Isherwood? Care to take a gander at the Eldorado, the great transvestite club and cabaret? Gordon has the info and the illustrations. A picture really is worth a thousand words in this case.

Not related to Weimar but useful for anyone who cares to dip into the Victorian world is Daniel Pool’s What Jane Austen Ate and Charles Dickens Knew. Divided up by topic ranging from transportation to marriage to money to etiquette, it can help you distinguish a barouche from a victoria, and a ladies maid from a housemaid. A useful volume indeed. 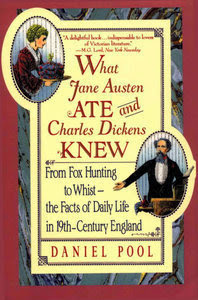 But sometimes there are no useful memoirs or frivolous historians. Then the writer must improvise.

Soon after we moved to eastern Connecticut, I was asked to write a local history, and wanting to do something a little different, I came up with the idea of ending each chapter with short blurbs like what’s for dinner? what did they do for fun? travel time to some local town or attraction? how were they educated? and how did they die?

You can probably guess which ones were easy to discover, New England being proud of its education and mortality being popular with medical historians. Travel was another matter. I wound up checking with a local cross country coach to estimate how long it would take a tribal runner to cover rough ground and with the university equestrian center for the time it would take a decent horse to make a ten mile journey on dirt roads.

Historians need the big picture, bless them, but novelists have – or should have – their own big, or little, picture in mind. What we need are the details, the minutia and the ephemera that allow us to conjure the ghosts of the past.
Posted by Janice Law at 00:00

Amen. I cannot recommend highly enough the works of Judith Flanders on daily life in Victorian England, and Liza Picard on London through the ages. For America, the "Everyday Life" series is excellent and does cover things like travel (how, how long, how uncomfortable), dining, habits, accents, bathing, etc. And diaries, letters, etc.

And I am definitely going to check out "Voluptuous Panic"!

Janice, this is special to me for many reasons. We kids were the 6th generation raised on our family farm under a land grant signed by Andrew Jackson, and family history was a big deal. With the exception of electricity and farm machinery, the household ran much as our ancestors’ did– especially when the power lines went down. In times of crisis, lo-tech prevailed over hi-tech.

In critiquing and editing, I’ve come across a number of anachronisms, for example LEDs in the 1950s and children betting $50 on marbles in the early 1900s. In a Wild West desert scene, a desperately thirsty protagonist stumbles into a remote cabin and turns on the tap… I explained that not only should there be a hand pump, it might need to be primed if its leather gaskets had dried out.

But I failed to convince one writer that early 1800s slaves would not be drinking out of tin cans, which wouldn’t be invented and commercially available until the next century.

I will surely look up Judith Flanders and the everyday life!
I have found Gotham, a big fat history of New York very useful for mt Madame Selina stories.
Six generations on a farm! Why haven't you committed some of this to print Leigh. It sound like a literary gold mine!

Another useful book: The value of a dollar : prices and incomes in the United States, 1860-2009
Scott Derks.