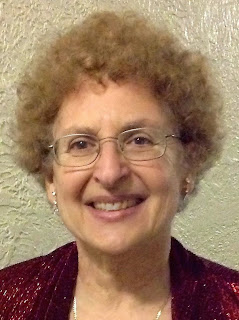 I completed the first draft of my first potentially publishable mystery in October 2002. (The less said the better about three manuscripts in the 1970s, although an agent who's eminent today tried to sell them.) Since 1993, I'd been running around saying, "Some day I'm going to write a mystery titled Death Will Get You Sober." I finally did it after I left my last day job directing an alcohol treatment program down on the Bowery, which was slowly morphing from New York's Skid Row to the gentrified neighborhood it is today. My protagonist, Bruce Kohler, was a recovering alcoholic with a New York attitude, a smart mouth, and an ill-concealed heart of gold. 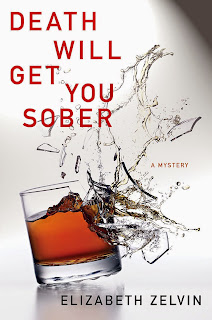 Everybody who heard the title loved it except my first agent, who specialized in romance and cozies. She thought she'd have less difficulty selling a series with punchy one-word titles like Carol Higgins Clark's, which include Decked, Snagged, and Iced. (Not to be snarky about the Clark women, who are lovely, she'd have sold it a lot more easily if I'd been Mary Higgins Clark's daughter.) I remember pacing back and forth in my living room, phone to ear (quite a feat, since this was long before I had a cell phone), begging her not to make me change my title. Not only was Death Will Get You Sober clever and memorable, it told the reader exactly what the book was about. I had a long string of unwritten sequels lined up that did the same: Death Will Improve Your Relationship, Death Will Help You Leave Him, Death Will Extend Your Vacation, Death Will Forgive Your Debts. I won the argument, but she failed to sell the book. After many rejections, Death Will Get You Sober ended up, by a fluke and sans agent, with legendary editor Ruth Cavin at St. Martin's, who fortunately loved the title. The book was published in 2008, just before publishing began to change in the vast paradigm shift in technology, books, and the nature of reading and writing that we all know about.

Cavin rejected Death Will Improve Your Relationship but took Death Will Help You Leave Him, which appeared under the Minotaur imprint in October 2009. At that very moment, the economy tanked, and Minotaur, disappointed by advance sales and evidently blaming the author rather than the changing market, dropped me a week before the book came out. Death Will Extend Your Vacation finally sold to a smaller publisher known for picking up abandoned series. I'm grateful for that. For their decision to bring the book out as a $25.95 hardcover in 2012, when the e-book revolution was in full swing and their target market, libraries, reeling from huge budget cuts--not so much. Assuming the series was dead apart from short stories, I turned to other projects.

Enter Julie Smith, Edgar-winning author of the Skip Langdon mysteries set in New Orleans, who had recently started a small e-press, BooksBNimble. I'd known Julie since I interviewed her for the Poe's Deadly Daughters blog years before, and she'd been kind enough to blurb Death Will Get You Sober. Julie loved Bruce and his sidekicks Barbara and Jimmy and wanted to bring out the series as e-books. I tried to get her to give me final say on the titles in the contract, but she wouldn't do it. Luckily, she was happy with the titles of the three novels that had appeared in print. By this time, I had cut Death Will Improve Your Relationship by 50,000 words, and with Julie's skillful edit, turned it into a 20,000-word novella about the murder of an obnoxious relationship guru, author of a bestseller called How to Improve Your Relationship. I was not happy when she insisted on changing the title to Death Will Save Your Life. It was reasonably apt, since the denouement involved a lake, a canoe, and a Klepper kayak. But it wasn't as transparent as my title, with which I'd been living for ten years. On the other hand, it fit better on the postage-stamp-sized cover of an e-book. 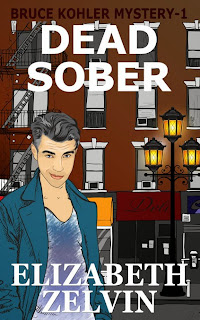 Julie's done a great job of promoting the series, which would have been long dead by now in the era of traditional publishing only. But she thinks the books could do better. She's had success at boosting sales by changing the titles and covers of other authors' books (and some of her own backlist) to attract a different readership. So in the fall of 2014 she proposed that we give Bruce a new look and the books new titles. We both knew she'd win, but I think she was surprised that I didn't put up a fight. 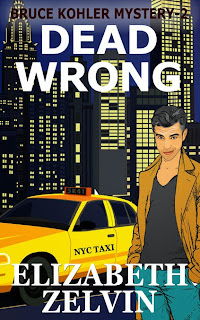 Like every writer of fiction except James Patterson, Janet Evanovich, and a handful of others, I've had to revise my fantasy of success, ie, my expectations, as the rollercoaster that publishing has become swoops and twists around. So when my mystery e-publisher is willing to invest in transforming my modest midlist novels and put her full energy into promoting them seven years after the first hardcover came out, I don't think, Oh, no! If she changes the titles, the books will be ruined! I think, Wow! I am so lucky! 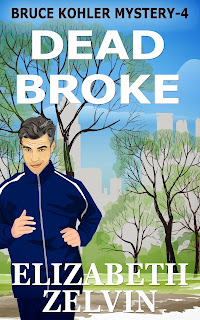 So now the e-book versions of the Bruce Kohler mysteries are Dead Sober, Dead Wrong, Dead in the Hamptons, and Dead Guru. (The short stories in the series have kept their original "Death Will" titles.) And now there's a new novel: Dead Broke, in which Bruce and Jimmy need a twelve-step program to help them deal with their money issues. The new covers feature an animé version of a sardonic, sexy Bruce. Now, there's something I'd never have come up with on my own. So far, people seem to like Bruce's new look, and I'm keeping my fingers crossed.

Elizabeth Zelvin is a former SleuthSayers regular and author of the historical novel Voyage of Strangers as well as the Bruce Kohler mystery series. Her short stories have been nominated for the Derringer and three times for the Agatha Award for Best Short Story. Most recently, Otto Penzler included her story, "A Breach of Trust," in the list of "Other Distinguished American Mysteries" for 2014. Dead Broke, the first Bruce Kohler novel since 2012, is available for preorder now and will launch on May 1. Liz is also a psychotherapist based in New York, an established poet, and a singer-songwriter with an album titled Outrageous Older Woman.
Posted by Elizabeth Zelvin at 00:01