The Wolf at the Door


I was a big fan of the first two books in Hilary Mantel's trilogy, WOLF HALL and BRING UP THE BODIES, but I'm an easy mark for that kind of stuff. Historicals have always been high on my list - Mary Renault, Robert Graves, Bernard Cornwell, Patrick O'Brian, Norah Lofts - in part because you get to inhabit a foreign world, the past, and in part because they so often turn on the hinge of Fate, or a transforming moment: think Alexander the Great, the fall of the Mongol Empire, the Black Death.

The television adaption of WOLF HALL began its run on PBS this past weekend, and I'm queer for it already. Not that it's easy, mind. (Neither were the novels.) A broad canvas, a raft of competing characters, a complex political dynamic. 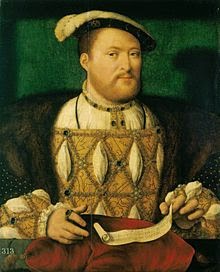 To cut to the chase, the Prime Mover of the narrative is Henry VIII's pursuit of a male heir, and everything follows from that. The rise and fall of favorites, Wolsey, Sir Thomas More, Cromwell, depend on the king's goodwill, and how effectively they manipulate the machinery of power, to get what he wants. When they don't, or can't, they're cast aside, left naked to their enemies, in Wolsey's phrase.

The interesting thing to me about the Tudors - not Henry VII so much, but Henry VIII and Elizabeth I - is that they're about to step over the threshold of the modern age. Richard III, the last Plantagenet, was the last British king to die on the battlefield, and in a war of succession. This goes some way toward explaining Henry VIII's fierce obsession with generating a son. His pursuit of a divorce leads directly to his break with Rome, and the English Reformation. (Henry's place in folklore comes from sending two of his wives to the block.) The fracturing of the Church, and the authority of the Pope, erodes secular authority, as well. There is no Divine Right, and in two generations, Charles Stuart will meet the headsman. The religious issue becomes worldly. Henry creates this, He's a touchstone for the fall of kings.

Another point WOLF HALL underlines is the rise of a commoner - Cromwell a blacksmith's son - to the office of Lord Chancellor. This is an enormous shift. promotion on merit, not the accident of birth. Ambition the spur, and Cromwell does make love to this employment, but he's neither a prince of the Church or a noble. He's nobody in the food chain, and beneath notice. A private secretary, Wolsey his patron. How he survives, and thrives, is in itself the story, that a man of mean antecedents can win the 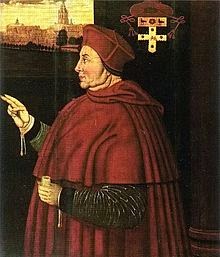 king's confidence, not because he was born to it, but by his wits.  Not that he's entirely a ruthless bastard, either. He simply knows which side his bread is buttered on, and the currency he trades on is his service to the king, in all things. It gains him preferment, it lines his pockets, and it becomes his only purpose. He lives alone for it. This hasn't much changed, today. The difference is that Cromwell can even be chosen, in an earlier age.

WOLF HALL, the adaption, isn't for the faint of heart, any more than the books were. It helps if you know the basic storyline, and what's at stake. The politics, religion and its discontents, the maneuvering for advantage. You could get lost, and Cromwell himself is an unreliable narrator, a shape-shifter. You don't really know whether to trust him or not, and neither does anybody else. He seems all things to all men, but once you understand that what lies beneath is the fury of the king, and whether onstage or off, that it's Henry who whips the horses, then if they die in the traces, he's been well-served, at whatever cost. We hang on princes' favors, Wolsey says. (I'm quoting Shakespeare, here.)
" ... I have ventured,
Like little wanton boys that swim on bladders,
This many summers in a sea of glory,
But far beyond my depth."

Is it a cautionary tale? Not exactly. It's about dangerous men in dangerous times, and treading water in the deep end of the pool. 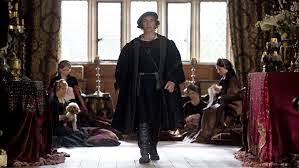 Loved the books- not sold so far on the TV. One thing that has interested me is how much the commentary on Thomas Cromwell has been influenced by the laudatory views of Thomas More in a Man for All Seasons. Certainly the Cromwell of Wolf Hall is a most sympathetic character

Damn, I way behind on historicals. You've mentioned authors I haven't encountered. (sigh)

We watched episode one last night and were transfixed by it. The dialog is stunning. And David is right -- a basic understanding of what's going on sure helps when you dive in.

And on that note, a funny story. Back in the early 1970s when I was a first year law student we had a class called "Legal Systems," which was sort of an outline of how our legal system evolved. Well, part of the class -- a small part -- was the history of how the common law separated from ecclesiastic law. Came time for the final and I was studying on a Sunday. And it started to snow. My mind wandered and I looked out of the window more and more, at the book less and less. Then I noted that David Copperfield was on TV -- one of the few W.C. Fields films I had not seen. So I thought "what the Hell?" The prof would never ask a question about the split off of common law from ecclesiastic law so why study that? Instead I watched the movie.

The next day the test questions were passed out. Three questions. Number 3, 1/3 of the grade for the course, was "trace the separation of common law from ecclesiastic law."

I froze, but then took a deep breath and remembered Douglas Adams' advice: "Don't panic." I thought about the movies that I had seen, including A Man for All Seasons. And I thought about the earlier PBS series The Six Wives of Henry the Eighth. I sketched an outline and started writing.

At one surreal point in the enterprise I remember commenting on Cardinal Woolsey and wanting to add "who was wonderfully played by Orson Wells."

When the test was graded I received the highest "A" in the class. On that third question the prof wrote "Very Able!" at the top of my essay.

I love the books, and I enjoyed the first episode of the TV series. My only quibble is that the actors are so much thinner than the (overly?) well-known portraits of Henry VIII, Cromwell, and Wolsey - all of whom were EXTREMELY hefty men. But then, of course, times have changed. In the 16th century, physical weight proved power and privilege; today, thinness proves it. (Today, Wolsey's extreme weight would be considered proof of his lower-class origins...)

I like the way Mantel's view of the Tudor world balances Shaw's view ("A Man for all Seasons") view. Both recognize the deadly game that politics is when you are dealing with an absolute monarch, who can have you killed at any moment, and innumerable nobles who are all scrambling for scraps from said monarch's table, and a brewing religious war - back when religious wars scared the crap out of everyone because they really believed that their souls might go to hell if they chose the wrong side... (One of the problems with today's politics is, I believe, that we think the Sunni-Shiite split is much ado about nothing. Think back to the Tudors.)

Sorry, in the above post I meant Robert Bolt, not Shaw...

Eve: Yes, it was the wonderful Robert Shaw who played Henry, and Bolt who wrote the play. Orson Welles had the Wolsey cameo - and certainly corpulent enough. I agree, they were in fact pretty chunky guys, by and large, but we remember Henry VIII from the Holbein portrait, later in life, and he was actually a thinner, good-looking guy, earlier on, somewhat the Golden Boy, it happens. (Damian Lewis says Henry was immensely proud of his fine-tuned calves, and since he, Damian, has spindly shanks, they costumed him in thigh-high boots.) The religious wars were a Reign of Terror. If you read Tuchman's A DISTANT MIRROR, it shows how utterly terrifying it was.