by Melissa Yi
When I first saw a few book trailers, I wasn’t impressed.
My writing friends jumped up and down, crowing over their short movie-ish ads for their books, while everyone else gathered ’round to praise them, I thought, You know who makes good movies? Hollywood. Bollywood. Nollywood (Nigerian film-making.) And I’d be remiss if I didn’t mention Hollywood North (Canada), but there’s a whole international list here.
You know who didn’t make the list? Writers.
And anyway, I’m not a huge TV or movie person. I like to read. I put my head down and continued to hone my writing skills.
But when Vuze approached me this year and suggested a book bundle, they specifically asked for book trailers.
I could’ve gone the easy route. On Fiverr, you can get one for $5. Some of them are not bad.
But I’m picky about how my work gets represented. I want better than not bad. So I started Googling, and this is what jumped out at me: you can make your own book trailer on iMovie for the Mac or Windows MovieMaker.
Artistic control, right at my fingertips. Right on. I already had images from my book covers and from poking around on morguefile.com. I researched free music for commercial use and particularly liked FreeMusicArchive.org. You can even tick off that you want commercial use. I wanted something upbeat, to contrast with the darker medical images, so I chose The Freak Fandango Orchestra’s "Requiem for a Fish."
Et voila!
Code Blues now had a book trailer!

Then I realized that, on iMovie, they have pre-made trailers, complete with pulse-pounding music and template suggestions. Of course, you run the risk of everyone else making the same trailers, but I chose unique images off of FreeStock.ca, DeviantArt.com, and well as my own photos. Just like I have an unusual writing voice, I have a (strange, deviant) eye, so I wasn’t worried that anyone else would copy me.
That way, I got the book trailer I love best of all, Notorious D.O.C Blogger can't handle movies larger than a gig, though, so BOO. You'll have to click on the link.
Finally, I wanted a fast and furious trailer for Terminally Ill (click to view). For the first time, I incorporated video instead of stills, and paid for some stock. Even better, though, a slackwire artist named Pierre Carrillo gave me permission to use footage of him starring as the escape artist in the book.
Making book trailers made me exercise a whole different part of my brain. I’m not going to lie, it took me hours, and may not be worth it to other writers/publishers with precious little time, but I seriously enjoyed it. One of my book club members said, “That was sick! Can’t wait to see the movie.”
But one of the other book clubbers said, “I don’t like movies. I like to imagine the characters in my head as I’m reading. I don’t want the movie to interfere with that.”
And of course, many serious readers think the book is better than the movie. You get more interior viewpoints, more complicated plots, more setting.
Here’s what I think: like most things in life, it’s a Venn diagram. 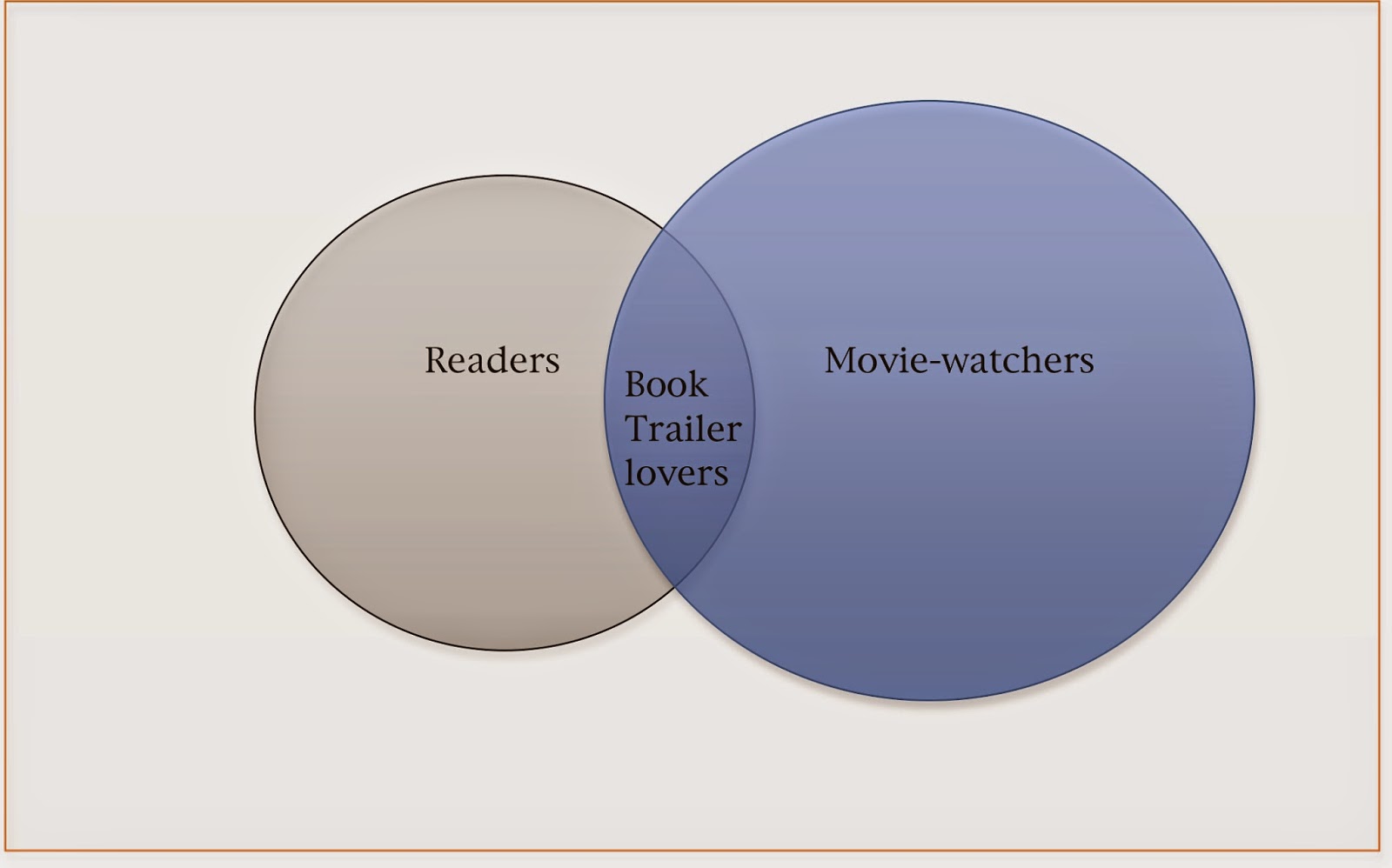 Since I want the world to discover my stories, ideally before I die, I’m going for as big a piece of the pie as possible. That means that, time permitting, I’ll make more movie trailers. And whatever else it takes. People who don’t like them can ignore them. The ones who like them? Maybe they’ll pick up my books. I got a different audience “liking” my trailers on Facebook.
And my eight-year-old son, Max, suddenly got interested in my books and asked to read them. I told them they were R-rated, but he was still curious, asking questions like, “Who is Hope Sze going to marry?”
Minister and author Kate Braestrup theorized that church is designed to stimulate the temporal lobe, using all the best tactics the 18th century had to offer—the beauty of architecture and stained glass and organ music—releasing hormones and making people want to come back to church…
I was like, Huh. I want to stimulate the temporal lobe and make them want to buy my stories. I’d better use the best tactics the 21st century has to offer.
I notice it working on me, too. My absolute favourite song of 2012 was Call Me Maybe, not because I’d heard it a billion times on the radio, but because of Steve Kardynal, the Chatroulette guy (if crossdressing doesn’t offend you). A visual component made all the difference. More recently, I hadn’t paid attention to Taylor Swift’s Blank Space until her video.
So what do you think? Yea or nay on book trailers?
Posted by Melissa Yi at 00:01