The May 2015 issue of Alfred Hitchcock Mystery Magazine showed up in my mailbox a couple of weeks ago. And, just like last year's copy of the May publication, their humor issue, both our John Floyd and I had stories in it. John's story, "Dreamland," was a funny piece about a man who might have watched too many movies. Uh, wait a minute here, John. About this watching too many movies thing, the circumstances are starting to sound pretty familiar. By any chance is your main character patterned after someone we all know? 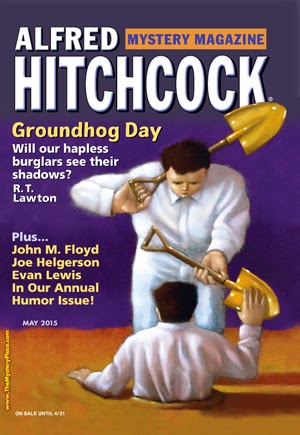 As for my story, "Groundhog Day," it's the seventh out of eight purchased by AHMM in my Holiday Burglars series. In short, my two burglars, Yarnell and Beaumont, had the misfortune to be caught red-handed in the midst of opening a man's safe and are now trying to dig their way out of trouble and into another man's mansion in order to steal a treasured item the first guy says really belongs to him. Seems you just can't trust criminals these days. However, if it wasn't for dumb luck, Yarnell and Beaumont would be pushing up daisies. Naturally, The Thin Guy, their protege, usually manages to sneak into the situation, whatever it is. No worries, the main characters have to survive so they can appear in the eighth story, "May Day," to be published in some future issue of AHMM.

What I really liked about this issue was the cover. "Groundhog Day" made this May cover with artwork depicting two men with shovels in hand. One man is helping the other man out of a hole in the ground. I can't say that the artist's perception of Yarnell and Beaumont is the same as mine, but then like John and I discussed in recent e-mails, he and I tend to follow Elmore Leonard's way of describing story characters when writing. We use minimum description and let the reader form his or her own picture of the characters. So, I'll say nice artwork and I'm really happy to have my story on the cover of Alfred Hitchcock Mystery Magazine. 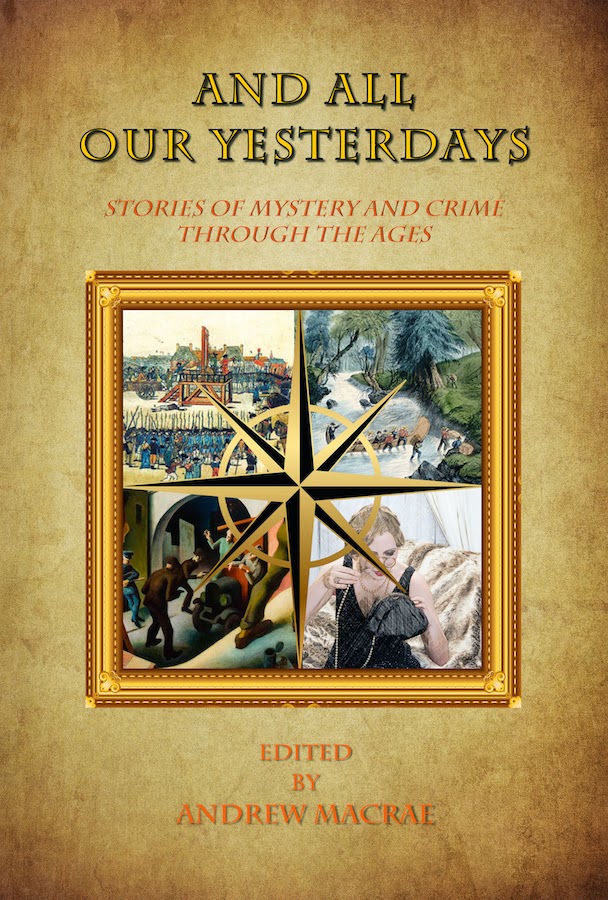 Also about the middle of March, my short story, "A Private Matter," came out in a paperback anthology entitled And All Our Yesterdays. For this story think Leo Tolstoi and the Cossacks. Here, a wandering Armenian trader of goods gets pulled into becoming a gentleman's second for one of two Russian officers preparing to fight a duel in the Wild Country south of the Terek River in Chechen territory. Treachery abounds and the trader ends up holding the bag, but he has his own solution to rectify matters.

A couple of years ago, our David Dean mentioned he was writing a short story about a duel. Since I too had a duel story in progress, we exchanged e-mails. (I really like that communication factor in this group.) As it turned out, I didn't have to worry about two stories featuring duels being submitted to the same market in the same time period. David's story, "Her Terrible Beauty," went to Ellery Queen's Mystery Magazine, March/April 2015 issue and mine came out in the above mentioned anthology.

Nice story in EQMM, David. It'll probably get another place in the next EQMM's Reader Awards.

Side Note: All three of my above mentioned stories were critiqued by our Rob Lopresti prior to submission for publication. Thanks, Rob.