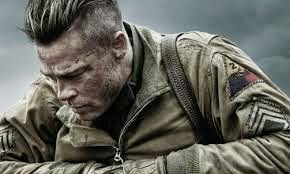 Okay, so it's a Brad Pitt picture, but forget about that Quentin Tarantino nonsense, and it ain't TROY. Brad Pitt's actually a good actor, not just a pretty boy. He himself once remarked that Hollywood is full of pretty boys, and whether or not you get noticed is by and large blind luck. In other words, don't take it for granted, and show up on time for the audition.

If you've read the Max Hastings book ARMAGEDDON, you get a convincing and frightening overview of the last year of the European war, from D-Day to the fall of Berlin. It was a savage, gruesome fight, with very little quarter given, on any side. FURY, like SAVING PRIVATE RYAN, is about a small engagement. It's 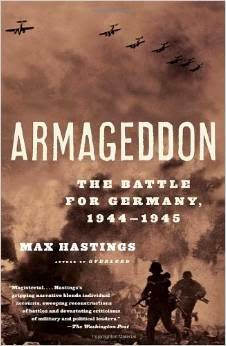 a platoon movie, in effect, a bunch of guys in a tight, claustrophobic space - a Sherman tank, this time around - hoping to make it through the war alive. Shermans were outgunned by the German Tigers, which had better armor and heavier weapons, and a direct hit could turn the American tanks into flaming coffins. Tanks are in fact ungainly and vulnerable, steel boxes with only a few exits, and FURY puts this across in clenched interior shots, most of which seem to be from underneath a guy's cramped knees. You don't get much in the way of omniscient viewpoint, or a sense of any larger battlefield strategy.

Are there generic conventions? I'm not sure war movies can avoid them. The hardened NCO, the green recruit who turns stone killer. The story arc with this kind of picture is usually about initiation, the learning curve, the so-called warrior mindset. I don't have a quarrel with it, but it's a narrative device. Although it rings true, it's still a contrivance, and over-familiar. And then there are things in the movie I wasn't right with. They execute a German prisoner in cold blood. Yes, no, maybe? We know there were incidents like this, even if they didn't make it into the record, or it was reported as shot trying to escape, but the way it was presented, as an object lesson, made me hesitate. Another thing that bothered me was seeing the tanks take point, with infantry creeping along behind. It seems like sound tactics - why expose yourself to enemy fire? - but I always had the impression armor and infantry leapfrogged each other on patrol, feeling out a hostile environment. Maybe somebody here with more hands-on can steer me right. Having said this, otherwise the movie felt honest. I didn't find it exaggerated or false.

Once the Allies pushed across the Rhine - and the Russians crossed the Oder from the East - Germany was finished. The question people ask is why they kept fighting. One answer is of course Hitler's insanity. Another is simply that the Wehrmacht was under discipline, even that late. And yet another is that they were hoping they could hold out for a negotiated peace in the West. Germans were terrified of what the Soviet armies would do to them, as conquerors, and their worst fears were realized, when the Russians did get there. If the Germans could hold the Eastern Front and buy time to make a deal with the U.S. and Britain, they might save themselves. It was a long shot, and never came to pass. In the end, Germany suffered total defeat, and the Russians sacked Berlin. Fury, indeed. More than enough to go around. 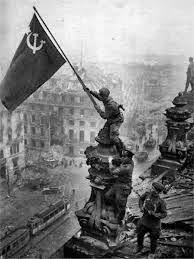 War pictures aren't necessarily everybody's cup of tea. The famous early ones, like ALL QUIET, are famous in large part as anti-war stories. And guys like Wellman and Ford - who weren't shrinking violets - made some ambiguous pictures between the wars. 'Between' the operative word. The movies that came out of American studios during WWII were flag-wavers, how not? Then a little doubt begins to creep in. There's a story I heard that somebody, and it might have been Wellman, told Lewis Milestone he thought A WALK IN THE SUN was fake from beginning to end, which is pretty strong. Point being, is authenticity the sell? And say it is, are you obligated in any way to watch these movies?

BAND OF BROTHERS more or less sets the bar, for my money. I own the boxed set, and I've done the whole thing three or four times. Then again, I had a girlfriend a few years back, who was a screenwriter, and she hated war pictures. Hated. I told her the screenplay for PATTON was a model of movie architecture, but she couldn't bring herself to sit down and plug in the DVD. I get it. The single most effective sequence in PATTON, to my mind, is the war prayer, the voice-over. It also happens to be the only scene where you see men stumble and die, the snow around them lit up with artillery impacts, and you count the cost. Where to draw the line? I haven't fully made up my mind.

We're saturated with images, some real, some imagined, and all of them manipulated for effect. They make us uneasy, or uncomfortable. There's a squirm factor. Robert Capa's famous photograph of a Spanish Civil War solder in the moment of his death, or the Saigon police chief, putting a bullet in the head of a 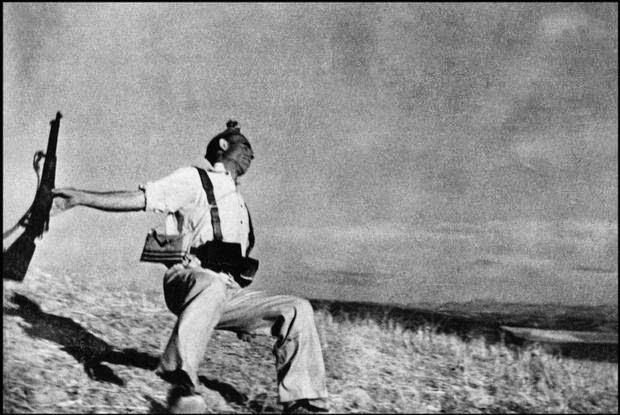 VC suspect. Do we need another one? FURY reminds us, I think, that war is a bitter business. Good men die. Sometimes they die for dumb-ass reasons, bad generalship, unnecessary objectives, being in the wrong place at the wrong time. It's not about the irony. It's that we seem to be hard-wired for the warrior gene. Which is still too convenient an answer, that the fault lies in our stars. Perhaps we're drawn, by instinct and muscle memory, to the elemental. To the point of no return, a place where choice determines nothing. We're in the hands of God, or mischance, and death is only the final accident of life.

The dead speak to us from a place we can't know, but we can hear their voices, if we listen for them. The lessons of war can be heard in the voices of the dead. They become interpreters. In this narrow sense, then, war stories have something to tell us. Of course, it's a mixed message.

What a fine piece, David, and a lot to think about.

As to the tank/infantry question, the answer as to who leads is largely determined by the terrain and weapons faced. In open country, for instance, the tanks might very well lead with infantry using them for some cover. In an urban environment the infantry might take point to spot and identify targets for the tanks before bringing them forward, as their maneuverability is so constrained in that setting. But none of this is writ in stone since battlegrounds are so fluid.

Great column, David. I saw Fury a few weeks ago, and thought it was a realistic and powerful film. And I agree, Brad Pitt did a good job.

Not that it matters, but my favorite war movies are probably Stalag 17, Platoon, The Great Escape, Saving Private Ryan, Zulu, The Blue Max, Apocalypse Now, and (sorry, I can't help myself) The Dirty Dozen. My favorite war novel might be Matterhorn, by Karl Marlantez.

Sorry, I'm afraid I'm one of those that can't abide war movies, too many relatives and friends died in war.