Though, in my mind,  publication of nine fiction books gives me a license to lie, I'll be truthful with you. I was not enthusiastic about blogging today.

I've recently been promoting Callie's A Corpse Under the Christmas Tree, trying to decide where to launch KUDZU RIVER, making changes suggested by the editor in The True HAUNTING of JULIE BATES, and expanding "An Odor Yet to Come" from its original short story form to a full-length horror novel. With all of this plus the holidays and three immediate family birthdays (as well as my own) in December, I hadn't given much (correct that to "any") thought to blogging.

In addition to all of the above, I became "a lady who lunches" during December, having had the pleasure of lunching with several long-time friends who were back in SC for the holidays.  One of them is a talented artist who moved to New York when we graduated from USC way back when. (Remember, Dixon, USC is the University of South Carolina as well as Southern Cal.)

"If you haven't read it already, you need to read this," my friend said and handed me a paperback with an orange cover as I joined him in my favorite Italian restaurant.

"Is it a mystery?" I asked.  I read a lot of books that aren't mysteries, but that genre is my "go-to" for relaxation.

"Look at the first line on Chapter 7, page four," he said.

Seven chapters by the fourth page?  But I opened the book to page four.  It read "This is a murder mystery novel."

"Didn't you teach students with Autism?" he asked and then continued without waiting for my reply.

"This book is written from the point of view of a fifteen-year-old boy with Asperger Syndrome."

I dropped the paperback into my purse, and we had a wonderful visit over our lunch of shrimp and lobster risotto with amaretto bread pudding for dessert. (Yes, I realize that's a high-carb lunch, but we were celebrating.)  I didn't think any more about the book until that night.  I planned to read only a few pages, but I didn't put it down until the last line, which happened to be Chapter 233. (More about that later) 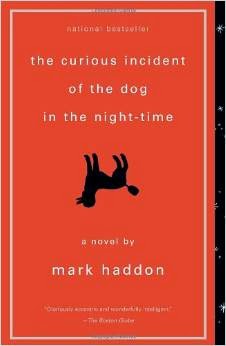 The book is the curious incident of the dog in the night-time by Mark Haddon. (Absence of capital letters is Haddon's decision, not mine. As some of you know, I LOVE using caps.)

It's not a new book.  It won the Commonwealth Writers Prize in the Best First Book category in 2003 because it was Haddon's first novel for adults though he'd been previously successful in children's literature.  He also won the Guardian Children's Fiction Prize for the curious incident of the dog in the night-time that same year because though Haddon called this his first book written intentionally for adults, his publisher marketed it to both adult and child audiences.

Christopher, the first-person narrator, shares characteristics with several Autistic individuals I've known, and Haddon doesn't tell them--he shows them.  There are 233 chapters because Christopher has a fondness for prime numbers and uses them instead of cardinal numbers for chapter headings.  He only eats foods that are red or green.  His parents expand the variety by adding red food coloring to less colorful dishes. Christopher is brilliant in math, but he is terrified by new experiences.

Is this a murder mystery as the author proclaims?  Well, there is a murder.  The story opens when Christopher discovers a neighbor's dog stabbed to death with a "garden fork" stuck completely through and anchoring the body to the ground.  A "garden fork" is what we call a pitch-fork here in the South.  He decides to investigate and solve the murder and to write a book about how he does it.

The Boston Globe described the curious incident of the dog in the night-time as "gloriously eccentric and wonderfully intelligent." There are five pages of acclaim for the book at its beginning.

As I usually do when I enjoy a book, I sought more information about the author.  Mark Haddon was born in 1962 in Northampton, England.  He wrote his first book, Gilbert's Gobstopper, in 1987 and followed this with several more children's books, many self-illustrated.

One of the things I found interesting about Haddon is several Internet sites about quotes from him concerning writing. Three of my favorites are:

Reading is a conversation.  All books
talk.  But a good book listens as well.
Mark Haddon

Most of my work consisted of crossing
out.  Crossing out is the secret of good
writing.
Mark Haddon 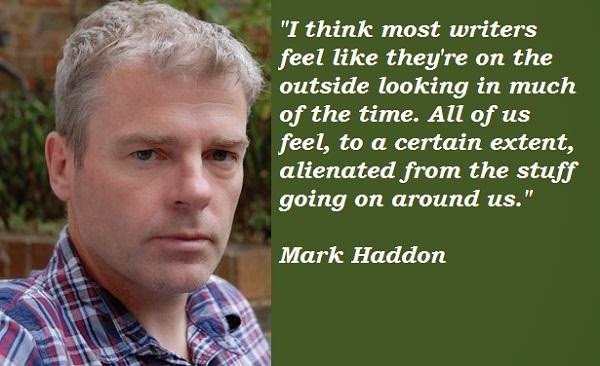 The second quote is especially true of my own writing because my rough drafts tend to ramble and require a lot of crossing out.

Reader questions for today:  Was I just out to lunch in 2003 when the curious incident of the dog in the night-time was published?  How many of you had heard of this book before today?

Have you read other books that claim to be mysteries, but turned out to be far more?  If so, what are they?

Do you ever read genres other than mystery just to study some aspect of the writer's style?  If so, I recommend the curious incident of the dog in the night-time as an excellent study in voice. (Besides, if you don't read it, you won't know who killed the dog.)

I've shared before that there are writers with whom I would like to have spent some time. Examples: I would really love to have sipped some (maybe a lot) of bourbon with William Faulkner.  I met Mickey Spillane in his later years, and I'm Christian, but I would like to have known him before he became religious. This list could go on forever, and perhaps, due to John M. Floyd's influence, one day I may use that list as a blog-starter and even add some writers I wouldn't care to visit and why. I'd be willing to pass up my two favorite lunches (prime rib and/or lobster) to have lunch with Mark Haddon to talk about writing even though he's a vegetarian.