My SleuthSayers colleague Fran Rizer, author of the Callie Parrish mysteries, has tagged me for the Meet My Character Blog, so here goes with Francis.

Name of character- real or fictional?

Francis Bacon, gay bon vivant and painter. He’s both real and fictional in that, yes, there was a real Francis Bacon, Anglo-Irish artist, creator of images of screaming popes and the now ultra valuable triptychs. There is also my character, whom I think of as FB, who resembles the original but who, after three novels, has begun to take on a distinct personality, doubtless better known to me than to the original. 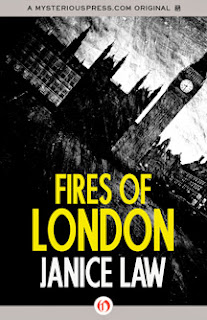 When and where are the books set?

The first novel, Fires of London, was set during the Blitz. The second, Prisoner of the Riviera, was set immediately after the war in London and along the French Riviera and drew heavily on holidays at San Raphael, a charming small town a half hour from Cannes. The last, Moon over Tangier, was set in the International Zone in Morocco in the early 1950’s.

What should we know about FB?

Someone described the real Bacon as “camp as an army base and tough as old boots,” a nice summation for a very complex character. I’ve tried to keep some that complexity for FB as well. For instance, if you know that he was a promiscuous gay man fond of rough trade, you form one impression. When you then learn that he lived with his adored old nanny until her death, you revise the picture more than a little bit. 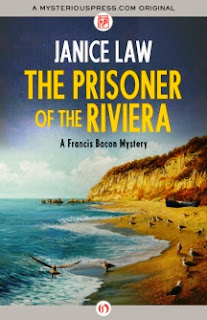 Similarly, although he was a militant atheist, his great subject was the crucifixion and it is really too bad that he was never commissioned to paint an explicitly religious painting. Early and late, painting was the key aspect of his life and the creation of works on canvas kept an otherwise rackety and dangerous existence under control.
Conflict in his life?

The real man had plenty, having been kicked out of his home at 16 for trying on his mom’s underwear. He was fond of makeup, too.

In the novels there are two regular sources of conflict: the forces of law and order that want to make use of his expertise and the motorized vehicles that always seem to give him difficulty. The Blitz presents additional problems in the first novel; blood feuds surviving in post-war France complicate the second, and in Moon, the famously spy-ridden International Zone presents a cornucopia of difficulties. 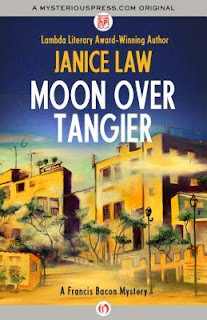 Pleasure and excitement and successful canvases. FB likes drinking and good food and carrying on and handsome men and painting, first, last and always. In the novels, survival is also a big imperative.
Where can you read about this character?

In the trilogy comprised of Fires of London, The Prisoner of the Riviera, and Moon over Tangier, all from mysteriouspress.com in ebook or print.
Posted by Janice Law at 00:00