This is about a personal enthusiasm - although I might not be the only one, if you're into older, classic movies - and it's also a little bit about eating crow. 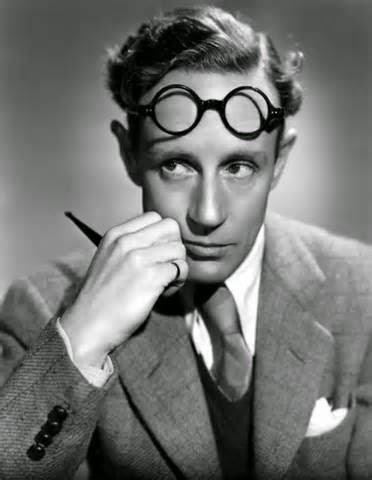 Leslie Howard was a big star, between the wars. He made his bones as a stage actor, and then hit the big-time when he came to Hollywood. His best-known pictures are THE SCARLET PIMPERNEL, PETRIFIED FOREST, and, of course, GONE WITH THE WIND. As it happens, he hated playing Ashley Wilkes. He thought he was way too old for the part, and he remarked that when they got him in costume, he looked like "that sissy doorman at the Beverly Wilshire." Which raises the following question.

I always thought Leslie Howard was kind of effeminate. He certainly camped it up in SCARLET PIMPERNEL. But it turns out, in real life, that he was a disarming charmer, who may very well have slept with most of his leading ladies. ("I don't chase women, but I couldn't always be bothered to run away.") That languid persona he developed for the movies wasn't him at all. He was in fact an earthy kind of guy.

He was also extremely loyal to his friends. The story goes that when PETRIFIED FOREST was made into a movie, from the stage play, Warners wanted Eddie Robinson for Duke Mantee - the character based on Dillinger - but Howard held out for Bogart, because they'd done the play together. Bogart runs away with the picture, and it made him an A-list star.

Howard was deeply loyal to England, as well. He described himself as a man with two homes, America, which had made his fortune, and the UK, where he was born. When the war broke out, in 1939, he went back, and he wasn't the only one. There was a big Brit colony in Hollywood, and some of the guys who could have made a bundle, sitting the war out, went home instead and applied for active service. David Niven, for one, had been to Sandhurst, and was commissioned in the Highland Light Infantry, before he got into movies, and he got his commission back. Noel Coward, who was arguably the most famous of the Brits expats at the time, volunteered for war work, and found himself seconded to the Secret Service. All three of them wound up making propaganda pictures, too. Niven did THE WAY AHEAD, Coward wrote and directed IN WHICH WE SERVE, Leslie Howard put his shoulder to the wheel with 49th PARALLEL. 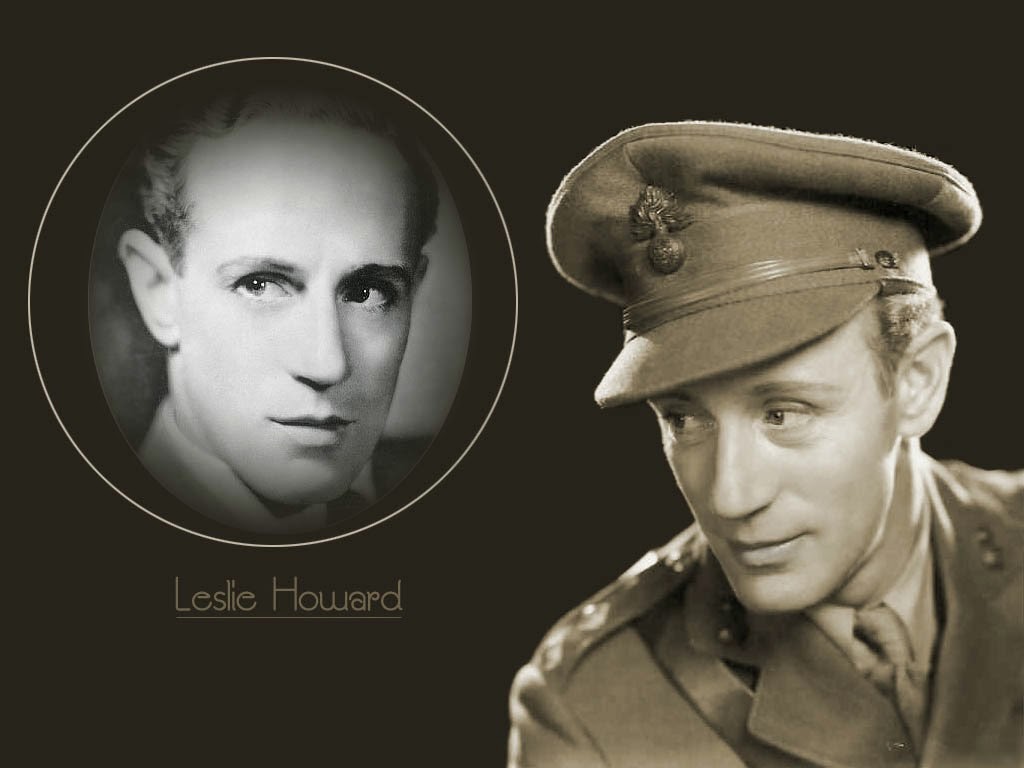 Niven and Noel Coward survived the war. Leslie Howard didn't. He was on a civil aircraft, flying to Lisbon, when the plane was shot down by German fighters over the Bay of Biscay, in 1943. There's a lot of speculation about this incident. For one thing, the Luftwaffe pilots were operating well beyond their normal patrol zone. For another, did German intelligence know Howard was aboard the plane? Evidence suggests they did. A lot of the German spy nets in Britain had been rolled up or turned, but some were still active, and it wouldn't have been that hard to get the passenger list. Howard was regarded by the Germans as a very able and dangerous propagandist for the British war effort, even possibly a covert agent. But maybe he was simply in the wrong place at the wrong time.

Knowing how he died, if not exactly why, puts a different spin on things, in retrospect. Here's where I eat crow. Maybe he really was the Scarlet Pimpernel, masquerading as a hapless fop, an exaggerated stage Englishman, languid and fey. Far from it, it appears.


What changed my mind about him is 49th PARALLEL. This is one of the many collaborations between Michael Powell and Emeric Pressburger - the most celebrated being THE RED SHOES - but the real muscle behind it is Leslie Howard, who takes no on-screen producer credit. In brief, here's the storyline. It's 1939, and Canada, as a Commonwealth country, has entered WWII in support of Great Britain (the US, as yet, is still sitting on the fence). A roving German sub attacks Allied shipping off the east coast of Canada, and is then hunted down and sunk, but they've left behind a landing party, sent ashore to forage. The surviving U-boat crew tries to evade pursuit, and runs all the way across Canada. Little by little, their numbers are whittled away until only one of them is left.


The trick of the movie is that the fugitive German is the common thread, although he's not sympathetic, but he meets all manner of people while he's on the run, Eskimos, Hudson Bay trappers, Hutterite farmers, Indians, you name it, and it doesn't make a dent. He's a convinced Nazi, and his exposure to these other people only hardens him in his conviction. You'd think he was on a journey of redemption, but it ain't so. 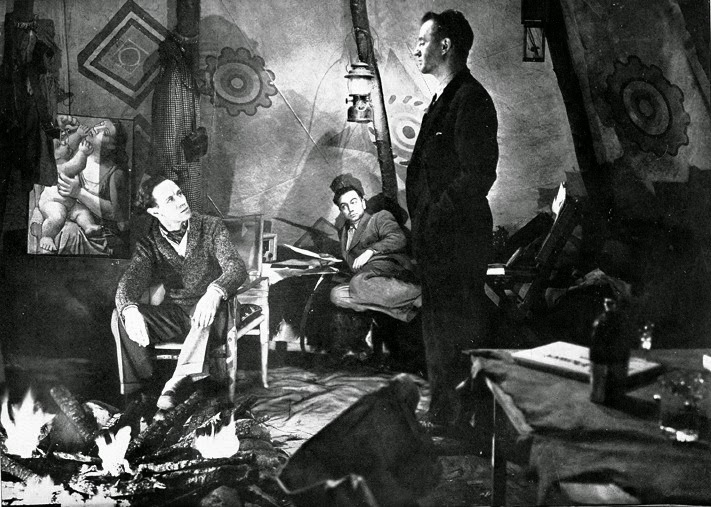 The line-up of cameos is pretty amazing. Laurence Olivier, Finlay Currie, Anton Walbrook, Glynis Johns, Raymond Massie, Leslie Howard himself. They play the characters whose lives the German interrupts, and it's no stretch to imagine Howard, as unnamed executive producer, getting them on board. What - a couple of days on the shoot, and ten minutes of screen time? Olivier, bless his heart, is terrible, phony French trapper accent and all. But when, near the end, you get to the Leslie Howard scenes, it's incredible. He plays his trademark lightweight, silly and dandyish, a sheep to be sheared, and then he suddenly turns into an Old Testament revenge figure, iron in his bones.

So who was he, really? A shape-shifter. A guy who worked at his trade, enjoyed it enormously, and made good money at it. He once remarked that an actor can't conceal himself. He did a fair job of it, though. The mystery of Leslie Howard isn't in his self-deprecating appeal, but in what he didn't often show. The naked steel.
Posted by David Edgerley Gates at 00:01

Great post! I've always liked Leslie Howard's films. The Petrified Forest is a favorite -- it has so many great lines.

The Scarlet Pimpernel is my favorite, though he made many excellent films. My wife has always been a big fan of his, and thought Scarlett (there's that word again) got it right by falling for Ashley. Enjoyed the post, David.

He was a great favorite of mine- and my mom's- back in the day of late black and white movies on tv.

Interesting to learn about his off screen life- now there's a plot possibility!

Great post! I think we leap to the assumption that everyone thought Leslie Howard was effeminate (and yes, he did camp up The Scarlet Pimpernel because that's what TSP did), but he was hugely popular in his day among the ladies who only saw his screen persona. My mother thought he was sexy as all get out, which always bewildered me (different generations). I actually think that was a style at the time among British actors (Howard, Niven, Harrison, etc.) and heros (Lord Peter Wimsey and Albert Campion leap to mind); and there is also an urban style of male "effeminacy" that has fooled the hell out of a couple of my friends. "He's gay, isn't he; why is he asking me out?" "Go out with him and see." The next day: "Wow!" I can't explain, I just report.

I wonder if the proper definition for this sort of guy is perhaps that old phrase: "A Lady's Man" -- a man other men might not feel very comfortable around, because he presents a certain surface impression, while he's actually quiet willing to woo the many women who find him secretly desirable.

Reminds me of a friend I had, many years ago. This guy was often mistaken for being gay, largely because he was the only male on the school cheer squad. When the jocks had their backs turned, however, he was almost always busy . . . er, physically demonstrating his true nature, shall we say . . . to the lovely cheerleaders -- repeatedly! And much to their delight. I warned him that he'd be toast if word ever got out. However, when one of the girls let the cat out of the bag during a breakup argument with a boyfriend, it made no difference. Said boyfriend didn't believe her; after all, my friend was clearly gay! LOL

@Dix: There's a remark attributed to Cary Grant, that the sure way to get a woman interested in you is to tell her you're impotent - and she'll want to fix it.

I'm familiar with the story about Howard saving Bogart's career. When Bogey got wind of the studio wanting to go with anyone other than him (a problem that dogged him all the way up through THE MALTESE FALCON), he sent a cable to Howard, who was salmon fishing in Scotland, asking for help.

Add that was the nearly the end of it.

Howard went on to die in the war. Bogart went on to stardom and an unlikely love-match fourth marriage to the much younger Lauren Bacall.

Even more unlikely, Bogey became a father for the first time at age 49, a son, Stephen. In 1952 he had a daughter, and demonstrated that he too knew something about loyalty.

Thanks again for reminding us of forgotten heroes like Leslie Howard, David. He deserves much more than having the manner and place of his death be an answer to a question in TRIVIAL PURSUIT.

hey david,
thanks for the wonderful post.
i have always been curious as to leslie howard's sexuality........his on-screen
demeanor seems uber affected to me. i am a gay man and have had a cinematic crush
on the guy forever! and, am not convinced that his fey or foppish behavior was manufactured for the screen.........i am a hold out for bisexuality!!

Although long disparaged, there is reason to believe that Leslie Howard acted as a British spy in Germany for about a year in WW1. And as-despite paperwork showing o/w-he may have been born in Austria, the Germans would have regarded him a traitor.