Have You Seen This Book?


by Dixon Hill
I once read a wonderful non-fiction book about a man who flew early seaplanes -- including the PBYCatalina . Though, due to his nationality, I believe he called it a Canso in his book.

He didn't start out in a PBY, however. Suffering from malaise brought on by his experience as a pilot (fighter pilot, I think) in WWI, he bought a small second-hand seaplane. He also purchased a tent, packing it and his few belongings into this fragile, floating biplane built of canvas stretched across a light wood frame. I suspect the plane may have looked a bit like the one of those below. 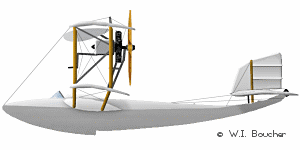 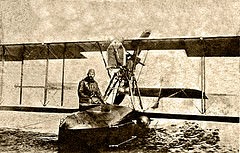 This work was autobiographical, you see, and the man who wrote it lived in Australia or New Zealand. I’m not sure he was originally FROM that down-under portion of the world; he may have been born and raised in England, or one of the other Commonwealth countries. I’m afraid I just don’t remember. I read the book too long ago. But, I know he knocked-around there after the war.

He and his dog spent a few years flying that tiny, wood and fabric seaplane from secluded inlet to unoccupied small bay, around Australia or New Zealand, sometimes venturing to a deserted island or two. They’d fly in, and he’d anchor the plane off an empty beach, fishing for food, camping on the coastline, playing with his dog, staying for a day, a few days, maybe a week or two before moving on.
He rigged a rod on a spring, which he dropped down to hang vertically from the side of the fuselage when landing at night. He called this “my fishing pole,” and used it to gauge his altitude above the waves when landing during low vision conditions—not a stupid guy. When he needed fuel or foodstuffs he couldn’t scavenge, he’d land in a harbor and find work to supply the funds he needed to keep going.

His was a happy vagabond’s lifestyle during that time, chosen in order to escape the bonds of gravity, freeing him from the earth and worldly cares. An antidote to civilization, we might say. Though, to him—and I don’t believe he ever states this outright—I think it proved an antidote to the mechanized mayhem he’d witnessed on the battlefields of Europe. A sort of mental pressure relief valve, perhaps. He took the one, really good thing he’d gotten from the war: his knowledge of aviation. And he used it to erect a gateway to the rest of his life.

He and his dog bummed around the world down under, until he was approached by a fellow looking to build a new airline there. Then, he began flying for pay, charting flyways across the continent and to local islands, with his boss, later flying passengers and freight along the routes they’d laid down. 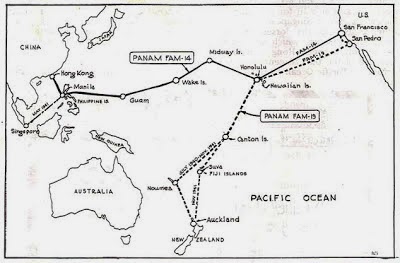 As I mentioned, I read the book several years ago. But, if memory serves me right, that airline job didn’t last too long, before he was tapped to fly anthropologists, geologists, geographers and other explorers among the islands of the south Pacific. His flying and navigational knowledge soon led to
his being asked to staff aircrews trying to set new distance records, or connect spots on the globe by air for the first time. I believe he even helped scout and establish the routes Pan American would use for their trans-Pacific flying boat service.

In truth: His writings came as an unexpected, and extremely pleasant surprise to me: an aviation book, written by an aviator, filled with technical information presented in an exciting manner, because this technical data was all part and parcel with the decades of flying adventures described in his narrative.

Over time, he found himself at the controls of larger, more expensive and more powerful flying boats, capable of covering much longer distance between refueling. I think he even wound up flying several of the early PBY models during this time, such as the aircraft in the photo on the left.

He worked with others, setting distance records, or making first-time flights between remote, tiny specs of land dotted among the vast enormity of the indifferent Pacific Ocean. An ocean known for devouring even the bones of many adventurers, swallowing them whole into its mysterious depths, leaving only a question mark to float through history. His was not a boring life. 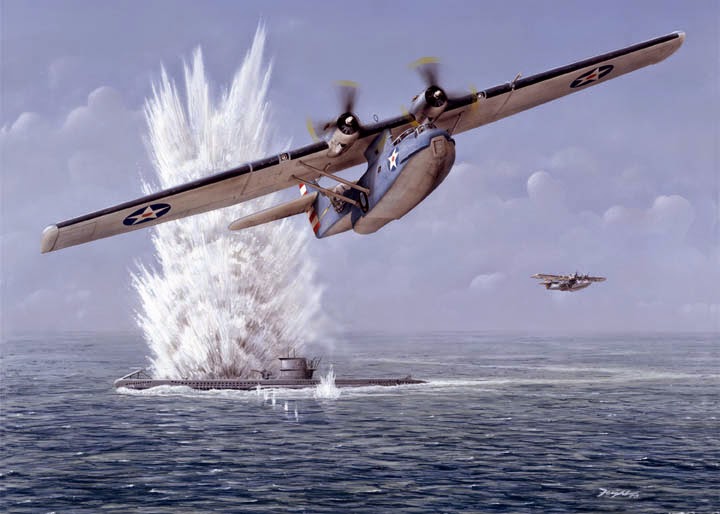 When WWII came along, he volunteered for the air corps, and was stationed in Nova Scotia, or
Iceland, or somewhere like that, flying PBY’s on search and rescue and anti-submarine patrols. After the war, he returned to the south Pacific, helping to set records by flying between South America and Pitcairn Island and Australia—places like that at least. I no longer remember most of the details.

I recall, however, that at one point, while crewing a PBY on a distance record flight over the ocean, they suddenly ran into a problem. They couldn’t transfer oil from one engine to the other, and one of their engines needed more oil, or it would soon burn out. He pulled the short straw, and thus—in mid-flight!—had to climb out onto one of the angular struts holding the wing up.

There, he tapped that engine’s oil pan and filled a can with oil. Then he struggled back inside the fuselage, clambering back out on the other side to partially fill the other engine’s empty oil pan. This process had to be repeated several times, during the flight.

Can I vouch for the veracity of such an occurrence? How could I? I have no idea if such a thing would be possible. The way he wrote it, however, I could feel his sheer terror while out on that wing strut, frigid wind whipping his hair and clothing, making his eyes water, the vast unforgiving Pacific yawning far below his tightly grasping feet and hands as the wind whipped the oil everywhere, turning the strut slick between his fingers. Yet, he presented the information almost as if saying: “Well, you know, that’s the sort of thing you had to do back then. It was just a job.” In sum, I wound up believing his story completely. I don’t doubt it at all—impossible as it may sound.

I learned a lot from this book.

I learned that the way to look for an island in all that empty ocean, was not search for the invisibly small speck of land, but to look for the clouds that always rose up over land in the middle of the sea. These clouds were the flag that spoke of the islands below, and a good pilot listened with his eyes to what they told him.

So too, he knew the proper sound and feel of his aircraft, the way I know the sound and feel of my wife’s car or my jeep. When something went wrong, he could hear it, feel it through the controls, as if the plane were a living thing in his hands. He spoke of the gauges, and what they meant—usually when describing what he suspected had gone wrong with the plane, nearly always when they couldn’t land. 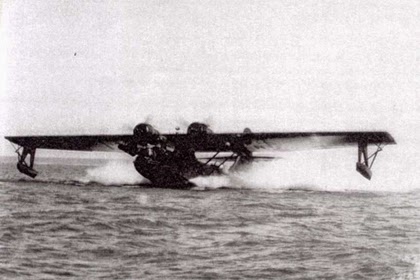 I learned that seaplanes, flying boats, can’t land on the open ocean. Not really. Not without running a high risk of coming to grief. The swells of the open sea are just too much for a seaplane to take, on landing. Instead, landing requires a bay or inlet, some stretch of water protected from such high seas, so the surface is calmer, flatter, smoother, giving the aircraft a much better chance of staying in one piece during the touch-down impact.

As I say, this book taught me a lot. But, much of it has fallen out of my memory over the years. And, now, I find I need this technical information he shared.

Unfortunately, I can’t find the book! The library I checked it out of, says it was almost never borrowed (a truly sad fact imho—It’s a glorious read!), so they sold it for probably around 50-cents.

I’ve Googled and searched and tried library sites. But, I don’t know the title or author. I’ve even tried looking up the names of men who crewed aircraft on record-breaking runs in the south Pacific—all to no avail.

So, if you, or someone you know, happens to recognize the book I’ve described, and you can give me any info that would help me find it again, I’d really appreciate it. 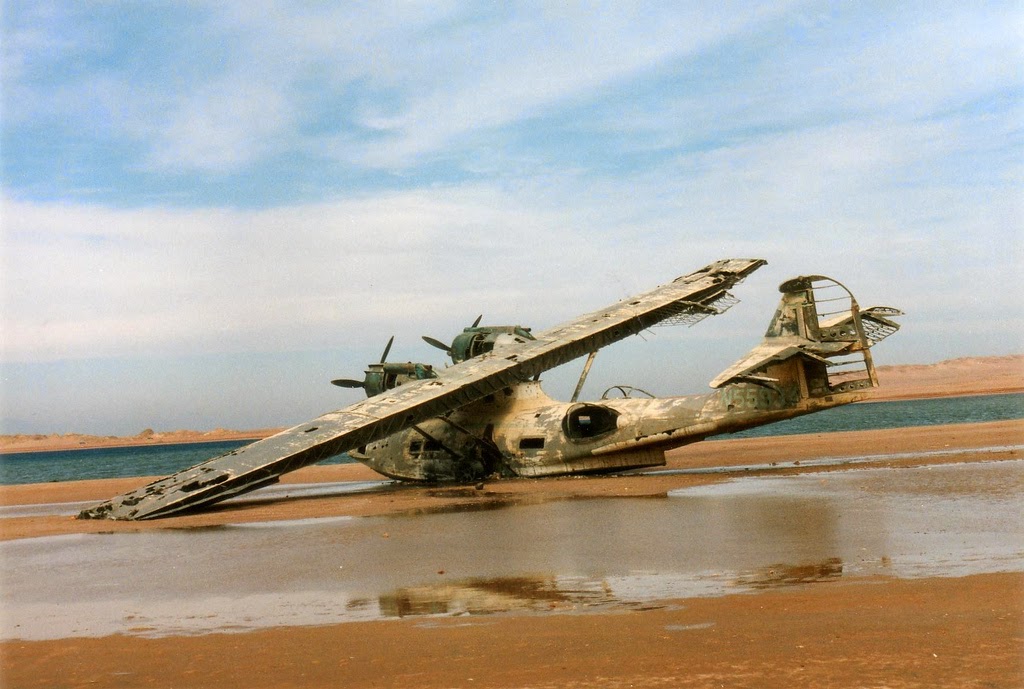 You can just place the information in the comments section. I’ll have my notification button turned on.  So, even if you’ve stumbled across this post years after I’ve put it here, please leave me any info you have: I’ll get an email notification that you’ve posted here.

Thanks! And, I hope the rest of you have gotten some little something out of this post.