by R.T. Lawton
Somewhere not too far from where you are right now, there is a person scheming on a way to make some money. It's human nature to desire an increase in our financial status so we can acquire items that we want in life or think we need. To make this money, most people go out and find a legal job, but there are always those who look to make the easy dollar, the quick buck, regardless of the legality involved. Times of war make for several opportunities.
Summer of '67

The large aircraft finally rolled to a stop. This was it, the Central Highlands. When the door opened, all passengers filed out onto the tarmac. Dressed in rumpled khaki's and low quarters, with all our allowed worldly goods in O.D. duffel bags slung over our shoulders, we lined up for the arriving green buses. Our first indication that we were now in a world different from the one we'd left behind came as the buses quickly emptied out those soldiers going back home on the same plane we'd just arrived on. Those guys in jungle fatigues, with red mud splashed up to their knees, ran joyfully screaming and hollering toward their "freedom bird." Looked like a bad omen to us new guys. 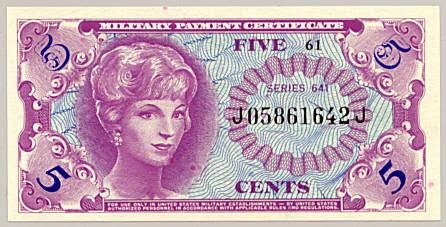 Our second indication came as other in-country soldiers, with time left before rotation back to "the World," walked down our lines quietly offering to exchange MPC (Military Pay Certificates) for good old American greenbacks. They would even pay a little over a dollar in exchange. Some arrivals went for it, some didn't. When we later arrived at the REPO Depot in Pleiku, one of the first things that happened was all U.S. currency was officially converted to equivalent MPC, all brightly colored paper bills much like monopoly money. 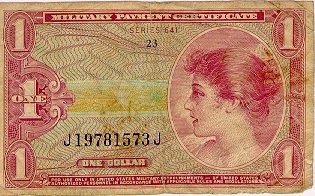 Here's how the system worked from then on. Come payday, every soldier reported to his military paymaster (usually a Lieutenant or a Captain), saluted, signed a pay voucher and received about fifty dollars in MPC. The rest of his paycheck got deposited in his bank account back in the States. The military didn't want any soldier to have a lot of money in-country and the also didn't want him to have American dollars, so they gave him MPC which was only good at the PX and other military stores in Vietnam at the time. If he went to the local village, he was first supposed to exchange his MPC for Vietnamese Piasters (so named as a carryover from Vietnam's days as a French colony, whereas the Vietnamese DONG was usually the denomination word printed on the bill itself). Officially, the conversion rate was one U.S. dollar to one MPC dollar and one MPC dollar for about 113 Piasters (or Dong). The Saigon Black Market exchange rate in July 1967 was 157 Dong to one U.S. dollar. A year later in June 1968, it was 180 Dong to a dollar. The entire system made for a lucrative black market in money. 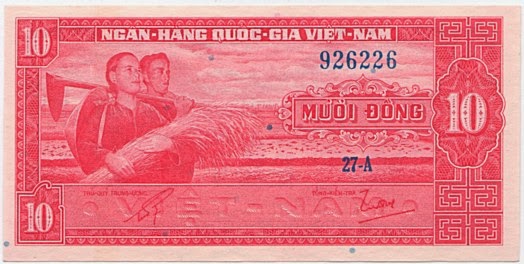 Vietnamese gladly accepted MPC because they would then use it later to purchase goods from the local PX. They couldn't buy anything there directly, but it was easy to make a straw purchase through a sympathetic G.I., and there were plenty of those around. "Third Nationals" had to be careful though about how much MPC they accumulated at any one time because every year or so, the military called in all of the current issue of MPC and exchanged those bills for a new issue. No advance notice was given of the one-day conversion, but Vietnamese citizens weren't allowed to do an official conversion anyway because they weren't supposed to have MPC. Most Vietnamese caught short holding the old issue would offer to pay a commission to a sympathetic G.I. to induce him to exchange their MPC for them. After conversion day, the old bills were only good for starting fires. However, any G.I. making a large exchange came to the attention of military authorities, which meant the CID (army's equivalent to the civilian FBI) would be looking into his affairs. 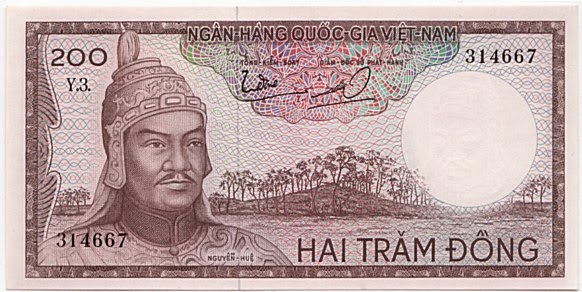 The locals also gladly took U.S. dollars in payment, if they could get it, because there was no sudden call-in on those bills, plus American dollars were more secure than their own Piasters/Dong. American currency in their hands often made its way up to the Vietnamese politicians and high brass who then deposited this money into personal Swiss or other foreign bank accounts. Other American bills made their way to the Viet Cong who used this currency to purchase medical and other supplies for their own war effort. Sometimes paying it to corrupt G.I.'s who diverted our military supplies.

This should give you a good idea how money itself could become a black market item, which then led to a clandestine market in money orders. Any G.I. making extra money through gambling in the barracks, becoming an entrepreneur in the underground market, or whatever illicit activity he schemed up, soon had a currency problem. Holding large amounts of MPC was no good because those bills only had value in-country. Back in the States, they were worthless. Piasters were a little shaky and not readily convertible out of the country without drawing undue attention, unless you were a legitimate business company. But, as long as a guy was careful, he could use MPC to purchase money orders at the military post office and mail them back home to the States. Trouble was, to stay out of the lime light, he had to find a lot of friends, acquaintances and/or willing G.I.'s, not also in the same trade, to make these purchases for him so his name didn't keep showing up. And, those straw-purchased money orders then had to be spread out to friends, relatives, acquaintances and/or willing G.I.'s on the receiving end to avoid suspicion from the same name always popping up as a receiver. Of course, if you could bribe the money order guy in the military post office that solved part of your problem.