Watching whole TV series on Netflix or Hulu Plus and mini-series on PBS or HBO continues to be a pleasure that feels a lot like reading an absorbing novel--or series of novels, one of the greatest joys for mystery lovers. There are a few shows that I'd heard about and was able to catch up on, so that I'm now reduced to watching the current episode like everybody else. It feels like having to read a novel one chapter at a time, being constantly interrupted.

In fact, I don't really watch the current episode "live," ie on first airing. When I try to watch TV on my iPad through my cable provider's app, there's always an annoying roar of static in the background. My theory, based on no technical knowledge whatsoever, is that the iPad signal and the TV show signal are both bouncing off the same satellite and jostling each other somehow. So I wait till the next day and catch the new episode on Hulu.

Why not watch on an actual TV? Well, we just got our first flat screen TV, and first it was football season, now it's the Olympics... Anyhow, I'm perfectly happy with the brilliant display on the iPad. Why Hulu for current episodes? Netflix goes in more for whole seasons. It's anybody's guess which of the two will go all the way back to Season 1 on a show I'm interested in seeing. If you don't use these services yet and are wondering, they don't offer everything, all the way back, all the time. On the other hand, you'll never run out of something to watch. 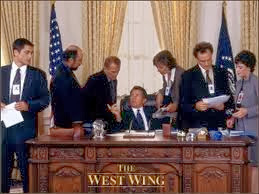 The West Wing: My all-time favorite, brilliantly conceived and written by Aaron Sorkin. I saw it on TV when it first appeared. At that time, a President with intelligence and integrity (and views resembling mine) in the White House was pure fiction, a pipe dream in which we got to indulge for an hour a week. Then we got one, and his administration turned out pretty much like West Wing's President Bartlet's: he couldn't do most of what he wanted to because an opposition Congress thwarted him at every turn. I had already watched the first 22 episodes again on VHS a couple of times when I got Netflix, but it was a joy to "read" the whole story again all the way through Bartlet's two terms and the following election. The show had brilliant ensemble playing by Martin Sheen, Allison Janney, Bradley Whitford, Richard Schiff, the late John Spencer, Rob Lowe, and Dulé Hill, most of whom got Emmys for their performances. A character-driven series with plenty of plot! The issues of national and global importance in 1999-2006 were strikingly in tune with those we face today. 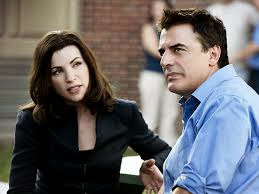 The Good Wife: A legal and political drama with Julianna Margulies as a Chicago attorney whose husband starts the series going to prison not for the scandal of consorting with a high priced call girl but because he's falsely accused of paying her with public funds; in the current Season 5, he's Governor Elect of Illinois. As they keep saying, it's Chicago--four of the last eight governors were indicted. The ensemble acting, again, is excellent, and the weekly legal problem combined with the ongoing drama of the main characters' relationships is right up my alley. 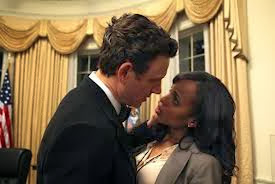 Scandal: This one combines the national politics of The West Wing with the legal (and extra-legal) drama of The Good Wife, with Kerry Washington as the head of a Washington DC crisis management firm who's having an affair--more than an affair: she's the love of his life, though of course he's married--with the President. Scandal's White House is far less detailed than West Wing's, but there's lots more skulduggery to make up for it. I was so riveted that I completely forgot the three other shows I was working my way through at the time. I got to binge on Seasons 1 and 2, and now I'm waiting impatiently week by week for the new episodes as they come out. 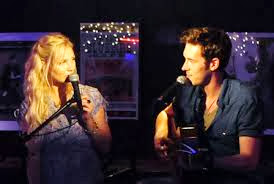 Nashville: I adore this show, which is available for binge watching, although so far I've managed to keep up, and I'll certainly watch all the episodes again. It doesn't have mystery or thriller elements, but it offers everything else I'm interested in: character and relationships, country music and the music business, and alcoholism and recovery. Many of the scenes take place at the Bluebird Café, a legendary venue for up-and-coming artists, where I spent a stellar evening at the end of the Killer Nashville mystery con a couple of years ago. One of the things Nashville gets right is the complexities of songwriting, and the songs themselves (three albums so far) are marvelous. 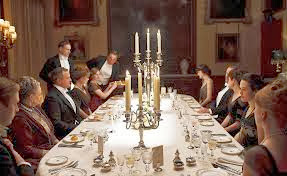 Downton Abbey: The absorbing upstairs/downstairs drama that starts with news of the sinking of the Titanic reaching an English stately home whose way of life World War I is about to change forever. I had to scroll with my eyes closed past long sections of spoilers on the DorothyL e-list to maintain the surprise in each fresh episode as I got to it. I caught up on Seasons 1 and 2 in binge mode and watched Season 3 as it came. Season 4 is in progress now.
Posted by Elizabeth Zelvin at 00:01