by R.T. Lawton
In The Art of Warfare, Sun Tzu says: "All warfare is based on deception." 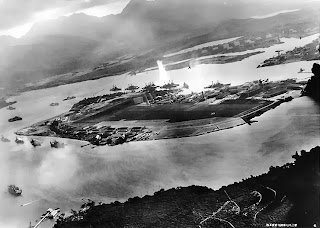 Tomorrow marks seventy-two years since the Japanese military forces pulled a sneak attack on America's navy at Pearl Harbor. At the time, the U.S. government didn't expect much to happen because the Japanese diplomats were still negotiating in Washington, D.C. to avoid war. We all know how well that turned out. Even though the Japanese had several previous incidents of engaging in military action in other countries without first declaring hostilities, the U.S. did not prepare itself against this same type of incident. Afterwards, president Franklin D. Roosevelt called it "a day to live in infamy." You'd think we'd not only remember that day, but would also learn a lesson from it.

Sun Tzu says: "Attack him when he is unprepared, appear where you are not expected."

Turn the clock forward in time twenty-seven years plus a couple of months from Pearl Harbor. At this point, the U.S. had already been at war in Viet Nam for three years. Our commanders and experts should be prepared for anything, but this is a guerilla war and we have a conventional army. We haven't used guerilla tactics since the American Revolution. Other than several Special Forces teams out in the bush, most commanders are still using strategies left over from Korea and WWII.

Happy New Year to you!!!


For centuries, the calendar used in Viet Nam has been the same as the Chinese one, a lunisolar based calendar. Their new year, called Tet Nguyen Dan, generally falls during late January or early February in our western calendar. Tet is the most important celebration of the year for the Vietnamese. Special foods are cooked and the house is cleaned in preparation for this three-day holiday. On the first day, lucky money in red envelopes is given to children and elders, ancestors are worshiped and there is much wishing of new Year's greetings to friends and family. It is a believed custom that the first person to set foot in the house on that morning determines good luck or bad for that house during the rest of the year. To that end, most families took care to invite whoever was to be the first person stepping into their house on that first day. Sometimes, to avoid any bad luck, the owner himself would leave the house just before midnight and return a few minutes after both clock hands had touched twelve.

It had also been a long standing custom in Viet Nam for both warring sides to call a truce during this holiday period. All of the Vietnamese, soldiers and civilians alike, if they could, went back to their family home to celebrate. The American troops weren't able to return to their homes in the U.S., but since the South Vietnamese and the North Vietnamese had both agreed to the upcoming cease fire, then the Americans could relax for a few days. After all, nothing had happened in-country during the last few Tet holiday truces. Wrong choice again.

The Viet Cong and North Vietnamese had long planned a guerrilla uprising in the south for the first morning of Tet. What better way to show the South Vietnamese their future than to have a Communist guerrilla fighter be the first one to step into their house on this special holiday. In the early morning of January 30, 1968, the Viet Cong and troops from the north attacked about one hundred major towns and cities, to include Saigon and the U.S. Embassy. To us, it was treachery in breaking the cease fire they had agreed to, but to them it was just good strategy set forth by an ancient Chinese warrior/philosopher.

American troops quickly rallied and defeated the guerrillas. Some places took a day, some took a month to bring back under control. The Communists lost an estimated 45,000 combatants killed in action. The Americans won the battles, but soon lost the war due to pressure from back on the home front.

So, could the Americans have  been better prepared?

"Those who cannot remember the past are condemned to repeat it." ~ George Santayana

In 1941, the Japanese already had a record of attacking countries without warning. The American intelligence agencies got caught sleeping on the job, or else they ignored the danger signs. They paid no attention to history. Thus the Pearl Harbor attack found us with no good defense in place.

Then, in early 1968, our military and intelligence agencies got caught short again. They failed to remember the lesson from Pearl Harbor. Perhaps if they'd delved into the history of Viet Nam, they'd have found the example left by the Trung Sisters and taken heed.

For centuries, Viet Nam (or parts of it) had fought for independence against various invaders: the Chinese (at least three times), the French (twice), the Japanese (during WWII), and the Americans and their allies, not to mention several ancient civilizations and kingdoms long gone to dust. During the first Chinese occupations centuries past, the Trung Sisters grew tired of their oppressors, raised an army of Vietnamese patriots and threw the Chinese out for a few years. What was the date of their uprising? Strangely enough, it was February 6th, right about Tet Nguyen Dan for that year.

There have long been shrines to the Trung Sisters and their rebellion, especially in the north and around Hanoi. It's not like their existence was a secret or something forgotten over the centuries. Evidently, we didn't pay attention to the history of the country we were in.

History is still out there teaching lessons, both to those who care to learn and with hard lessons to those who don't pay attention to her. Which leaves us with the question; do we have more surprises coming in the future, or are we paying attention yet?
Posted by R.T. Lawton at 00:01