Coming Clean About A Semi-Private Pleasure

Among my fellow SleuthSayers with their expertise about technology and weaponry, law enforcement and spying, I'd like to think I contribute my mite of unique individuality. So I'm going to take the conversation as far from explosives and cybersecurity and all that stuff my blog brothers in particular write about and make a confession. In our house, the stuffed animals talk to us. I could claim writer’s license—if our characters can talk to us, why shouldn’t the plush wolves and teddy bears? But my husband’s not a writer, and they talk to him too. 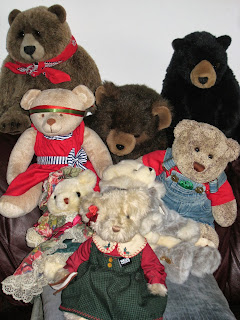 They tend to reveal their dark side to my husband. If you tell So no jokes about the wolves something (or someone) is venison, they’ll eat it in a heartbeat. In fact, my hubby, who can get pretty grumpy in the morning, especially before his second cup of coffee, that he channels his inner bear so effectively that our younger granddaughter is about 90 percent convinced that Grandpa is a bear. (She believes in the tooth fairy too.) With me, the animals are soothing. The bears especially understand my need for validation. They think I’m smarter than the average bear. They never think my first draft sucks. And they know the perfect cure for writer’s block: Put a salmon in it.

We know it's kind of weird. We used to try not to have these infantile, if not actually dysfunctional, relationships with the little guys. And gals—there’s Noelle the book bear, who’s quite the intellectual, and Elfie, who wears a red dress except at Xmas, when she puts her elf outfit on. But I digress. Like any other addicts, we couldn’t just say no to the animals’ demands for our attention and desire for conversation. So we said the hell with it and stopped trying to refrain. We decided that the way we channel these cuddly companions is a lot like the way fictional characters say and do what they want to, rather than what the author has planned. And there's nothing weird about that, is there? 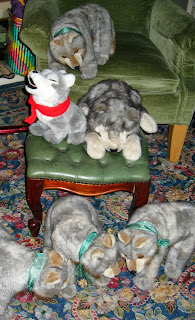 They’re good company, our bears and wolves and moose (who hail from Minnesota and Sweden as well as the usual zoo gift shops). Their conversation is a little limited: the wolves are always talking about venison, the bears about salmon and honey and berries. The moose go wild over green carpet or anything that resembles moss. But they’re fun, and they’re extremely plausible. I, for one, believe every word they say. 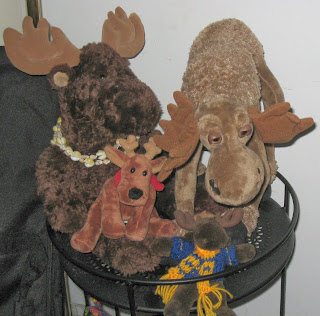 So here’s how the animals got me in trouble. It happened at Bouchercon in 2009, right after my second novel, Death Will Help You Leave Him, came out. Our rule is that my husband reads my fiction when, and only when, it's published, preferably as soon as it's released. When I left for Indianapolis, I left my husband at home in New York with strict instructions to read the book. Two nights later, my cell phone rang in my hotel room at the Hyatt. It was my hubby, and he was laughing so hard that it took me a while to understand what was cracking him up. He’d just read the passage where Bruce is talking about how he hasn’t accumulated a lot of possessions. “I’m not a moose,” Bruce says. “I don’t need moss.”


I finally made out what my husband was saying between roars of laughter.

“They don’t?” I said. “What do you mean? The moose are always talking about eating moss.”

What did he mean? It had nothing to do with him. I’d believed the moose. Who would know better what a moose eats?

“So where did the moose moss come from?”

Since I was at Bouchercon, I got to tell this story to a lot of writers. One of them suggested the perfect comeback if any reader points out I’ve committed an error of fact regarding what moose eat. It hasn't happened yet, but it still could.