[First, a shout-out to Janice Law, who has a terrific, twisted story in the March 2014 ALFRED HITCHCOCK, called "The Raider." Secondly, a very Merry Christmas to you all, and my best wishes for a great New Year.]

LAWRENCE OF ARABIA was released fifty years ago, and the recent death of Peter O'Toole prompts me to consider yet again, as a landmark in movie history.

LAWRENCE was a milestone for me personally, as well. I first saw it early in 1963, in its original roadshow release. Directed by David Lean, from a screenplay by Robert Bolt, shot in 70MM Panavision by Freddie Young, with a score by Maurice Jarre. It was astonishing. In fact, a transforming experience. Given the state of the art at the time, total immersion. I'd call it life-changing.

Early in the picture, there's a breath-taking cut. (And anybody who's seen the movie remembers it.) Lawrence, in close-up, blows out a match, and the screen opens suddenly wide to sunrise over the desert. It's a dramatic effect, but it does something else. It prefigures what's to come, and you somehow realize this, without knowing it. The movie shifts its shape, in that one piece of editing. The reason I'm making a big deal out of this cut, also, is that it made me realize, consciously, that movies don't happen by accident. I didn't think this in the theater, mind, but afterwards, as the idea began to percolate. It's worth pointing out, too, that in the course of that year, and the next two, I went back to see LAWRENCE some six or eight times, no exaggeration, and each time I saw something more. The picture deepened. It was breakthrough, for me to understand that David Lean (who began his career as an editor) was using the tools of movie-making to manipulate my response to what I was watching. Looking back, this seems naive, that it would take me so long to catch on, but it's instructive. More on this, below the fold.

My pal John Davis, a guy I'd met in boarding school, and who started college in New York with me in late '63, was a movie fanatic. He idolized Brando, and went on to be an actor, himself. That fall, we took every advantage of the New York revival houses, which were legion, in them days. LOOK BACK IN ANGER, THE 400 BLOWS, SEVEN SAMURAI. And the big-ticket new releases, TOM JONES and DR. STRANGELOVE. But of them all, John was utterly queer for LAWRENCE. He could quote the dialogue wholesale, the way O'Toole quoted Shakespeare. ("The best of them won't come for money. The best of them will come for me.") And he did a pretty fair Peter O'Toole, as well as a good Richard Burton. This says more than a little about our obsessions. Kurosawa, for example, or Truffaut. That was the year THE LEOPARD came out, too, and John could quote Burt Lancaster's lines---"Those that come after us will be jackals and dogs." Was it simple chance that we weren't head over heels for Hawks or Ford, yet, and our enthusiasms were the Brits and the Europeans? Arty, or kitchen sink, as opposed to Hollywood? I don't know. I'd like to think our horizons broadened.

David Lean, like Hitchcock, wasn't by any means art-house. They understood commercial necessities, box office, popular appeal. You're only as good as your last picture. Lean was very much involved in the revival of the British film industry after the war, with pictures like BRIEF ENCOUNTER, GREAT EXPECTATIONS, OLIVER TWIST. They did good business, but they also happen to be terrific movies. The he hit the jackpot, with BRIDGE ON THE RIVER KWAI, and he was able to write his own ticket. 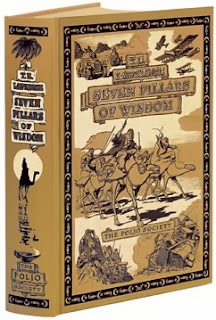 LAWRENCE wasn't the most obvious choice. An obscure campaign, and a hero who was something of a queer duck. "He saw the odd, and missed the even," Lawrence once remarked, although not of himself. It was intransigent material, and it wasn't an easy sell. Sam Spiegel wanted Brando to play the part, and Albert Finney was actually tested. O'Toole only came on board after they turned it down. There's a story (not on IMDb) that when O'Toole leaned over Spiegel's desk to shake hands on the deal, a half-pint of whiskey fell out of his breast pocket, which didn't inspire confidence. They spent something like a year and a half on the shoot, Jordan, Spain, Morocco. Spiegel must have been tearing his hair out, as production costs mounted, but he was already in too deep, and he kept the faith. CLEOPATRA, the next year, put Fox out of business.


Both the risk and the reward were enormous. It cost fifteen million bucks, in 1960's money. It grossed seventy million, eventually. It swept the Oscars. It made Peter O'Toole and Omar Sharif bankable stars. It gave David Lean the opportunity to make DOCTOR ZHIVAGO---which for all the sentimental attachment people have for "Lara's Theme," we might as well admit is a dull thud. LAWRENCE, though, in a sense, is sui generis. It made spectaculars buzzy. But everybody in the movie business missed the point. LAWRENCE was an intelligent spectacular. That's what made it work. It wasn't a sword-and-sandals epic, although there was plenty of sand. It was about something, and it was about something you could imagine having a stake in. Lawrence spits in the fire. "That, is not an argument," one of his Arab captains says. But the movie itself is. It argues that a man can change history. Lawrence, in life, may have well seen the odd, and missed the even. In legend, he becomes larger than life. 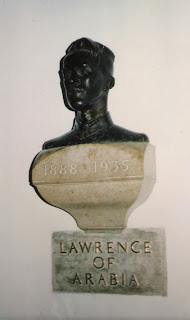 What's it say? We write stories. Lawrence wrote his own. SEVEN PILLARS is, perhaps, not entirely candid, and even while he left stuff out, he embroidered other things. Why spoil a good story for lack of the facts? More to the point, as writers, we're often jackdaws, and feather our nests with shiny borrowings. The lasting lesson of LAWRENCE, for me---the movie, and in some part the man---is that we shape a narrative to suit our purpose. The match, the desert landscape opening before us. "Nothing is written," Lawrence says, meaning nothing is Fated. But in a fiction, of course, everything is. It all answers to a resolution. Grief is purged, innocence is redeemed, the natural order is restored. Well, maybe. We impose, in other words, a moral, and leave ambiguity to life itself.