Welcome to the Friday after Christmas. 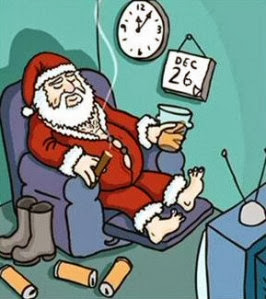 Based on an old joke I repeatedly heard while stationed in the south, I’m always tempted to call this time period the Annual Taint. As in: “I-tain’t Christmas, an’ i-tain’t New Years yet. It jes tain’t!”

That old joke had nothing to do with time-keeping or calendars, of course. And, it was actually quite vulgar, so I won’t reproduce it here. I mention it merely to explain how I came up with the idea of calling this period between Christmas and New Year’s Day, the Annual Taint.

The kids aren’t in school. A lot of people haven’t yet returned to the office. Not a lot of business seems to get done, and those who are working tend to be a bit more lackadaisical in the approach they take to their jobs, it seems to me (though they may FEEL quite harried due to the mad influx of post-Christmas shoppers and merchandise-returners).

All those packages that didn’t make it to their destinations by Christmas, move sluggishly through a still-bloated postal system slowly digesting the flotsam of Christmas-most-recently-past, prodded along by folks who’d really rather be sitting at home with their feet up instead. Seems i-tain’t a good time to expect quick shipping.

The mind is often sluggish, as well, at this time of year. Too much food on Christmas day, topped by sugary treats that seem to lie everywhere about the house, in break rooms, local watering holes and in gathering spots, seemingly leech the mind’s energy.

In fact, I just went down to fetch some cigars (desperately needing nicotine to help produce my digi-print ramblings!) and found myself driving through streets and past shopping centers that appeared to be staffed and frequented by still-breathing zombies. One fellow made a left against a red arrow—illegal here in Scottsdale. I inadvertently caught up to him at the next traffic light, and saw that he and his wife were evidently trying to figure out how to light a cigarette. Considering that he’d just run a red light, I wondered if it really was a cigarette!

In the ancient days of sailing ships, there was a spot in the mid-Atlantic known as the Doldrums. There, the trade winds died and a ship might sit for days or weeks before a breeze came along to set her in motion again. Sometimes the long boats were lowered and crewmembers took turns, trying to row their ship back into the wind once more. But, try as they might, they were usually forced to let the great Atlantic catch its breath before blowing them onward in their journey.

The Annual Taint is sort of like American Production’s doldrums. People tend to sit around and stare, while nothing much happens. For those of us in the writing business, it seems folly to expect an editor's or agent's response during this time of year.

Nor does it matter if you belong to a religion that doesn't celebrate Christmas, or even if you practice or believe in no religion at all; you’re still caught up in the Taint, along with the rest of us—it’s the nature of the season.

Frankly, I used to feel sorry for confirmed atheists with Type-A personalities, thinking they must go rather mad this time of year.  Lately however, I’ve realized they probably make enough money—having Type-A personalities, that is—that they long ago realized this is the best occasion to vacation in the Bahamas, or maybe to take pictures of the Kremlin with a snow-covered Red Square in the foreground.

Yes, even the most productive-minded among us find it necessary to catch their breath during the Annual Taint. There’s just no choice. It seems to be a requirement imposed on us by a collective hitch in our national behavior.

On the other hand, ‘tain’t a bad time t’ catch up on your readin’ neither. So … I encourage you to sit back and Enjoy the Annual Taint—whoever you are, and whatever your philosophical or religious leanings may be. Sit back, put your feet up, open a good book, and maybe take a sip or more of whatever you enjoy.