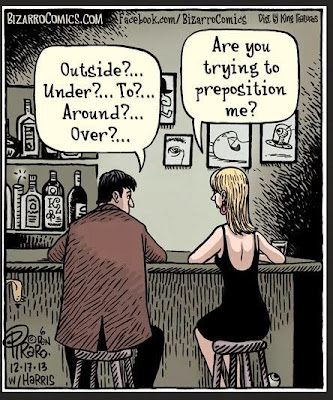 I'm certain someone taught you all about prepositions long ago, but this cartoon caught my eye, and I decided that would be my topic today.  Rather than make this seem like a lesson, I've written an exercise to see how much you remember from those old school days. Please decide on your answers before going to the bottom to check them.

1.  What's the difference between a preposition and a proposition?

2.  Who recorded "The Preposition Song"?  Why is it called that?

3.  Who is credited with coining the rule that writers shouldn't end sentences with prepositions?

4.  What word should "of" never replace?

5.  What preposition should be used with the word "different"?

6.  Who responded to an editor's demand that a sentence be        reworded because it ended with a preposition with this statement:
"This is the sort of English up with which I cannot put"?

2.  Tanya Tucker recorded "Hanging In."  The hook for the chorus is "Hanging in, hanging out, hanging on."

3. John Dryden, a seventeenth century poet, is credited with the rule against ending a sentence with a preposition.  Throughout history, writers have sometimes broken this rule.  Sometimes the preposition at the end of a sentence is needed while at other times, it is unnecessary and incorrect.

5.  Grammatically correct according to text books is the phrase "different from," but that's a frequent error made by many speakers and writers who use "different than."

6.  That sentence is attributed to Sir Winston Churchill.

BONUS QUESTION 1
What's wrong with the answer to question two?


BONUS QUESTION 1 ANSWER
In the answer to question 2, the "in," "out," and "on" aren't used as prepositions.  They're are all used as adverbs modifying "hanging."

BONUS QUESTION 2 ANSWER
Many people say or write (A) between you and I.  For some reason, they think "I" sounds "more proper."  (A) is incorrect.

Even more people, who don't care if they're proper or not, use (C) between me and you.  (C) is incorrect because grammatically "you" is named before the speaker.

A personal question from me to you... I hope I haven't insulted anyone with these questions.  I'm sure all of our readers and writers made a perfect score. Now I have a question that I'd really like every one of you to answer through comments.

DO YOU STAND IN LINE OR ON LINE?

In the South, we stand in line to wait for something.  We tell children, "Please get in line," but many non-southerners say, "I had to stand on line to get the tickets."

What do you say and can anyone find a definitive answer whether in line is correct or on line?

Funny, Fran, and educational. Reminds me of an early column about prepositions in Criminal Brief.

As where to place a preposition, James Warren said to look at the word itself: pre-position.

I would argue ‘in line’ is correct, because you’re placing a person within a queue of people (unless there’s a line painted on the floor). To me, ‘on-line’ relates to computer networking.

Fran, this was a lot of fun--I love posts about language. And I prefer standing IN line, not on line.

Fran, I enjoyed the cartoons too. I always stand in line. I’ve never heard anyone say they stand on line.

Also, I used to have suspects "toe" the line (a line painted on the floor) for mug shots so they were correctly framed--framed in the photo, of course, not the charges.

David, that southernism is still in use. I'm fixin' to go get some lunch.

Nobody ever prepositions me!

I stand IN line, and howl at cartoons, and I know that you should never end a sentence with a preposition unless of course you've been propositioned, at which point it's Katy bar the door!

Fran, I have always stood IN line, unless:

(a)There was a line painted on the floor, or a joint in the sidewalk we were all supposed to toe, when I was in the army.

(b) I was ordered to help form a rough skirmish line, by the command: "ON-LINE!" also while in the army. (Though this command is not heard all that often, except when policing up trash, these days. LOL)

I have noticed that British folks seem to say they stand ON line. And, I've run into a few Americans who said it, too, but don't know where they hailed from.

I have no idea if this suggestion holds water, or where I heard that explanation.

I stand in line
I say "between you and me" (and sometimes the fence post).
I occasionally end a sentence with a preposition. (Love Churchill"s response).

Eether, either, neether, neither. Let's call the whole thing off.

Thanks for each of your comments. I'd thought "in" line might be southern, but apparently "on" line may have been British before it became an Internet term.
I learned something from your comments. For one thing, I've heard "toe the line" all my life, but I thought it was "tow the line," kind of like, "tote that line, lift that bail, get a little drunk, and you'll land in jail."
Glad you enjoyed the cartoons. I love humor, though sometimes what strikes me as funny is not always funny to others.
MERRY CHRISTMAS to my fellow Christians!

I lately lost a preposition.
It hid, I think, beneath my chair.
And angrily I cried, "Perdition!
Up from out of in under there!"

Now, correctness is my vade mecum,
and straggling phrases I abhor.
And yet I wonder, what should he come
up from out of in under for?

(Couldn't resist. I love that poem! Although I don't know who wrote it. Oh, and the 'in line'
'on line' issue is merely a matter of dialect. Brits also say 'it's down to you' where Americans say 'it's up to you.' Many such examples of prepositional
variation.)