Dream a Little Theme of Me

First, I owe an apology to Dale, and to anyone who commented on the blog early on Tuesday.  Here's what happened.

I polished thIs piece over the weekend and scheduled it - I thought - for November 20.  I checked it Monday evening and it had disappeared.  Imagine my joy.  I quickly found that I had somehow "scheduled" it for October 20, so it was up, but hidden by weeks of newer blogs.  So I changed the date to November 20.  What I didn't realize was that doing that somehow convinced Blogger to put it up at the top of our blog, even though it clearly said it was not scheduled until the next day.

When I found out this happened I copied it to a new file - this one - and deleted the old one.  Unfortunately that erases any comments people might have left.

So again, my apologies.  And if you didn't read Dale's column, you will find it below mine (on purpose this time.)

Bob Daniher  is a mystery fan and budding mystery writer who lives a stone's throw (almost literally) from my sister in New Jersey.  We have chatted about things criminous from time to time and he recently asked me what I thought of literary theme.

Well, it's a good question, was my first reaction.  Because I feel about theme like  Justice Potter Stewart said about obscenity: "I know it when I see it."

Fumbling around, I suggested that theme is what the story is about other  than the plot.  My wife said "It's the structure the plot hangs on."  Or you could say it is the world view the story is decribing.  Or what the reader is supposed to feel.

Novelist John Gardner wrote: "By theme here we mean not a message -- a word no good writer likes applied to his work -- but the general subject, as the theme of an evening of debates may be World Wide Inflation."

I decided to look at the five stories of mine that have been published this year and see if I can spot any themes.  I start with the Least Visibible Theme and move down to the Theme Heaviest of the tales.  Don't worry, I won't give away the endings.

"Shanks' Ride"
The Plot: A tipsy mystery writer, heading home from a bar, solves the puzzle that has bugged a taxi driver for a decade.
Theme:  Damned if I know, unless it is what JIm Thompson called the only plot:   "Things are not what they seem."

"The Red Envelope."
The Plot: In 1958 Greenwich Village a Beat poet solves the murder of an artist.
Theme: Maybe something like: the danger of misunderstanding.  One character's entire life is changed because someone misunderstands an acronym.  My narrator, new to New York misinterprets many things, including the pronunciation of Greenwich Village.  The murderer is caught because the detective does not misinterpret  the signficiance of the titular envelope. But i admit I am reaching here.

The Plot: A man breaks into a wirter's office and, at gun point, tells him a story about three friends who became enemies.
Theme:  This time I am on solid ground.  I even went back during the edited process and looked for ways to make the theme stand out.  See the first line:  "Here's the story," said the man whose name was probably not Richard.  "Once upon a time there were three men who hated each other."  This is a story about the power of storytelling.

"Crow's Lesson."
The Plot: A private detective blunders onto a parental kidnapping and has to keep the culprit from killing him.
Theme:  At the end of the story Marty Crow tells his client "I learned my lesson" and proceeds to tell him what it is.  This may seem like the message John Gardner warns against, but I prefer to think iof it as the theme.

"The Present."
The Plot: A woman goes to the mall to find a birthday gift for her son, and believes she sees a kidnapped child.
Theme:I went theme-crazy on this one.  the theme relates to  the protagonist's problems with time (no, this is not science fiction), and  a dozen details are supposed to tickle the reader's subconcious mind on that point.  (All the characters' names relate to time, as does the title of the story, and the birthday present itself is a telescope, suitable for looking millions of years into the past.) 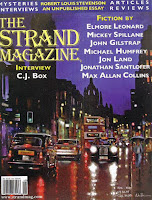 But here's the thing about that last story that makes me wonder: the theme serves the plot more than the plot serves the theme.  You see, the story has a twist ending, and all the references to time are foreshadowing.  It is as if I am setting up little pictures in your peripheral vision, preparing some part of your brain so that when the twist comes you will say, of course, not what the hell?

So does that mean those references are not illustrations of a theme, but merely a plot device?  Have an answer on my desk in triplicate by tomorrow morning.  And in the mean time, tell me what you think of literary theme?  Does it belong in mystery fiction?  Or is it always there whether intended or not?

Posted by Robert Lopresti at 00:06