Given their daring and dash, maybe it's presumptuous to suggest that the guy who should be given top billing is the astonishing Patrick Leigh Fermor. He may be best known for his WWII adventures with the Special Operations Executive, a Brit spook outfit: he worked with the resistance in Crete for two years, during the German occupation.

Late in 1933, when he was eighteen, he set out on a tramp across Europe, on foot, with a backpack, starting in Holland, and ending up in Constantinople, a year or so later. He kept detailed 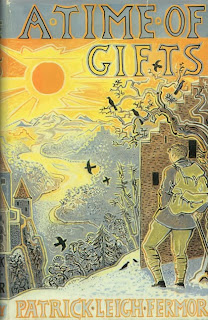 journals, but he didn't actually write about it, or publish, at least, until he was well into his sixties. The first book---of three---A TIME OF GIFTS, came out in '77, BETWEEN THE WOODS AND THE WATER appeared in '86, and THE BROKEN ROAD wasn't published until just this year (Paddy Fermor died in 2011, at ninety-six).

The really interesting thing is that although the books were written in recollection, there's no hindsight, no foreshadowing, no historical irony. Fascism was on the rise in '33. Hitler had come to power in Germany, Mussolini in Italy, there was the Iron Guard in Romania, and Fermor takes vivid note of all this, but he maintains his relative innocence. The point of view is not the older man looking back, but the younger man seeking 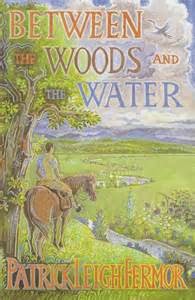 adventure. He doesn't entirely ignore the events of the years between, but the present intrudes very little. We get Hapsburgs, milkmaids, Gypsies, ostlers and monks, stables, cloisters, minarets, black bread and cheese, with straw for a bed, venison and wine and damask sheets. The sense of an old order fading, at times, or the past manifest and alive, an inhabited reality, in stones, in language and landscape, in gesture, or costume, or habit of mind. Fermor is, above everything else, evocative. Smells, shapes, or sounds. He doesn't simply notice, he inhales. 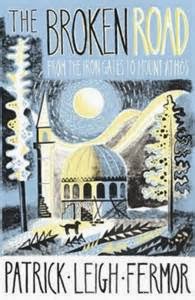 The best of this generation of writers, Paddy Fermor, or Peter Fleming, convey a sense of
wonder, not weariness. We know the worlds they describe are lost to us, the Balkan monarchies, the salt-harvesters of the Iraqi marshes, the nomadic herdsmen of the steppe, as far removed from our own experience as they themselves were from the Crusades. On the other hand, they give us context and continuity. They may be closer to the Crusades than we are to them---an enormous gap opens in history, in the second half of the 20th century, the mechanics of war and tyranny, mass murder, the atom bomb. Reading somebody like Fermor isn't just a bridge to the past, it's a journey of discovery, to a time, we might say, when our hearts were still open and glad.
Posted by David Edgerley Gates at 00:30

David, you surprise me so often, I'm almost beginning to expect it. LOL

I have to admit: I've never read travel logs or journals, because I figured they'd be boring. Now, you've made me reconsider, you b#*!&%$! LOL

And I thank you for that. I'll have to check out some of Fermor's books.

Don't forget Laurie Lee, who tramped across Spain in the late 1930s in "As I walked out one midsummer morning."

Eve, another good one. And I left out Eric Newby, A SHORT WALK IN THE HINDU KUSH. One of the newer people to explore (no pun intended) is Redmond O'Hanlon, who's kind of a wise guy, and always entertaining, and we shouldn't forget Bruce Chatwin, either.

Dix, it's not just the exotic places, but the way they look at them. Sometimes they carry the baggage of Empire along with them, but usually they see stuff with a fresh eye. Byron's ROAD TO OXIANA is a classic of the genre.

David- so pleased to see someone making a point of mentioning the terrific Patrick Leigh Fermor. Have you read "The Cretan Runner"? He is credited with translating it, but I find his linguistic fingerprints are legion running through it.

Another couple of books I think worth mentioning in this thread are Neal Ascherson's terrific BLACK SEA, and Peter Hopkirk's epic THE GREAT GAME (which is equal parts history, politics, and travel writing- the traveling being done by British and Russian Imperial agents vying for leverage (and imperial expansion) in 19th century Central and South Asia. RIVETING stuff!

Thanks again for reminding us about Bold Paddy!

Wonderful! And remember Richard Haliburton? I was nuts about his books in high school!