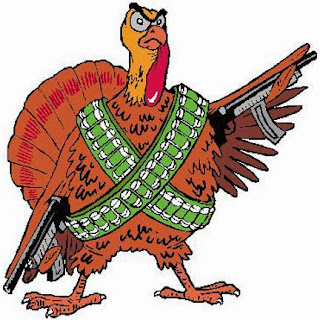 On the 16th of November, Elizabeth Zelvin posted an article here, concerning the literary longevity of contemporary writers. Her post inferred the question:


Will any contemporary authors be remembered one hundred years from now?

In the comments section of that post, Eve Fisher mentioned the possibility of a natural or man-made disaster disrupting the national power grid between now and that future time, making the printed word a precious commodity once more.

Eve’s comment interested me because, as a Special Forces Engineer Sergeant, part of my training included an in-depth examination of Target Analysis.

On this post-Thanksgiving day, when we’re all probably still sleepy from the aftermath, I’m not going to explain details about Target Complexes, Target Components, or the decision matrices used to determine which Target Components to destroy in order to disrupt a Target Complex for a desired time period.  (Besides:  It's one thing to post very basic general explosives information, and quite another to explain how and where to plant explosives in order to disrupt national supply networks.)

Instead, I’d like to present a sort of game, proposing a theoretical scenario and asking you to answer a question.

Reading the post, and the comments by Elizabeth and Eve, I began to consider:  What would happen if I were given the choice of which authors might be read 100 years from now?  Which authors would I choose?  And, if I knew books were about to become a rare commodity, which books would I try to preserve for humanity?

An advanced alien race intercepted one of our Voyager probes and interpreted it in a hostile manner. Now, they are afraid that violent humans might soon begin exploring space.

After long deliberation, they made a weighty decision. They recently took over all airwaves on our planet, to broadcast a very apologetic message, in which they explained their intentions to bombard Earth with atomic turkey legs, in an attempt to set us back to a time of medieval technological capabilities.

They did, however, wreak havoc through Electro-Magnetic Pulse (EMP) generation, knocking out the world’s electrical systems and turning most contemporary automobiles into little more than oversized paper weights.


Because you are such a kind person, however, you have recently come into custody of a running vehicle.

You were lucky enough to flee built-up areas of civilization, before the attack commenced, and wound up in a rural zone where you met an old man trying to get to his dying wife’s bedside.

He owned a well-maintained 1974 Ford Pinto hatchback, but couldn’t see well enough to drive. Because you were kind enough to drive him to his wife’s care home, he gave you the car—which is old enough that the EMP didn’t effect it. He also gave you a map and key to a blast/fallout shelter, stocked with years of food and other supplies, which he owns a few miles away.

While you’re driving to the shelter, an alien ship flies overhead, large loudspeakers blaring: “People of Earth, we remind you that we really feel bad about this. But, we’re doing it because we think you wouldn’t feel bad about doing this to us, so we’re trying to protect ourselves. In the interests of killing as few of you as possible—now that most of you are dead—we’d like to let you know that we will shortly begin Phase II of our plan.

"In thirty minutes, we will target the remaining centers of knowledge or industry on your planet with laser weapons that will destroy anything within a 100-yard radius. These secondary targets include all still-existing factories, refineries, libraries and research facilities.

"Please remember: There’s nothing personal in this attack. We just want to bomb you back to a technological base which will keep us safe for a bit longer. Thank you! And have a nice day.”

As the announcement concludes, you drive over the top of a rise and see that a tiny town on your route has incongruously built a large 4-story library. An alien ship hovers nearby, waiting to destroy the library in thirty minutes.

The shelter you’re driving toward is about five minutes beyond this town. Brave soul that you are, however, you floor it and drive straight to the library to begin loading books into your car, intent on preserving some of humanity’s hard-won knowledge. 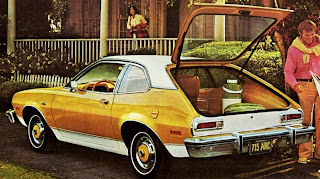 You have just under 30 minutes to gather books within a large library, and store them in a ’74 Pinto. The pic on the right should give you some idea how much room you have inside the hatchback.

Though the power is out, preventing you from using the computer to locate any books, you’re excited to discover that this particular library has maintained their card catalogue for some reason. Thus, there is a way to find the call number of non-fiction books.

Which books would you take?

Maybe you’d take particular types of books. Or, perhaps there is a book that you feel has greater importance than any other, so maybe you’d grab that one, then try to find others.

You’re losing time, if you stand there thinking. You’ve got to act quickly. So, what do you do?

Your answer(s) and how you approach your decision is up to you, and you alone. But please let us know, in the comments section, what you would do.

You’ll find my answer in the comments section, too.