Back on October 8, 2013, Dale shared some British phrases, what they mean to the English, and the very different way that listeners sometimes interpret them.  More recently, Dixon wrote about speaking in languages other than American-English.

Dale and Dixon set me to thinking about differences in meaning and understanding of expressions right here in the USA.

SleuthSayer readers and writers are spread far and wide.  I was born fewer than thirty miles from where I live now in South Carolina, and today I want to have a few words with you about the language of Southernese.

Anyone who's ever attended a little country church in the South knows that regional preachers often introduce their sermons with an anecdote or joke.  Don't get worried.  I don't preach, but I do want to share a quick story about Southernese with you.

Two elderly southern ladies are sitting on the front porch rocking.  The first one looks at the second one and says, "See this beautiful silk dress I'm wearing.  My husband bought it for me to show how much he loves me." 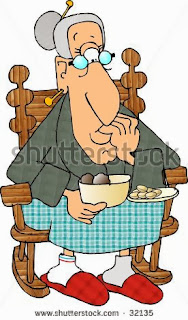 First lady holds up her hand in front of the other lady's face and says, "See this gorgeous diamond ring. My husband bought it for me to show how much he loves me."

First lady points to her shoes.  "See these expensive shoes I'm wearing.  My husband bought them for me to show how much he loves me."

First lady says, "And what did your husband do for you to show how much he loves you?"

Second lady says, "He sent me to a fancy finishing school in Virginia so they could teach me to be a southern lady."

First lady says, "And what did you learn?"

Right in line with "That's nice" is "Bless your heart," which some people think is a sweet statement that southerners say all the time. They don't understand that it actually has nothing to do with religion or blessings or being sweet.  It's a passive-aggressive way of calling the other person an idiot and frequently follows a negative comment.

Cotton was a key crop in the South for many years.  The most successful harvest came from tall bushes loaded with fluffy white balls because the taller the bush, the greater the returns and the easier it is to pick.  "Living in high cotton" indicates a person is doing well--successful and wealthy.

Rode Hard and Put Up Wet

"That gal looks like she's been rode hard and put up wet."
Don't think this is a sexual innuendo; it's not.  It means a person looks like they may have had too much to drink or stayed up too long the night before.  It's based on horse grooming. If a horse runs fast, it works up a sweat, especially under the saddle. After running, a horse should be walked around to dry off before going back to the stable.  If this isn't done, the horse will look sick, tired, and worn out, which is rode hard and put up wet.

Madder Than a Wet Hen

Someone who looks madder than a wet hen is being compared to a female chicken who gets irritated at the farmer when eggs are gathered because she wants to sit on them and hatch biddies.  This is called "broodiness," and the cure is to dunk the hen in cold water.  Does a hormonal hen who has had a cold water bath sound like anyone you know?

Happy as a Dead Pig in the Sunshine

I confess that this one isn't as popular as the other examples, but it brings up thoughts of Patricia Cornwell's The Body Farm. I need to connect this column to mystery and/or writing, so I'll share it. Pigs that die outside in the sty, become dried out by the sun. The skin pulls back around the lips giving the dead pig a grin. Hence, a dead pig in the sunshine looks happy.

"That's about as useful as boobs on a bull."

If I have to explain that one, there's no hope for you to learn to speak Southernese.

Two of my Southern mother's favorites: "I've heard bulls fart before" (i.e., a blowhard); "Crazy as a peach-orchard boar" (hogs that get to snuffle through peach orchards generally get drunk on the old peaches and run amok).

Thanks, Eve. I wasn't familiar with either of these and I love old expressions and how they originated.

Fran, I've also heard the last one as "Useless as teats on a bore hog."

When I was stationed at Ft. Bragg in North Carolina, I became acquainted with the term: "That's just a sign." I never quite understood the significance of this, however, it seems the speaker is trying to indicate that the sign in question ("No Parking", "Do Not Enter", "No Trespassing", etc.) has been posted, but no one is present to enforce what the sign says. Ergo, the sign can be ignored. Maybe I'm misunderstanding and you can clarify this for me, if you're familiar with the saying.

Hey, all of those make perfect sense to me.

Pretty soon Fran and I will have all y'all (notice I didn't say all you guys) talking the right way.

Dixon, I've heard the bull one that way too. Unless someone else knows different, I think like you. "Just a sign" means it can't stop you or give you a ticket if no one is looking.

John, I didn't expect you to have trouble with any of these. I had a friend from Mississippi who used to say, "Reckon the rain will hurt the rhubarb?" Do you have any ideas about that one?

Fran, the first meal my East Texas step-mama fed me was shrimp etouffee on steamed white rice. I thought I was doing pretty good eating with a spoon until she asked, "R.T., would you like a shovel?" Thought I'd made a real faux pas with my manners until she explained a "shovel" is a cracker or piece of bread to help place food on the spoon.
When it came to make-up, she'd say, "Well let me put on my face and we'll go."

R.T., you just solved my problem deciding what to cook for dinner, and you're right, in the South, we have to have a shovel when we eat it.
My closest female friend calls me every morning and when she finishes talking, she says, "Let me go now. I have to put on my face and shoes before I go out."

Our regional take on the last one was 'useless as tits on a boar hog.'

My grandfather used 'meaner than cat piss,' meaning nasty, which anyone who's ever had a cat will understand.

Old-times would sometimes mention 'the cow that got in the onion patch,' a variation on 'You are what you eat' and implying a bad odor, but also meaning someone who'd be useless for a day or two. Strong tasting herbs and aromatics like leeks, onions, and garlic taint the milk.

Wow! I'd only heard a few of these! Thanks!

How about "nervous as a long-tailed cat in a room full of rocking chairs?" Or "slippery as chicken guts on a doorknob..."

Thanks to Leigh, Jeff, and Flip for your comments. I'd heard the one about the rocking chairs, but not the cat piss or cow.

Or "my hair looks like a nest of grand-daddy long legs", i.e., a mess.