Doyle When He Nodded

First I'd like to echo Brian Thornton by thanking the other contributors to SleuthSayers for their warm welcome. I'd especially like to thank Robert Lopresti for inviting me to give this a try and Dale Andrews, who's alternating with me on Tuesdays, for the generous plug he gave me in his most recent post.

For my first post, I thought I'd write about one of my mystery writing heroes, Sir Arthur Conan Doyle, and about one of his most interesting characteristics (from a writer's point of view): his carelessness. 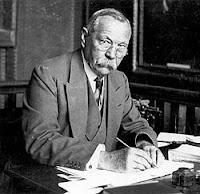 Even casual readers of Doyle's immortal Sherlock Holmes stories have probably noted one egregious example of this carelessness, namely Watson's mobile bullet wound, which unaccountably shifts from his shoulder to his leg. Well, you might be thinking, in a long series of stories (there are fifty-six Holmes short stories and four longer ones), a writer is apt to get a detail of a character's backstory wrong. But Watson's wound made its famous migration sometime between the first tale, A Study in Scarlet, and the second, The Sign of Four. Not a good omen for the future, though a telling one.

I'll cite just a couple more examples I've come across recently. In "The Copper Beeches," a young governess arrives at 221B for a morning meeting, stays about twenty minutes, and bids Holmes and Watson "good-night" as she leaves. In "The Man with the Twisted Lip," Watson's wife refers to him as James, though his given name was John. Speaking of the doctor's wife, the reports of her death seem to have been greatly exaggerated, as she returns from the grave from time to time. Or was there a second Mrs. Watson? Or half a dozen?

Dorothy L. Sayers, another of my favorites, once wrote a scholarly essay that attempted to straighten out the date problems in "The Red-Headed League." She focused on four issues, one of which might be called "The Mystery of the Missing Summer." The story is set in October of 1890 but a character refers to an April newspaper article as having appeared "just two months ago." What, as current scholars might phrase the question, is up with that?

I find two features of Doyle's carelessness particularly intriguing. The first is its endurance. Okay, so Doyle wrote quickly and didn't get much help from his editors at the Strand Magazine. But who was minding the store when the stories were collected in book form? Buy any new edition of The Adventures of Sherlock Holmes today and in "The Man with the Twisted Lip," Watson's wife will still get his first name wrong. October 9, 1890 will still be called a Saturday in "The Red-Headed League" when it was in fact a Thursday. It's as though Doyle carved his first drafts in stone.

Even late in his long life, by which time Sir Arthur must have known that the tossed-off Holmes tales were going to outlive his more serious literary efforts, he didn't clean up after himself, though by then he must have received hundreds of letters from helpful or confused readers. By then, too, pioneering Sherlockian scholars had published essays on all aspects of the Holmes tales, including the puzzling problems.

Doyle might have recognized in this correspondence and in the critical literature an unlooked-for benefit from his mistakes. I find this benefit to be the second intriguing characteristic of Doyle's carelessness: its appeal. Far from turning readers off, it draws them in. It makes the Sherlock Holmes stories a particularly interactive form of fiction.

All fair play mysteries are interactive to the extent that readers are invited to solve the crime along with the detective, but the Sherlock Holmes stories take interaction to a whole new level. Like Dorothy Sayers, generations of writers, who presumably had better things to do (like dogs to walk and lawns to mow), have taken up their pens to try to reconcile or explain away Watson's two wives and the "long interview" in "The Copper Beeches" and so on. (One of Sayers' explanations for the date problems in "the Red-Headed League" was transcription errors caused by Watson's poor handwriting, perhaps the earliest argument against cursive.)

In the process, the Sherlockians scholars have created hours of enjoyment for readers who love the stories and maybe even helped the stories live on. It's enough to make an author cast a jaundiced eye on writing-manual advice of the "revise endlessly" variety. A little carelessness might actually be good for the soul of a work. To paraphrase Holmes himself, once you have eliminated actual spelling errors, whatever remains, however improbable, might be better left alone.
Posted by Terence Faherty at 00:01