The IDES Are Coming 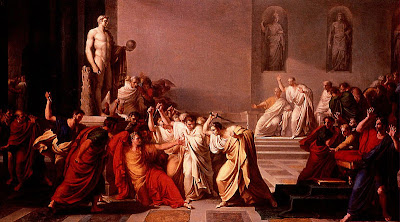 There are those out there who are superstitious about the number 13 and those who consider the Ides of March to be an unlucky day. However, for an up and coming guy like Julius Caesar who scoffed at seers, soothsayers, fortune tellers and their like, it didn't make any difference to him if the ides fell on a 13th or a 15th. But, in hindsight, he couldn't say he hadn't been warned. TWICE.

In 49 BC, as Julius crossed that shallow river known as the Rubicon in northeastern Italy, an Etruscan haruspex (one who read sheep entrails for a living) by the name of Titus Spurinna, warned old Jules about the Ides of March. That was five years in advance of Julius' demise. Got no idea what high school guidance counselor recommended that up-to-your-elbows messy career to the Etruscan, but as it turned out, Titus sure found his calling when he predicted that one right. That was warning # 1.

Then later, in 44 BC as Julius went his merry way toward the Theater of Pompey, a site frequently used by the Roman Senate for meetings, he ran into a second seer who had also put out a warning. Caesar joked with this guy that the Ides of March had come and yet he was still here. Prophetically, the seer responded that yep the Ides had come, but they'd not yet gone. And we all know how that turned out.

So, maybe we should take a look at the Ides of March. Maybe it does have an unlucky omen to that day. Let's see if past history gives us a pattern of death, destruction and despair.

44 BC   A good place to start. Julius Caesar got shanked 23 times by 60 conspirators. The crowd of eager participants must've really been thick around Jules because it appears that 37 of them didn't get a chance to dip their daggers.

280 AD  Sun Hao of the Eastern Wu had to surrender to his enemies after losing all his battles. That was good for the upcoming Jin Dynasty, but not so good for Hao. Guess whether you believe that was a lucky or unlucky day depends upon which side you were on.

351 AD  Constantius II elevates his cousin Gallus to Caesar of the Eastern part of the Roman Empire. Bad decision. Gallus subsequently plots to get rid of his benefactor. Not to make you paranoid, but it seems that no good deed goes unpunished.

933 AD  King Henry of Germany decides to break his truce with the Magyars, so he sends them a dead dog. If the Hungarians had employed the services of a good haruspex to read the dog's entrails, perhaps they'd have realized they were about to receive the pointy end of the sword.

1493 AD  Chris Columbus returns to Spain after his first trip to the Americas. He's all a blubber about the land he found. Look out Native Americans, a new real estate agent is coming to town.

1564 AD  Akbar the Great of India abolishes the per capita tax. The result was corruption and disgruntled revenue officers.Nice try Akbar, but the subject of taxes keeps coming up. More later.

1781 AD  General Cornwallis with 1,900 British troops defeats an American force of of 4,000 soldiers near present day Greensboro, South Carolina. Whatever happened to safety in numbers? Las Vegas odds makers would have lost their buckskin shirts on that one.

1888 AD  Start of the Anglo-Tibetan War. The Brits were trying to keep the sun from setting on their far flung empire, while the Tibets were angling to keep their tax revenue to themselves. There we go with tax money again. Anyway, it was another war and those events almost always turn out badly for one side or both.

1916 AD  President Wilson sends 4,800 troops under the command of General Black Jack Pershing over the Mexican Border to chase Pancho Villa. Jack never caught Pancho, but used the military experience in Mexico as prep for Wold War One. Pancho did not come out so good in the end. He got assassinated by his fellow countrymen and his skull was later stolen from his grave.

1917 AD  Tsar Nicholas II, ruler of all the Russias, abdicates his throne. If he thought he had his back against the wall at that point, he was a little premature on the schedule, but the Bolsheviks got around to taking care of that.

1931 AD  The S.S. Viking is off the coast of Newfoundland to get sensational filming of the annual seal bludgeoning when it gets stuck in the ice. Rocking the boat somehow sets off dynamite stored on board . 27 people die in the explosion. Wonder if that's where the old saying came from.

1939 AD  German troops occupy the last bits of Czechoslovakia which then ceases to exist. Bad day for Czechs.

1990 AD  Iraq hangs a British journalist who wanted to report on an explosion in their rocket factory. Saddam, after assuring PM Thatcher that it would be a fair and open trial for the journalist, secretly orders that the execution take place before Ramadan.

2011 AD  The Syrian War begins and is still ongoing.

And for item number 15 of unlucky events tied to the Ides of March, we are back to taxes again. In 1918, the U.S. Congress set the deadline for federal income taxes being due as March 15th. I'm sure there was no connection between our Senate voting for that date as opposed to the Roman Senators bleeding Julius Caesar dry on the Ides of March. However, in 1954 Congress wised up and pushed the date further away to April 15th in an attempt to remove those possible negative connotations.

Enjoy your day, you now have one more month to hold onto your hard earned money.

Quite a collection! Thank you, RT.

And… the Ides is also the birthday of special person.

RT, when I taught JULIUS CAESAR, we made a big deal out of the Ides of March, but I didn't know half (probably even a quarter) of these facts. A great read!

Good piece, but it seems to me that you could find at least as many unlucky events for any given date. I wonder which day has the MOST disasters associated?

Isaac Asimov wrote a Black Widowers story that hung on a detail you mention in your column. About Latin students, if I recall correctly.

And in Rex Stout's And Be A Villain Archie talks about March 15th requiring Wolfe to pay his federal taxes and quarterly self-employment taxes. "This great nation took him for a ride. Two rides. The Rides of March."

FInally (my, he does go on), when my familly visited Rome a few years ago we saw Teatro Argentina which has the ruins of four temples, and learned that it is right next to the Forum of Pompey where Caesar had his bad toga day. Now there is a cat shelter there and when we were there a very scholarly woman was giving lectures about the temples. All donations went to the cats. So I suspect March 15th is a good day for Rome's felines.

You kill me, buddy! This is great. The ides, crossing the Rubicon, taxes, et al.

“Got no idea what high school guidance counselor recommended that up-to-your-elbows messy career to the Etruscan” Perhaps it was something he just started digging into as a young boy. lol

Leigh, how kind of you to remember that my daughter was born on the ides of May. lol

Theres an Ellery Queen story "The ides of Michael mangoon" set on the old tax day of March 15. A period piece now. And a facebook friend of mine posted about his late father being born on the day, his great aunt said "Of course the Ides of March are evil, Jerry Lee McNeil was born on that day!"

"Of course the Ides of March are evil, Jerry Lee McNeil was born on that day!"

Jeff, that would make a great opening line for a story

I keep nagging my Facebook friend Matt McNeil to write these down in more permanent form! Think of his stories of his Oklahoma/Arkansas upbringing as being Flannery O'Connor on acid...