The Art of Detection

When I was in high school, back in the 1960s, I stumbled onto a paperback book entitled Sherlock Holmes of Baker Street.  The book, which was published in 1962, was not written by Arthur Conan Doyle.  The author of this “biography" of Holmes was W.S. Baring-Gould.  As a mystery fan I immediately purchased and then devoured the volume.

Baring-Gould, as I later found out, was a Baker’s Street Irregular who had devoted much of his life to the study of Sherlock Holmes.  Among the things that interested me about the book were “facts” set down by Baring-Gould concerning the life of Holmes that were not elsewhere reflected in the Arthur Conan Doyle canon.  To wit, Holmes, according to Baring-Gould, was born on January 6, he lived to the ripe age of 108, and in his 108th year he completed an omnibus retrospective on his own life and work, The Art of Deduction.

As I have discussed at some length previously, I am a big fan of hidden alignments that seem to pop up in the world around us, facts that square up in ways that break the boundaries of coincidence and thereby hint at an underlying order.  And we now have yet another example of exactly such an alignment. 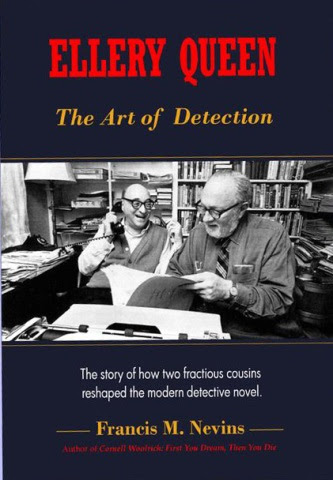 According to Ellery Queen’s 1957 novel The Finishing Stroke, Queen was born in 1905, the same year that his creators Frederic Dannay and Manfred B. Lee were born.  So this year, 2013, would be Ellery’s 108th year.  And commemorating that event Professor Francis M. Nevins, the world’s preeminent Queen scholar (and a man whose own birthday, January 6, is the same as Holmes’) has published a true magnum opus on Ellery, entitled Ellery Queen:  The Art of Detection.

I shared a cup of coffee with Mike Nevins in St. Louis over Christmas (well, actually he drank soda) and he laughed off all of the Holmes/Queen alignments set forth in the previous paragraphs as mere coincidence.  The most he will get from me on this is a wink and a smile.  Unwitting or not, to my mind it is kismet that is playing with us here.

Of course, the comparisons between Holmes at 108 and Queen at the same age, and between the works of Baring-Gould and Nevins, are not perfect.  For one thing, while Holmes’ The Art of Deduction never in fact existed, Nevins’ The Art of Detection, by contrast, is wonderfully real, all 351 pages of it.  But before getting to this encyclopedic tribute to all things Queen, let’s tarry just a moment and talk about Mike.

As noted above, Mike’s 1974 Royal Bloodlines has already garnered an Edgar for its treatment of the Dannay and Lee writing team.  In the introduction to The Art of Detection the basis for his new second take on the same subject is explained by Mike as follows:


I think I just heard a question.  “Hey, didn’t you do that book already, back in the Watergate era?  Well, sort of.  But as I got older I became convinced that I hadn’t done all that good a job.  Fred Dannay was the public face of Ellery Queen, and in the years after we met he became the closest to a grandfather I’ve ever known, but I never really got to know the much more private Manny Lee.  He and I had exchanged a few letters, and we met briefly at the Edgars dinner in 1970, but he died before we could meet again.  Because of his untimely death, Royal Bloodlines . . .  inadvertently gave the impression that “Ellery Queen” meant 90% Fred Dannay.  One of the most important items on my personal bucket list was to do justice to Manny.

That concern (notwithstanding that prior Edgar award) is completely addressed and fully remedied in The Art of Detection, which painstakingly traces the lives, times and collaboration of the two cousins who invented Ellery the detective and Ellery the writer and editor.  No matter how familiar you are with Queen, you will take away new knowledge when you finish reading The Art of Detection.

Like Joe Goodrich’s excellent volume from earlier this year, Blood Relations, which focused on the drafting of three of the best Queen novels in the late 1940s, much of the background material in The Art of Detection, notably including the legendary feuding between Dannay and Lee, is premised on the words of Dannay and Lee themselves, as forth in their letters, which are extensively quoted throughout the new Nevins work.  Also included are correspondence between Nevins himself and Dannay, and between Lee and legendary critic and writer Anthony Boucher, who famously opined that "Ellery Queen is the American detective story," and who contributed plotting to the Ellery Queen radio shows during times that family illnesses kept Dannay from performing that task.  The resulting narrative of the lives of these two writers, much of it in their own words, and of Queen, is a wonderfully detailed portrait.

As already noted, The Art of Detection is encyclopedic in its coverage.  Beyond biography, the reader finds detailed discussions of all of the Queen books, as well as the various ventures into other media, including  the various radio shows featuring Ellery, the (often unsatisfying) Ellery Queen movies of the 1940s, the early television series, and the 1975 NBC series featuring Jim Hutton.  Mike has even offered detailed analyses of the infamous “ghosted”  Queen paperbacks, farmed out to other authors and then edited by Lee, which were commonplace on the paperback shelves of the 1960s.  In short, there is basically nothing about Ellery that is not addressed and answered by this fine work.

As any Ellery Queen fan is well aware, the Queen library, at least in the U.S., has teetered on the edge of extinction over the last few years.  Near the end of his book Mike comments on this as follows:


When the author dies, the work dies.  That is almost always the reality, and certainly it’s the rule in genre fiction.  There are always a few exceptions, like Agatha Christie and Louis L’Amour, but those authors are rarae aves.  I took it for granted that Ellery Queen was one (or two) of them.  I never thought I’d live to see the falling off into near oblivion of what had been a household name for more than a decade before I was born and for at least the first thirty years of my life.

It is certainly true that it takes an historical perspective such as that provided by The Art of Detection to fully appreciate how much a part of mystery fiction Ellery was in the past, and how diminished his role is today.  But hopefully there is still time and space for resurgence.  Certainly excellent works such as The Art of Detection and Blood Relations, each of which has been offered to the reading public in the course of the past year, and Jeffrey Marks’ projected biography of Dannay and Lee, which should be out in 2015, contribute toward resurrecting the works of Queen.

And speaking of kismet, another real indication of renewed interest in the works of Ellery Queen is evident on the very day this article is being posted.  Today, January 29, Calamity Town, a new play written by Joe Goodrich and based on the 1942 Queen novel that first introduced the upper New York State town of Wrightsville, has a "first reading" performance at the New Dramatists playhouse on West 44th Street in New York City.  Let's hope this is just the beginning for this latest Queen opus by Joe.

There is also a new Ellery Queen pastiche (modesty compels me to not include the author in the foregoing list) coming out in EQMM sometime in the coming year.  And particularly eagerly awaited is the imminent re-issuance of 23 original titles in the Ellery Queen library, as reported by Janet Hutchings, editor of EQMM, in her editorial note following publication of Mike Nevin’s article End Time for Ellery? In the January 2013 issue of EQMM.  As Janet observed there, thanks to efforts such as Mike’s “Ellery Queen may soon enjoy a renaissance.”

The once and future Queen?
Posted by Dale Andrews at 00:01

Dale, I think we'd all enjoy a renewed popularity for Ellery. He's one of our favorites. Congrats on the pastiche!

Very nice and congratulations on your latest story

Yet another book I'm going to get! Sounds like a good read, Mike! Anybody read the book from a few years back about Miss Marple?