Since everybody around me seems to be talking about New Years's resolutions, I figured I should make a few.  Not the kind that one usually makes, though--we all know we won't really stop eating jelly doughnuts or get to every meeting on time or do three miles on the treadmill every morning.  My resolutions will be on the literary front, and therefore might stand a better chance of success.  (For some reason I seem to take my writing more seriously than other things, and I'm certainly more organized there than in the rest of my life.)  Besides, I needed something to put in my column for today.

Without further ado, here are my resolutions for 2013:

1.  Use fewer cliches.  Cliches are slippery little creatures, and often manage to sneak their way into my stories without my ever noticing them.  I realize they're tiring and amateurish and distracting, and I'm quick to spot and criticize them when I see them in the writing of others, but somehow I remain guilty of using them myself.  As a southerner, I can't seem to speak for two minutes without using a few cliches--I grew up with them.  As a writer, though, I should know by now that they have no place in good fiction, unless maybe as a part of dialogue.  Or unless you can change them around enough to make them original.  (To quote Mork from Ork, "You've buttered your bread, and now you'll have to lie in it.")

2.  Don't use passive voice.  This is one of my biggest faults, probably because I once did some technical writing, where passive voice works just fine.  In fiction, however, saying something like "the ball was hit by the boy" is not only dull, it's as backward-sounding as Yoda saying, "Down your weapons put."  I hereby resolve to try to write more sentences that have their subjects and verbs in the correct order. 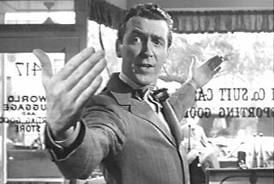 3.  Put in more character development.  I know what you're thinking.  This is a basic rule of fiction, right?  Of course it is--your characters must be believable and interesting and "deep" enough that readers will care for and/or relate to them, and I think I do a fair job of that in most of my stories.  But I have to work at it.  My favorite kind of writing is dialogue and action scenes, and as a result, most of my characters' traits are revealed via what they do or what they say or what others say about them.  When description and exposition are needed as well, that doesn't come easy for me.

4.  Don't overuse pet phrases.  All of us have little sayings that we like to use, in our fiction.  Maybe your characters like to squint into the distance or impatiently drum their fingers on the tabletop.  Such things are fine when mentioned occasionally--they're part of a writer's voice, sort of like Lee Child's frequent use of the phrase "Reacher said nothing."  On the other hand, their verbatim overuse can be irritating.  I was unaware that I have so many "pets" until I prepared the manuscript for my first collection of short mystery stories several years ago--and found that certain phrases showed up a lot in my grouped stories.  Even some words (blink, turn, stare, sigh, pause) were repeated way too often.  Since then I've tried to prevent that, but--like cliches--pet words and phrases enjoy scooting in under the fence when I'm not watching.

5.  Don't use too many commas and semicolons.  I'm one of those people who like commas and semicolons, and for some time now I've been trying to cut back.  Why?  Well, I've finally come to the conclusion that any commas that aren't absolutely necessary to either grammar or clarity are no more than speedbumps that slow the reader down, and as a writer I want my story's path to be as smooth and uncluttered as possible.  As for semicolons, they feel a little too stiff and formal for my kind of fiction writing.  I still use them now and then because they're so good at their main function: to separate complete sentences that are too closely related to need the long pause provided by a period.  But I'm trying to weed out as many as possible.  I once heard that using too many semicolons can make you an embarrassment to family and friends, and my cliches are already embarrassing enough.

6.  Read more literary novels.  When I do, I usually find that I like and admire them.  (The Shipping News, Daniel Martin, Beach Music, The Cider House Rules, etc.) but I confess that I don't actively seek them out.  I'm just one of those folks who'd rather spend a few hours with Percy Jackson and the Lightning Thief than with Schindler and his List.  Sincere apologies to my more learned relatives and colleagues.

There.  Those are my resolutions for this year.  The truth is, if I follow through with them, I'll probably be a better writer.  The question is, can--or will--I do it?  Maybe so, now that I've written them down.  And maybe, like a southern lady I once read about, I'll just think about it later.

John, I haven't made any resolutions, so I think I'll just adopt yours. Each of your topics is something I need to work on--not that I don't already know these are characteristics of effective writing, but that I get tied up in what I'm saying and don't put it on the paper (computer?) as well as I could.

Two words that I overuse are "just" and "actually." I've reached the point that I don't worry about them in the rough draft. I delete all of them or use substitutes during the first rewrite.

Re: Passive voice
I agree that active voice is preferable, but I wish every beginning writer understood that the word "was" is not a sin and that when used as what the elementary kids call a "helping" verb or even occasionally as a linking verb does not constitute passive voice.

I'm printing out today's blog and posting it on the bulletin board by my computer. Maybe--just maybe--I'll abide by these resolutions on my new project.

Fran, I obviously have many more writing faults than the ones I mentioned here--"just" and "actually" belong in the list of words that I overuse a LOT.

As for active/passive voice, I remember reading a good piece of advice someplace. It said that anytime you feel your story is dragging a bit, take a look and see whether that part might have been written with more passive (than active) sentence construction. It suggested that rewording in that way can often help pick up the pace. I resolve to try to do more of that.

Wait a minute, John...you're saying those are things we shouldn't be doing? I thought...well, that's just great! What do I do with my book on clever cliches and my life time collection of pet phrases? I love those things! I thought everybody did. It would've been nice if somebody had mentioned this before now.

David, the sad truth is, if I cut out all my cliches and pet phrases I don't have much to say . . .

David, you can always create a character who uses lots of cliches. That way your reference book won't be wasted.

Fran and Dave, Something along the order of The Stereopticon, whose superpower is to crush evil under the weight of endless cliches? Or is that just another term for parents?

Pet phrases... Mine include sigh, shrug, and frown. I have a file called buzzwords and I search for them before I send out a story. Another good trick is to do a tag cloud of your work and see what the most common words are. someone said that JK Rowling's characters
"stretch their legs" so fatten they should all be ten feet tall.

Pet phrases... Mine include sigh, shrug, and frown. I have a file called buzzwords and I search for them before I send out a story. Another good trick is to do a tag cloud of your work and see what the most common words are. someone said that JK Rowling's characters
"stretch their legs" so fatten they should all be ten feet tall.

In the first (long) short story I wrote, I used the phrase "_____ slurped his beer" to refer to several different characters.

Jeff, as the captain of the Titanic probably said, I hate it when that happens. I think the best solution to that is what Rob said, about doing a search for those "favorite" phrases before the story goes out.