Okay, so that's only true (with some exceptions) in movies.  But I'd cheerfully spend all day with these guys. I first met them when I was ten years old, back in the 60's, watching the 1955 Christmas Classic, "We're No Angels," a black and white TV set, all by myself.  I laughed until I cried, and I remembered lines from it for years afterwards.  It warped me for life.


"I read someplace that when a lady faints, you should loosen her clothing."  - Albert 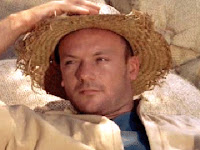 Three convicts escape from the prison on Devil's Island on Christmas Eve.  There's Humphrey Bogart as Joseph, a maniac and master forger, Peter Ustinov as Jules, an expert safe-cracker, in prison only because of a "slight difference of opinion with my wife", and Aldo Ray as Albert, "a swine" of a heart breaker who only fell afoul of the law after asking his uncle for money (the illegal part was when said uncle said "no" and Albert beat him to death with a poker - 29 times).  Oh, and their fellow-traveler, Adolphe - or is it Adolf?


"We came here to rob them and that's what we're gonna do - beat their heads in, gouge their eyes out, slash their throats. Soon as we wash the dishes." - Joseph 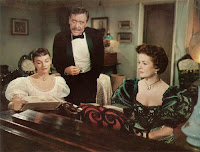 Anyway, these 3 convicts need money, clothing, passports - and they find it all at Ducotel's General Store, the famous Ducotel's, "the one who gives credit".  Along with Felix (Leo G. Carroll), the most inept, innocent, and financially challenged manager in history, his beautiful wife, Amelie (played by Joan Bennett), and their daughter Isobel (Gloria Talbott, in full super virgin mode).

You can see where this is going:  they get hired, they get interested, they get all warm fuzzy, they change their ways, everyone is happy.  Right?  Well, not quite.  Because the big fat plum in this pudding is Basil Rathbone as Andre Trochard, who owns Ducotel's, and has come to Devil's Island - with his sycophantic nephew Paul - to do the books on Christmas Day.  I love a good villain, and Basil Rathbone is as snooty, snotty, sneering, vindictive, scheming, insulting, arrogant, belittling, and generally nasty as they come.  ("Your opinion of me has no cash value."  - Andre Trochard.)  He makes Ebenezer Scrooge look like a warm pussy cat.

There's no Ghosts of Christmas Past, Present, or Future in this one; no "God bless us, every one"; no Tiny Tim; but there's theft and forgery, fraud and deceit, murder and mayhem, all done with sharp, hilarious dialog.  Go.  Rent it now.  Pour a Chateau Yquem (you'll understand later) or its equivalent, pull out a turkey leg, and enjoy!  Merry Christmas!  Compliments of the Season!

NOTE:  This was Joan Bennett's last role for Paramount for a very long time:  she was in the middle of a huge scandal when her husband, the Paramount film producer Walter Wanger, shot and almost killed her agent, Jennings Lang, in front of her in the MCA parking lot.  "I shot him because I thought he was breaking up my home," Wanger said.  Ms. Bennett said Wanger was wrong, that Wanger was in financial trouble, that Wanger was on the verge of a nervous breakdown, but there would be no divorce. (!)  Wanger got 4 months at the County Honor Farm and went back to producing movies.  (Now that's Hollywood, folks.)  Bennett got blacklisted.  Until, O happy day! Dark Shadows hired her as matriarch Elizabeth Stoddard and she got to play with vampires instead of agents and producers.  As always, life is stranger than fiction.  If only she had had an Adolphe...  or is it Adolf?

SECOND NOTE:  This movie has a ton of great lines, but I have to admit my 2nd favorite Christmas movie has my favorite line of all time - the movie is the 1942 version of "The Man Who Came to Dinner", and it's Beverly Carlton (a thinly veiled Noel Coward) commenting on his former costar Larraine Sheldon (a thinly veiled Gertrude Lawrence):

I do like Bogart movies! But now I'm wondering where Chateau d'Yquem fits in. (I seldom drink dessert wines, but it is tasty.)

They don't write them the way they used to!

Eve, it is a great movie, loved it every time I saw it.

Thanks for reminding me.

Well, I've heard the title but I knew nothing about the movie! Gotta see it! And you and Bogie are right about meeting the most interesting people in prison. Of course, I was only working in a mall with a bunch of guys on work-release! Joan Bennett and Leo G. Carroll? Wow!