by Dixon Hill
I must confess: I really enjoy helping my son with his homework. It gives me the chance to teach him important little facets of the subject he's studying. Facets that I believe will not only interest him, but also facilitate the future practical application of what he's learning.

That's something it can be hard for a teacher to accomplish, when confronted by a room full of 36 students, so it pleases me when I get the chance to work one-on-one with my son. 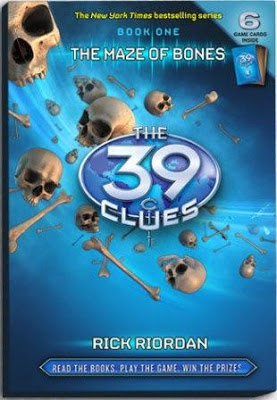 Since I tend to employ the Socratic Method in my teaching, however, this feeling may not be mutual.  My son doesn't exactly relish having ideas teased from his brain through a series of pointed questions, but I feel it's important that he come up with an idea himself, so that he can better understand it.  Meanwhile, Quentin's eye-rolling and pained gasps tell me he'd much prefer that I simply tell him the answer.

Our latest foray into this practice of passive mutual combat took place over the weekend, when I helped him with a book report.  Of course, I couldn't fully help him if I wasn't familiar with the book.  So, after he finished it, I took it into my office and read the thing. And, it was GREAT!

The Maze of Bones is the first installment of the ten-book The 39 Clues series put out by Scholastic Books.  But, Scholastic points out that it's not just a book series. As the company says online, it's: "an interactive and multi-platform adventure series combining books, collectible cards, and an online game..."

The protagonists of the series are Dan and Amy Cahill, two kids (Dan is 11 and Amy is 14) whose parents died in a fire seven years before. Since then, they've lived in a Boston apartment with an au pair, managed by their Aunt Beatrice who lives across town.  But, the true source of the finances clearly lies in the hands of their grandmother, Grace Cahill.

Grace is a wealthy woman who resides in the old Cahill family mansion in Worcester County.  She clearly enjoys the children's company on weekends, but refuses to let them move in, telling them "There are reasons..." why she can't let them.

The story opens with the two kids on their way to the funeral of their beloved grandmother Grace. There, they discover that their extended family is even larger than they had known, and that the four branches of the Cahills have "helped shaped civilization."   Amy and Dan are among family members who are given a choice: accept a one-time inheritance of $1,000,000 -- or forfeit the money and participate in a world-wide scavenger hunt for the lost treasure of the Cahills.  A treasure that will make the finder "The most powerful Cahill in history."  .The reader is also aware of something the children don't know:  The fate of the world may hang in the balance; if the treasure falls into the wrong hands, it could spell the end of civilization.

Dan and Amy have scarcely begun their search, starting in the mansion's library, when a fire breaks out and burns the house to the ground.  Barely escaping with their lives, they also manage to save their grandmother's cat and some of her jewelry before crawling to safety through a tunnel that comes up in the family graveyard. Then -- with the assistance of their young, IPod loving au pair, Nellie, the two kids are off on a whirl-wind adventure to Philadelphia, PA, the catacombs of Paris, France and beyond.

Rick Riordan wrote The Maze of Bones, thus proving he can scribe a story that appeals not only to both boys and girls, but also to their parents as well.   Though other books in the 39 Clues series are written by other authors, the multi-platform series and its over-arching plot line were Riordan's creations.

And, what a creation!  Not since Harry Potter, have I so greatly enjoyed reading books aloud to my children. 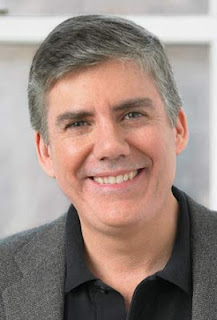 This is a name which may be familiar to many of you, because he also writes the Tres Navarre mystery series, which won the Edgar, Anthony and Shamus awards.  Additionally, he writes the children's Percy Jackson series (such as The Lightning Thief).

Riordan says, "I read mostly fantasy and science fiction in high school, then got interested in mysteries when I got to college." He graduated with a double major in English and History, having published a few stories in his university literary magazine.  After college, he entered teaching, where he says he managed to teach his first love -- mythology -- nearly every year, before leaving academia for a full-time writing career.

His knowledge of history, and love of teaching are clear to an adult reading The Maze of Bones.  My son, however, was too caught-up in the heart-pounding action and adventure to realize he was also learning about Ben Franklin, early printing methods, and even mathematics.  A real Win-Win, when you're a parent!

I knew about the Percy Jackson books and film, because Percy is a favorite of my son, but I'd never read any of the books.  The Maze of Bones, however, impressed me so much that I've placed a hold on a copy of the first Tres Navarre mystery, down at the Poisoned Pen, and intend to go pick it up as soon as I'm finished with this post.  (I also plan to get some more 39 Clues books for my son and me.) So, if you'll excuse me . . .