Two weeks ago I published in this space the speech I gave when I won the Black Orchid Novella Award. I wanted to talk a little bit more about the experience. After that I promise to shut up about it until the winning story is published in May, when I will start babbling about it again. (Hey, I don't win prizes that often; give me a break.)

Anyway, I was informed by Jane Cleland back in September that I was the winner. The reason for the early tip-off, of course, is to encourage the winner to attend, which is exactly what it did in my case.  But it meant I had to keep my trap shut for three months and that was not the easiest thing I ever did. Ironically, I applied for a promotion at the same time and in my c.v. I had to write "This year I will receive another award for my writing, but I can't tell you what it is. Ask me in December." I'm sure the peers reviewing my file wondered what the hell that was about. We visit the Saturday farmer's market almost every week and there is a very nice woman there who makes excellent hats out of recycled sweaters. Back in September I joked that the reason I couldn't fit into one of her hats was that my head was swelled (swollen?) because I just found out I had won an award. She asked which one and of course I couldn't tell her. I did tell her last week and naturally she had never heard of the BONA. Another person wondering what the hell that was about.

Anyway, I did go to the Black Orchid events, wearing one of those recycled hats, oddly enough. It started with the Assembly, in which Rex Stout fans gather to hear experts discuss topics related to the Corpus. (Doyle's writings about Sherlock Holmes are known as the Canon; Stout's reports on Nero Wolfe are known as the Corpus, because it suggests the corpulent nature of our hero).

My favorite speaker was Bob Gatten, who spoke about Rex Stout's work as president of the War Writers Board. I hadn't known that Stout organized a program to discourage writers from using ethnic stereotypes in their writing. "We can't fight racism in Europe and appease it over here."

Another highlight was David Naczycz of Urban Oyster on the history of beer in New York City, a subject very dear to Wolfe's heart, or taste buds.

But the major event was the Banquet. Terri and I were seated next to Linda Landrigan, the editor of Alfred Hitchcock's Mystery Magazine, and James Lincoln Warren, good friend of this blog, and last year's winner. James had an official duty this year, presenting the first of five annual toasts. His was to Rex Stout which he delivered in rhyme. Here is a sample:


In our hearts, we all gather together to meet
At the brownstone address on West Thirty-Fifth Street,
To drink milk or drink beer, or tonight imbibe wine,
To toast a great soul and inimitable mind.

And I can testify that a considerable amount of wine was indeed imbibed. 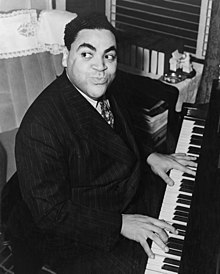 Another feature of the annual banquet is that each table is expected to compose and perform a song (set to a familiar tune) about the Corpus. These are always enthusiastic if not necessarily masterpieces. Ira Matetsky the Werowance (i.e. president) of the Pack said of one number "of all the song parodies I have heard, that was the most recent."

Having been warned about this feature in advance I provided my tablemates with seven songs to choose from. They selected this number, to the tune of "Ain't Misbehavin'." (That's a photo of Fats Waller, of "Ain't Misbehavin'" fame, not Ira Matetsky, in case you wondered.)

Like Jack Horner
we were cornered
in the pasture,
I climbed faster,
That rescue’s what I waited for
Be-lieve me

One more thing. To fund unexpected expenses, the Wolfe Pack raffled off a seat for next year's banquet. I do not expect to be able to attend in 2013 but in the interest of contributing I bought one ticket.

Must have been my lucky night.
Posted by Robert Lopresti at 00:01