Five Years to a Cactus Christmas 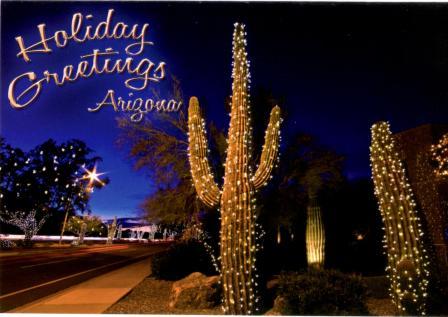 For those of you who had a white Christmas:  We salute you!

Because we never do.  Well . . . almost never.  After all, we (my family and I) live in the Sonoran Desert.  A great place, in my opinion.  But, not a location that gets a lot of snow.

As a kid, I always dreamed of a white Christmas.  And, one year, my friends and I were overjoyed to discover that we'd finally gotten one!  On Christmas morning, we discovered the ground covered with a thin layer of sparkling stuff that HAD TO BE SNOW!  Right up until our parents explained that it was actually just frost on the grass.  Oh, well.

My kids keep up the tradition, however.  Quentin, our 9-year-old son, being the latest to lament snow's absence.  And to opine that he's never even seen the stuff, because we -- his parents -- are too cruel to drive him a couple-hundred miles up to the northern regions of our state during the winter months. 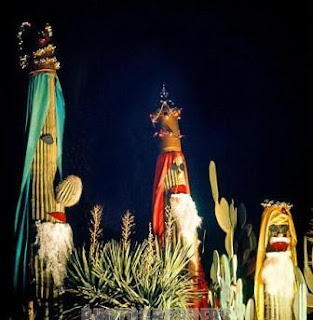 But some things do change, and you wish they hadn't.

Back when I was a kid, there was a house four or five miles away, with three Saguaro (pronounced "su-hwar-roe) cactus in the front yard.

My dad drove us past, every Christmas, to see those cactii, which the owners always turned into The Three Wise Cactus (seen right).

Unfortunately, the house sold several years ago, and the new owners don't keep the tradition.  The Valley is poorer for its absence, in my opinion.  If we ever have the wherewithall to own both house and import three mature Saguaros, the Wise Cactus will ride again.

But, don't hold your breath.

It's been an interesting holiday season here.

To start with:  We managed to get the homestead decorated.

Inside my wife and kids put up the tree. 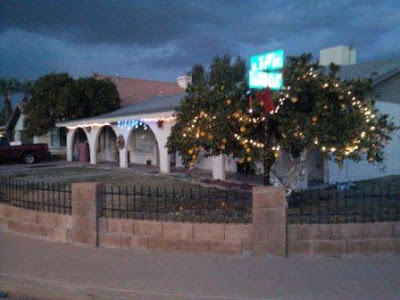 Outside, I got the Christmas lights running along the front of the house until, at the far end, they dropped onto the orange tree in the corner of the yard -- where I changed the lights from multi-color to white, in honor of Dan Pitzer (more about him below).  And, since our Holiday Penguin sidewalk lights finally bit the dust over summer, I splurged on a 7-foot length of snowflake lights that I hung across the roof eave over the front entryway.

The street sign that sits in the front corner of our yard, a few feet from the orange tree, has been festooned with Ornaments (you can't see 'em in the picture, but they're there!), and the pole holding it up is wrapped in shiny red and green garland, topped with a large red bow.  Everything is capped off (or made much more garish, depending on your point of view) by a large pinebranch wreath (I bought it off the Boy Scouts at church) mounted on the column arch nearest the entryway.

Of course, I still couldn't figure out what to do with the small hay bale and uncarved pumpkin we had left hanging around after Halloween and Thanksgiving.  So, I left those out front, thinking maybe the Druids would like it.  I don't know.

For a short while, I did contemplate using a piece of string to hang the pumpkin from the eaves, by its stem, as sort of a "natural ornament," however visions of Quentin and his friends grabbing bats to play a quick round of "Pumpkin Pinata" put a quick end to such ruminations.

About a week before Christmas, the fuse that controlled the 220-volt electricity for our drier blew out, taking a chunk of the busbar with it.  And, this morning, I lost all power in my home office -- located where a previous owner (whom a buddy of mine calls "The Handyman from Hell") walled-in the carport, and ran all the wiring through the outlet reset button he installed in the bathroom he built there.

That's right.  The guy built a two-room apartment, plus bathroom and kitchenette, and ran all the wiring through a reset button in a bathroom outlet.  But, to give credit where it's due, it worked fine -- right up until the busbar in the main fusebox blew up.  LOL

Which is why, as I'm writing this, my computer is powered by a 100-foot extension cable I've run over from the house.  It's also why I'm wearing a coat and have a blanket over my legs, where they stick out below my shorts (and I really wish I could see my keyboard).  But, these hardships pale in comparison to those being suffered by so many others, this holiday season, and past seasons, which brings me back to explaining why I put little white lights on our orange tree at Christmas time.

SERE stands for Survival Evasion Resistance and Escape.  The real name of the course is:: "The SERE 'High Risk' C Course", and it's considered "High Risk" in psychological terms (I still can't remember the bank account PIN I used for five years before I went through the course; it just vanished from my head.).  Well, maybe there is some physical risk, too, since you do things like putting a thing on your arm and getting attacked by an attack dog, so you can learn the best way to handle such a situation -- and what NOT to do.  You also practice negotiating some large, tall obstacles, similar to walls, with broken, jagged concrete chunks lying about on the ground, thirty feet or so below -- not a healthy place to fall..

This is the course that concludes with a "laboratory" in which you get turned loose, with two or three other soldiers, on an Escape and Evasion Lane.  You spend a few days, with no rations or equipment, except a map and compass, working your way cross-country to a specific location, while trying to avoid soldiers from the 82nd Airborne Division who are out there trying to "capture" you.

When you finally reach the grid coordinates in question, of course, instead of being "rescued" you get captured and taken to a POW camp that's been built out near Camp MacKall, NC.  And, this is what you've really come here for.  This is the thing you've been sitting in classes, over the past few weeks, studying to prepare do deal with.

Because this is where you're going to get tortured, beaten, brainwashed and interrogated.  Which is what puts the psychological "High Risk" stamp on the course.

And, this is where I met Dan Pitzer, because he was a civilian instructor at the school.

Back when he was a young sergeant in Viet Nam, on October 29th, 1963 to be precise, Dan was captured by the Viet Cong -- along with Colonel  "Nick" Rowe, a name that's probably familiar to some of you.  I met Dan at SERE School, but I'd known who he was for long time.  Because, I'd read about him in Col. Rowe's book Five Years to Freedom.

Dan Pitzer was held in the jungle -- usually in a small cage -- tortured and mistreated by the VC, until he managed to be released on 11 November, 1967.

Years later, when the army asked Col. Rowe to help design its new SERE Course, the colonel brought Dan on board to help out.  And, that's where I met the guy.  He taught several classes to us, explaining in great detail what he had dealt with as a POW, warning us against the pitfalls he had seen others fall to, and giving us tips on how to make it through, if we ever wound up in a similar situation.

Dan Pitzer bared his soul to us, in those sessions.  His words were deep and brimming.  He shared many things with us, but one of the most poignant (and I can't do it justice here) was this one:

It happened one dark night, when he had reached his lowest ebb as a prisoner, heartbroken and dejected.

Among other things, he'd been left naked against the mosquitoes -- again! -- as punishment for some small infraction.  And now he lay huddled in his cage, being bitten continuously . . . when he looked up.

About six feet away, he saw a beautiful Christmas tree.  It was all lit up with white lights, winking on and off. He stared at it, wondering how this Christmas tree had come to him, in the middle of the jungle, on Christmas Eve.  Oh, God, he silently asked himself, Have I finally gone mad?

And then, he realized:  He was looking at fireflies -- hundreds of them -- collected on a nearby bush.  They had collected in an inverted V-shape, just like a Christmas tree.

In SERE School, they constantly stress the importance of "The Little Victory Each Day Brings."  For Dan Pitzer, that Christmas tree made of fireflies gave him the "Little Victory" he needed that Christmas Eve -- a victory that healed his heart and steeled his mind, enabling him to live through the rest of his captivity, and emerge whole.

After his release, he made it a practice to always fill the tree in his front yard with little white lights each Christmas, to remind him of that tree.  To pay homage to it, and to the way it had come to him.  And in honor for any POW being held far from home in enemy land.

Dan is gone, now.  But, that's why I carry on the tradition -- as do several men I know -- in honor of our mentor Dan Pitzer.  And for any POW being held far from home, in an enemy land.  Perhaps the loneliest existence known to humankind. 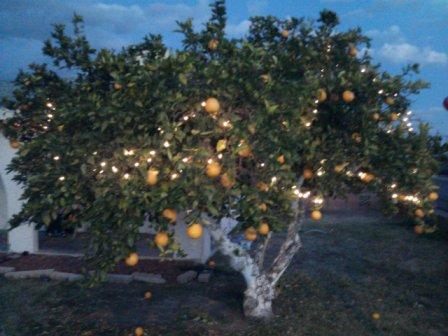