by John Floyd
As usual, I've been reading almost as much as I've been writing, lately.  What's unusual is that in a few of the crime novels I've read, there are some new techniques--or at least seldom-used techniques--that caught my attention. 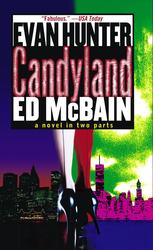 The first "different" approach I'll mention was used by the late Salvatore Lombino--much better known by the pen names Evan Hunter and Ed McBain--in his novel Candyland.  Those who have read him know that the Evan Hunter name appears on his "literary" novels while Ed McBain writes police procedurals, notably those set in the fictional 87th Precinct of the fictional city of Isola.  In fact Lombino legally changed his name to Evan Hunter many years ago, although I would imagine the pseudonym Ed McBain is more familiar to the reading public.  (Genre writers are almost always better known than literary writers.)

Anyhow, the reason Candyland is unusual is that it's two different books in one.  Billed as a collaboration between the two authors, the first half is written by the more sophisticated Hunter and the second half is written by the crime writer McBain.  (It's as if there really were two different authors rather than the same person; both names are even listed on the book cover.)  Also interesting is that the situation introduced by Hunter is then turned into a tale of murder investigation by McBain.  The viewpoint in the first half is that of the killer, and the viewpoint in the second half is that of one of the homicide detectives.  An intriguing approach, and an entertaining novel.

Don't I know you from someplace?

Another (fairly) rare technique is bringing characters from different series together in the same book.  I know it's been done a number of times, but I've encountered it most recently in two novels by two of my favorite writers.

The Panther, a new book by Nelson DeMille, pairs the characters John Corey and Paul Brenner, both of whom were already known to DeMille fans as protagonists in some of his previous novels.  John Corey was the head fred in DeMille's Plum Island, The Lion's Game, Night Fall, Wild Fire, The Lion, etc., and Paul Brenner was the hero of the novel Up Country.  Corey and his wife Kate Mayfield are the main players in The Panther, but Brenner is onscreen for most of the book as well.  As with all series characters, it was fun to meet them again, and also to see how they (when thrown together in the same cage) reacted to each other.

Robert B. Parker did the same kind of thing, occasionally teaming up folks from his three series starring Spenser, Jesse Stone, and Sunny Randall.  In the novel Blue Screen, two of the three series protags even become romantically involved (no, it's not Spenser and Stone), and Parker regularly interchanged minor characters like Rita Fiore, Martin Quirk, and Vinnie Morris.  Again, whenever that happens, and readers discover unexpected but familiar faces, it's fun.  It's like running into old friends while on a faraway vacation.

I'd also like to mention a recent novel by John Grisham, an author I would describe as extremely talented but not extremely innovative. Grisham seems to know what works for him and sticks to it. Except for the occasional lighthearted project (Skipping Christmas) or sports theme (Bleachers, Playing for Pizza, Calico Joe), the only time I've seen him stray very far afield was with A Painted House, which is a literary, Southern, coming-of-age novel told from the viewpoint of a seven-year-old boy.

But in his latest, The Racketeer, he does some things I haven't seen him do before, stylewise, like mixing present and past tense, and writing some chapters in first person and others in third person.  He even writes the first-person sections in the POV of an imprisoned African-American lawyer.  I can't say it'll be a great story--I only just started it--but it looks pretty good so far.

The kinds of things I've described above are merely different literary approaches, not so-called experimental writing.  Experimental, to me, means something like stream-of-conscienceness, or putting all dialogue in italics, or using second-person plural POV, or omitting all quotation marks, or writing the whole story or novel without using the letter "n."  That kind of writing I don't usually enjoy; I think that's just being different for the sake of being different.  (On the other hand, Cormac McCarthy has been known to employ some pretty wild techniques, and he's an author I like a lot.)

How do you feel about "pushing the envelope" in terms of writing style or other literary devices? Have you done that, in past novels or stories?  Would you consider it, for future projects?  Do you enjoy reading fiction that uses new and different writing techniques and approaches?

Since I don't consider myself particularly innovative or adventurous, I was surprised to find myself enjoying most of these recently-read books I've mentioned.  Who knows, maybe I've learned from them.  Maybe one day I'll try something different myself.


BREAKING NEWS: The winner of last week's drawing is C.S. Poulsen, who will choose either Death Will Get You Sober (hardcover), the first in Elizabeth Zelvin's mystery series, or her brand new e-novella, Death Will Save Your Life.  Congrats to C.S.!
Posted by John Floyd at 00:01