by Robert Lopresti
Don't forget you can still enter our contest for a free copy of David Dean's book.  Details are in his column, right below mine...

Before we get to the main topic of today's lecture, a brief musical interlude.

Michael P. Smith, one of my favorite songwriters, released a new CD last  week, and what do you know?  The very first track, "Accokeek,"  is perfect for a mystery website on Halloween, involving both a murder and a ghost story.  I found this concert recording of that song  on Youtube.  Alas, the soundtrack is a bit fuzzy, but it is worth the effort.


Now then.  A happy, safe, and spooky Halloween to each and all.  And speaking of spooks....

At the university where I work a lot of the students have been engaged in an activity called Humans versus Zombies which is, as near as I can tell, a, elaborate and  humongous game of Tag. The players wear orange headbands or armbands depending on which team (species?) they are on, and race between points of safety.

Okay.  Makes more sense then streaking, which was popular on campus when I was a wee laddie.  So when I say I don't get it, I don't mean the game, I mean the current fascination with zombies.

The weird thing is that the world is dealing with, so to speak, two unrelated types of zombies.  The first are the revived dead persons we think of as a piece of Haitian folklore/religion, but which apparently originated in Africa.

Novelist Zora Neale Hurston, doing anthropological research in Haiti in the 1930s, was apparently the first to suggest there might be a pharmacological explanation for zombies; i.e. drugs that simulate death and/or controlled their will.

But zombies had already staggered into popular culture.  White Zombie, starring Bela Lugosi had appeared in 1931.

And it is in movies that the second wave of zombies arrived.  George A Romero is credited (blamed?) for starting it with his 1968 hit The Night of the Living Dead.  And the odd thing about this, of course, is that the movie never calls the stumbling brain-seekers zombies.  But those are the ones that people have in mind when they use the term today.

People who think hard (maybe too hard) about society have suggested that we can learn something about the current world view by noticing which monsters are popular in a given time.  For example, see the movies in the fifties in which the monsters are the productions of mutations caused by nuclear weapons.  What were people worrying about then?  You bet.

Or consider the rash of vampire movies in then 1980s when AIDS made contact with blood a terrifying issue.

So what does it say about our society today that a prominent monster is the mindless, undead, seeker of brains?  Insert political joke here, I suppose.

And speaking of politics, our favorite federal government joined the zombie industry this year, with predictable results. 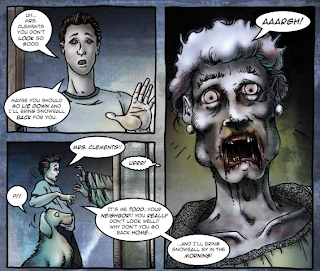 The illustration on the right is from a comic book created by the U.S. Centers for Disease Control, using a character's dream of a zombie attack as an opportunity to explain how to prepare for an emergency.

I'm sure it seemed very cute and clever, but when, a few months later, some people were accused of doing nasty cannibalistic things the CDC was forced to issue a statement:  "CDC does not know of a virus or condition that would reanimate the dead (or one that would present zombie-like symptoms).”

As I have said before, if a government author thinks he is being clever and hip, he is probably making a tragic error.

Let's go out with some more music.  Do it Rockapella!...