The Thirteenth Child, or, It's Alive! Part Two 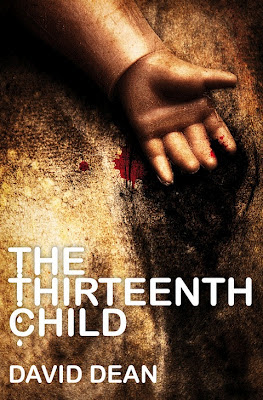 As I warned in "It's Alive" Part One, if my horror novel actually made it to press, you would hear from me about it. Well, come October 5th, The Thirteenth Child will be ushered into the light of day. My days at the hands of a cruel and callous developmental editor are at an end!

He had his say… oh yes indeed, he had his say! His perverse delight at savaging my work was evidenced on page after page of my manuscript. His "notes," as he referred to them, full of delight at every perceived deviation in story logic, every imagined run-on sentence. Not content with these, he trod heavily upon my golden prose, stamping out similes and metaphors inspired by the gods themselves; descriptions so colorful and vaulting in their imagination that he could only have been driven by envy! Oh yes… he had his say!

My book… my wonderful book lay in tatters when he had done. My publisher, Steven Booth of Genius Book Publishing, was deaf to my cries of outrage. Instead, he urged me to get on with it, and hung up the phone. Even Robin, my wife of thirty-four years, appeared indifferent to the many wrongs I had suffered. As I said in the previous posting, she never showed any real enthusiasm for my horror novel. She too, I perceived, was part of the problem.

I hid in my room with the curtains drawn and refused to come down. Robin, it would appear, has a busy social schedule, and was in and out of the house. After a few days, she stopped asking me to join her for meals, or a morning at the beach. She went to wineries and restaurants with our so-called friends, their laughter drifting back to me as they drove away. No one cared. Time passed.

One day, I don't know which as I had lost track of such things, I scratched at my growing beard and glanced over at the odious "notes." I fingered a few pages loose from the stack. They came away smudged; it had been awhile since I had thought to bathe. No matter… I was all by myself in this world. I read a few paragraphs, then flung them down again. Blasphemy!

Sitting in the dim room, I selected just a few of them… the least unreasonable suggestions, and studied them once more. Perhaps… just perhaps, one or two slight alterations might not damage my work overly much. Besides, I had to throw some kind of bone to my surprisingly intractable publisher. One or two little alterations might not hurt.

I did it. Then I read the affected pages. Not bad… not too bad. He might have been on to something with those after all. I tried a few others. The results there weren't completely awful either. Those passages read a little better, maybe… but just a little. I went on.

It was like a fever. Now that I had started, I couldn't seem to stop. Tearing through page after page, I went to work on my novel, stripping it down to the bare essentials, trimming the fat… it was addictive. I began to laugh as my fingers tore across the keyboard. Someone pounded on the locked door, I thought I heard Robin's voice calling, "David… honey? Are you all right in there? What are you laughing at, sweetheart? You're scaring me!" I ignored her and went on… and on… and on.

A month later, I was suddenly done. I read the book one last time. Cautiously satisfied, I sent it on to Steven. A few days later, he responded, "It's on… The Thirteenth Child is on for October 5th." I started to laugh again, to laugh long and hard, but Steven interrupted, "Knock that stuff off! Go get a shower and shave and stop scaring people… and tell Robin you're sorry for being such a jerk!"

So October 5th, it is. I hope that you give either the paperback or ebook version a shot. I don't think you'll regret it, even if you're not a horror fan per se, as The Thirteenth Child also has a bit of police procedural woven into it. It's not a gore-fest, but it is scary, and features a unique (if I do say so myself) antagonist in the character of Gabriel. And it's just in time for Hallowe'en which is when the climax of the book occurs. A perfect read for the season. Marvelous Christmas gift, as well.

Since the rewrites, I've showered and shaved, as Steven suggested, and come down from my room. Our dog has stopped barking at me, and Robin and I are on speaking terms again. Though sometimes I find her watching me from the corner of her eyes. No matter. She may think me mad, but no matter. All that's important is the book… it's alive, you know… oh yes… it's still alive!
Posted by David Dean at 00:01