Today is Superbowl Sunday, which means approximately half the North American population will be watching American football instead of reading our cogent articles. With that in mind, we turn our attention to bathroom humor. By that, I mean a 540 page book given me for Christmas called Uncle John's Heavy Duty Bathroom Reader, 23rd addition, published by BRI, the Bathroom Readers Institute. (Thanks, Sharon!) It carries a warning: This book may make you smarter than everyone you know. 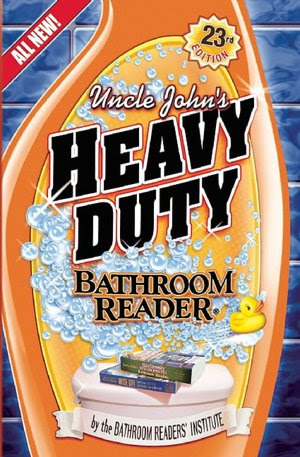 What is a retronym, you ask? Well, you didn't ask, but I have to maintain a word count.

A retronym is almost the opposite of a neologism. It's a new word or phrase used to describe an old term because it's been replaced by something new.

It might help to explain its opposite. For example, the mechanized improvement upon the archer's traditional bow was called the crossbow, and other variations became known as the recurved bow and the compound bow. When men dropped engines into carriages, the new inventions were called horseless carriages or motor cars to distinguish the new-fangled devices.

Simple, right? In the early 1900s, World War I wasn't called WW-I; rather people called it The Great War or with more hope than realism, the War to End All Wars. Sadly, the unthinkable happened again, and in the 1940s with World War II under way, the former Great War was redubbed World War I.

Similarly, prior to 1959, we had no need to refer to the 'contiguous' 48 states or the 'continental' US, because that would have been redundant. However, after the Sandwich Islands and Alaska became states, the terms came into existence.

Here are a baker's dozen, most from the aforementioned book:


Fill in additional retronyms below.
Posted by Leigh Lundin at 00:01