by John Floyd
Some quick background info: For the past eleven years, I've taught six night courses every year in the Continuing Education department at Millsaps College here in Jackson, Mississippi. Each course is seven weeks long, and the subject is "Writing and Selling Short Stories." (Actually, there are two different courses. One's intro-level and the other's advanced. The second of my courses has the brilliant and original title "Writing and Selling Short Stories, Part 2.")

Lest I misrepresent myself, I should explain that I have no formal training that would qualify me to be an instructor on these topics. I was, in earlier episodes of my life story, an Air Force captain and an IBM systems engineer. I am not an English major, I don't have an MFA, and my only journalism experience is that I drew cartoons for my high-school newspaper. What then, you might well ask, steered me to teach courses in writing and selling short stories? The answer is two things: (1) I simply love to talk to other writers about writing, and (2) I've sold a lot of short stories. An added bonus--one I never thought of before agreeing to this "job," long ago--is that it's brought me in contact with some of the most fascinating people I've ever met. At this point I'm three weeks away from finishing up the classes in our winter session, and--as usual--I've been blessed with a number of talented and interesting students.

How interesting? Well, I got to thinking the other day about the several hundred folks who have endured my courses, and what I came up with gives proof to the "from all walks of life" cliche. My students' ages have ranged from fifteen to eighty-six, and their regional and ethnic backgrounds are almost as varied. So are their occupations.

On the remote chance that any of you are interested in this kind of thing, here are some of the day jobs of the writers who have subjected themselves to my instruction in the art (?) of creating and marketing short fiction:

Lawyers -- At least one per class, it seems.
Schoolteachers
Bankers
Physicians -- Two dozen or so.
Pastors
Accountants and engineers -- A LOT of these folks. I have no idea why.
Salesmen
A head chef
A nun
A limo driver
A cartoonist
TV newcasters -- Three of them, so far.
Firemen
Artists and musicians
Full-time students -- Two in high school, several in college.
Veterinarians
Stay-at-home mothers
Journalists
Police officers -- Plenty of grist for the story mill, in that job.
Farmers
English professors -- Enough of them to thoroughly intimidate me.
Computer programmers/analysts
Nurses
Published novelists -- Maybe half a dozen.
Mechanics
Government employees -- Many, many of these. Why? Another mystery.
psychologists
stockbrokers

NOTE: I've never had a career politician as a student, which seems strange since fiction writers are liars by trade. (Not that I'm complaining.) 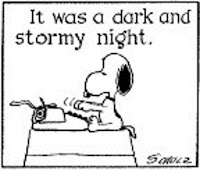 One fact that's always surprised me is that of the 68 groups of students I've had so far, 66 of them included more women than men, and a few classes were made up entirely of women. Does that mean that there are more female writers, these days? Again, I have no idea. There are almost certainly more female readers.

I was also surprised to discover that the classes are usually equally divided in the following categories: (1) outliners vs. non-outliners and (2) literary writers vs. genre writers. The lit/genre proportions are a little puzzling because, as a nation, we obviously have more readers of genre fiction out there, than (so-called) literary fiction. Of those who are genre writers, though, I've noticed that many are fans of mystery/suspense, which is my first love as well.

Something that doesn't puzzle me is that these adult-education "enrichment" classes are so much fun for the instructor. I think there are two reasons for that. First, the subject taught is usually one that the teacher truly enjoys; second, adult-ed students actually want to be there. Attendance is voluntary, not mandatory. They're even paying to be there. Sometimes that makes a big difference.

I recognize that occasional seminars and workshops and conference sessions are fun to teach as well. But a regular, ongoing, classroom-environment course is especially good--at least for me--in that it always keeps me current and in-touch and busy with the kinds of things I like to do anyhow. It also makes me feel a certain responsibility to try to keep publishing regularly. Students in pilot training need the reassurance that their instructors still remember how to safely and effectively fly the planes, and I think that applies to other kinds of students as well. (Failure on my part, of course, only means rejection letters, not crash landings--but it's still failure.)

Another thing I sort of expected: Nonfiction writers don't seem to find it difficult to make the switch to short stories. Any writing experience helps, whether it's technical journals, legal briefs, self-help columns, or what--and writers who have previously done only nonfiction seem thrilled at the sudden freedom offered by fiction, in both content and style. Their imaginations can run wild. And even the English profs tend to welcome, rather than resist, the chance to occasionally splice commas, fragment sentences, and split infinitives.

Get out of there, Billy--your class is over HERE

The only drawback to this teaching gig is that my classroom happens to be down the hall from a class on belly dancing and another on French wines. Students who have to walk past those open doors (especially when the gyrating and tasting are in process--I'll leave it to you to figure out which group is doing which) are probably often tempted to stop in there rather than continue on to a place where we'll be talking about manuscript formatting and simultaneous submissions and kill fees and dangling modifiers. But continue they do, and I think many of them wind up enjoying this writing stuff as much as I do.

Question: Do any of you teach, or have any of you taught, these kinds of courses? Have you ever enrolled in them? Any insights you might want to offer?

By the way, it just occurred to me that terms like "added bonus" and "continue on" might be redundant. Maybe I should learn to practice what I preach . . .
Posted by John Floyd at 00:01