by R.T. Lawton
Six Months out of the academy and starting to put into practice what the Wise Men had taught us. Had my .38 caliber, snub nose, Smith & Wesson six shot revolver, standard issue in those early days for Basic Agent Trainees. Most of us quickly learned to wrap large rubber bands around the slender handle in order to give the thing some friction so it wouldn't slide down inside the back of your pants leg and out on the floor. After all, you couldn't really wear a holster if you did undercover work, and you were better off keeping your weapon in the same place all the time so your subconscious knew where to find it when you needed it in a hurry. They say you react in stressful situations according to the habits you've learned.

On this particular Thursday morning, two agents, "Bigun" and "Preacher," had a meet set in a grocery store parking lot on the Kansas side of the river. They'd already bought twice from two burglars (let's call them Lefty and Louie), hard core street guys who sold amphetamine for a second income. This was to be a third buy, followed up with a grand jury warrant for their arrest at a later time. No problems expected.

Being a new guy, I got assigned to surveillance from inside the store while other back up agents sat in cars on side streets and watched for the bad guys to drive in. I had to wear a suit that day, so tried to look inconspicuous. Picking a spot inside the east doorway near the shopping carts, I could look out the huge plate glass windows and see most of the parking lot.

Bigun and Preacher showed on time and parked in the middle of the lot. 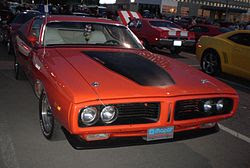 They'd borrowed their Group Supervisor's brand new government Charger for their undercover deal. Good choice as it didn't have a radio installed yet, so if the bad guys got in the car and looked around there would be nothing suspicious for them to see. Now it was merely a case of waiting for the show to begin.

After 15 minutes of me standing by the shopping carts, the store manager got a little curious.
"Can I help you," he inquired.
To deflect suspicion, I appealed to his male chauvinist side.
"Nah, I'm just waiting for my wife so we can buy groceries. She's running late as usual."
He sympathized and departed to go about his store duties.

Several minutes later, here came Lefty and Louie in their vehicle. Parking on the far east side of the lot, they got out of their vehicle and walked toward the undercover Charger. Our two agents got out and met them halfway.

Murphy's Laws of Combat: Law #29 - The enemy invariably attacks on only two occasions ... when you're ready for them and when you're not.
What we didn't know at the time, was Lefty and Louie didn't have any drugs to sell this go around, but they still wanted the money. Also, what none of us could see except for the two undercover guys, was that Lefty and Louie had drawn automatic pistols on our two agents, with intent to rob or worse.
I watch Louie and Preacher start walking towards the bad guy's car, while Bigun and Lefty start walking toward the Charger. To surveillance, nothing looked out of place.

Rules to a Gun Fight: Rule #19 - Decide to be aggressive ENOUGH, quickly ENOUGH.
Bigun opens the driver's door and gets in. Lefty tells him to slide over because he'll be the one driving. Bigun slides over. As soon as Lefty sits down in the driver's seat, Bigun draws his .38 and at point blank range blows a hole through Lefty's right arm and into the lung.
Lefty leaps out of the Charger, slams the door and blows two holes through the driver's window. Fortunately for Bigun, he leaned forward to go out the driver's side after Lefty, so both rounds passed over his back. Lefty starts running northwest through the parking lot with Bigun chasing him.

Gun Fight Rule #3 - Only hits count.
Now they have my full attention. I draw my trusty .38, step on the electric door pad, get outside and pop one at Lefty as he crosses my front from left to right. Damn, I didn't lead him enough. All that amphetamine in Lefty's system means he is really picking 'em up and putting 'em down, still he manages to cap a round into the store window on my right.

Murphy's Law #6 - Incoming fire has the right of way.
The rest of surveillance storms the parking lot on foot, guns popping here and there. For a moment, it looked like my senior partner and Lefty were going to run into each other, but Lefty ducks behind a car parked right in front of the store, while my partner ducks behind the other side. They then take turns bobbing up like a couple of out of synch Jack-in-the-Boxes and blast away at each other through the car's side windows.

Murphy's Law #24 - The only thing more accurate than incoming enemy fire is friendly incoming fire.
Gun Fight Rule #14 - Use cover or concealment as much as possible.
Having quickly realized that any shots missing Lefty are then coming my way, I duck behind the car nearest to the store doorway. At that time, it appeared to me that the boys had Lefty trapped behind the shot up car, so I look to my left to see what happened to Preacher.

Murphy's Law #3 - Automatic weapons ... aren't.
Turns out, when all the shooting started, Preacher drew his hideout gun, a small caliber automatic pistol. His captor, Louie, with a .25 caliber automatic stolen from the same sporting goods store as Lefty's pistol was, aims at Preacher and pulls the trigger. Nothing. Gun jammed. At the same time, Preacher pulls the trigger on his automatic. Nothing. Gun jammed.
Louie lights out for the tall timber, or in this case, the waist high brick wall at the south end of the parking lot. He finds a thirty foot drop to a sidewalk on the other side, so he slumps down with his back to the wall. By now, I'm using a different car for a shield, pointing my .38 at Louie and commanding him to drop his weapon. He keeps pulling the trigger on his automatic like it will somehow magically work one of these times. His brain has obviously gone into shock. I'm not sure he's really cut out for the business he's in. Finally, I give up, walk over and take it away from him.

So now, You're wondering about Lefty.

Murphy's Law #22 - A sucking chest wound is nature's way of telling you to slow down.
When Lefty ran out of ammo, he bolted from behind the car, gun in hand, ran along the front of the store and went in the same door I'd come out. Damn, thought the boys had him cornered. As it was, Bigun tackled Lefty in the shopping cart area and arrested him.
In the sudden silence that followed, everybody looked around to see if there was a flag on the play. Final situation: bad guys dealt with and no civilians or agents down. Final shooting score: four cars, two store windows, a can of tomatoes and Lefty.

Murphy's Law #15 - Never draw fire, it irritates everyone around you.
I can't say I was requested to never come back to that store again, but the manager did start off our next conversation with, "I thought you said you were here to go shopping." We never did become friends. 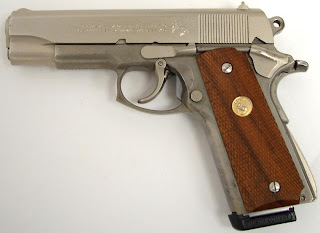 Moral:
Gun Fight Rule #24 - Never attend a gun fight with a hand gun, the caliber of which does not start with a "4".
Having witnessed the poor knockdown power of a .38, I soon copied the example of our Marines who fought drug crazed Moros in the Philippines during the 1900's; I got myself a .45.

Just goes to show it helps to know the Laws and Rules if you want to stay ahead of the game.
Posted by R.T. Lawton at 00:01