A few weeks ago, when Joe Paterno died three months after leaving his job, several news commentators remarked how often people who work into old age die fairly soon after quitting work. Clearly, the inference was that stopping work led to their deaths. I propose that many times, the cause and effect are reversed. Some people won’t stop until working is totally beyond their health and strength. Rather than retirement causing the decline, the person’s decline forces them to finally quit work.

Paterno doesn't exactly fit this scenario because he was fired and forced to leave his job. One announcer drew the conclusion that being fired from his position CAUSED his cancer. I don't believe that! Had Paterno not been involved in the Penn State scandal, he would have eventually grown too old, too tired, too ill and his physical condition would have forced retirement. I think that he would have held out until his demise was near. Regardless, my sympathies are with the Paterno family.

A hundred years ago, when I was a college undergraduate, I learned a classic example of misinterpretation of cause and effect. Statistics showed that crime rates in rocketed during summer months. The sale of ice cream rose significantly there during the hot months also. Therefore, can we conclude that eating ice cream makes people commit crimes?

Of course not! More probable is that hot weather (especially back before air conditioning became common) led to more people being out and about to commit crimes or that tempers flared more often when one is hot and uncomfortable. People who are miserably hot are shorter-tempered. People also ate more ice cream when the weather was hot. Increased crime and eating ice cream weren’t an example of cause and effect. They were both effects of the cause—in this case, hotter weather. 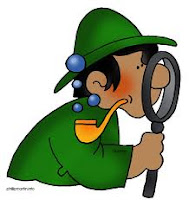 Here are three short mystery/brain teasers. No, I didn't create them. They remind me of those amazing flash fiction mysteries that John Floyd has in Women's World. I always try to solve John's before tipping the mag upside down to read the solution. These were emailed to me by my fantasy writer friend Nynaeve.
Posted by Fran Rizer at 00:01