It happened again, and this time it was my fault.

You know how it happens.  Spellchecker has an evil twin that changes your word by one letter, and you don’t notice it until it goes to print.

Readers may recall that last year, I wasn’t too happy when the virtual blog tour company paid by my publisher changed the title Rowena and the Dark Lord to Rowena and the Dark Lard.  Sales were not stellar.  However, the hilarity that ensued was probably worth the typo.  Seems there were all sorts of people willing to suggest alternative plot lines for a book about Dark Lard.  Many were a mite more entertaining than the original concept (she said ruefully.)

Here’s a small sample:
Protagonist moves back to Land’s End and opens up a bakery.

Protagonist messes up another spell that causes all who look at her to turn into donuts.

Well, this time I did it to myself.

REALLY not cool to request a formal industry review for a book and misspell the title.

No matter how it reads, "Cod Name: Gypsy Moth" is not a tale <sic> about an undercover fish running a bar off the coast of Newfoundland...

That wasn’t enough.  People were quick to respond with suggested plot lines on Facebook.  Other authors (22 in fact) had to wade in <sic>.

he'd have to scale back his expectations - a bar like that would be underwater in no time.

and here's me waiting with 'baited' breath

Readers will dive right into that

That's a whale of a tale

that book will really "hook" a reader

Smells pretty fishy to me

We're really floundering here; no trout about it.

Okay!  In the interest of sane people everywhere, I’ll stop on that last one.

The real name of the book?

It isn't easy being a female barkeep in the final frontier...especially when you’re also a spy!
Nell Romana loves two things: the Blue Angel Bar, and Dalamar, a notorious modern-day knight for hire.  Too bad he doesn't know she is actually an undercover agent.

The bar is a magnet for all sorts of thirsty frontier types, and some of them don’t have civilized manners. That’s no problem for Dalamar, who is built like a warlord and keeps everyone in line. But when Dal is called away on a routine job, Nell uncovers a rebel plot to overthrow the Federation.  She has to act fast and alone.

Then the worst happens.  Her cover is blown …

A funny thing happened on the way to the crime book: it became a comic sci-fi spy novella.

That’s the frustrating thing about being a fiction writer.  Sometimes you don’t pick your characters – they pick you.

I was sitting at my desk, minding my own business, when…no, that’s not how it happened.

It was far worse.

“Write a spy novel!” said the notable crime reviewer (one of that rare breed who still has a newspaper column.) We were yapping over a few drinks last spring.  “A funny one. Modesty Blaise meets Maxwell Smart, only in modern day, of course.”

“Sure!” I said, slurping Pinot by the $16 glass.  After all, crime is my thing.  I was weaned on Agatha Christie.  I had 40 crime short stories and 5 crime books published to date.  This sounded like the perfect 'next series' to write.

And I intended to.  Truly I did.  I tried all summer. I even met with a former CSIS operative to get the scoop on the spy biz (think CIA, but Canada – yes, he was polite.)

Wrote for two months solid.  The result was…kinda flat.  (I blame the Pinot.  Never take up a book-writing dare with a 9 oz. glass of Pinot in your hand. Ditto good single malt.  THAT resulted in a piece of erotica that shall forever be known under a different name…  But I digress.)

Back to the crime book.  I started to hate it.

They didn’t.  It was a criminal sit-in.  They wouldn’t leave until I agreed to write their tale.
So the modern day spy novel became a futuristic spy novel.  Modesty Blaise runs a bar on a space-station, so to speak.  Crime in Space, with the kind of comedy you might expect from a descendent of The Goddaughter.

Two more months spent in feverish writing.  Another two in rewrites.  Then another, to convince my publisher that the project had legs.

CODE NAME: GYPSY MOTH is the result.  Yet another crossing the genres escapade.

Written by me, and a motley crew of night visitors.

Now hopefully they will keep it down in there so I can sleep.

It isn't easy being a female barkeep in the final frontier...especially when you’re also a spy!

Nell Romana loves two things: the Blue Angel Bar, and Dalamar, a notorious modern-day knight for hire.  Too bad he doesn't know she is actually an undercover agent.  When Dalamar is called away on a routine job, Nell uncovers a rebel plot to overthrow the Federation. She has to act fast and alone.

Then the worst happens.  Her cover is blown…

The Toronto Sun called her Canada’s “Queen of Comedy.”  Library Journal compared her to Janet Evanovich.  Melodie Campbell got her start writing standup.  She has over 200 publications and nine awards for fiction.  Code Name: Gypsy Moth (Imajin Books) is her eighth book. 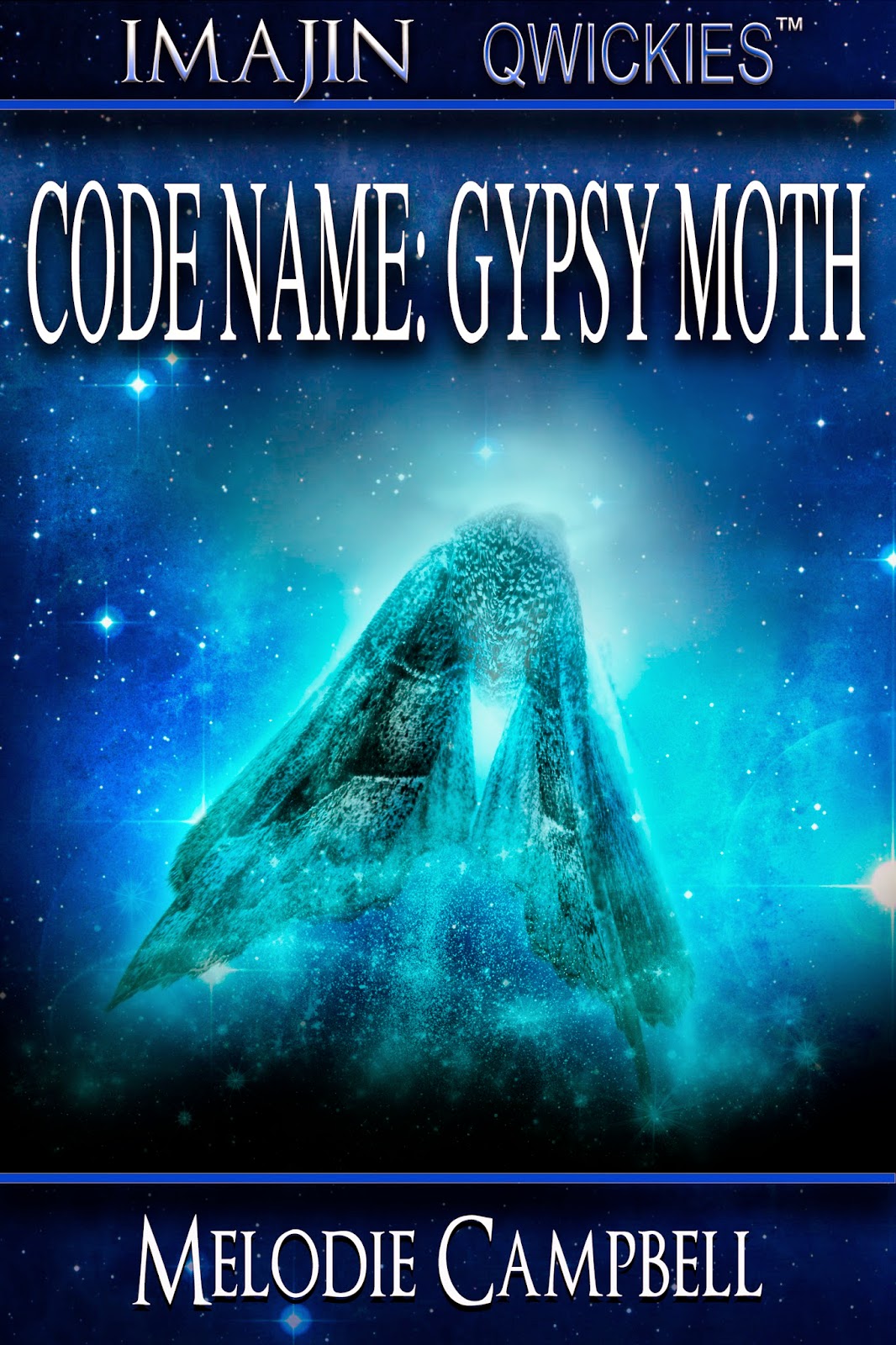 Posted by Melodie Campbell at 00:00 10 comments