The St. Patrick’s Day Crime Blotter, and a Whole Lot of Blarney*** 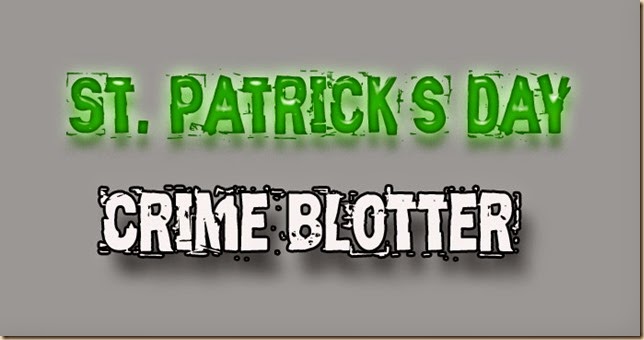 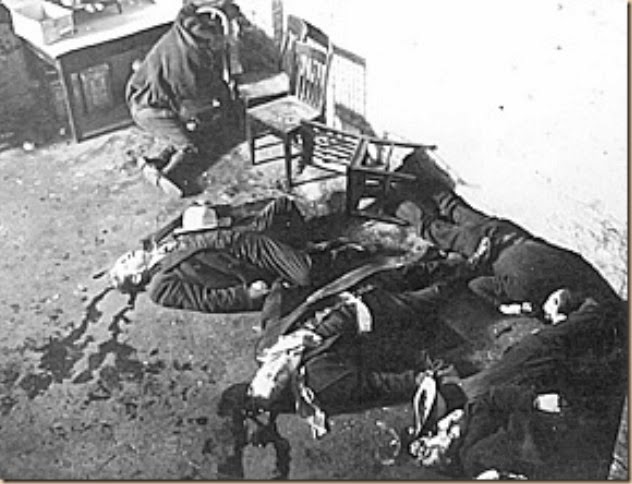 Everybody knows the famous—infamous—St. Valentine’s Day Massacre of 1929. So one might think St. Patrick got short shrift. I mean in a world where “my massacre is bigger than your massacre” is important stuff, one might think St. Paddy and St. Val would come to blows over who has the better holiday and, of course, who has a more impressive spot on the crime blotter.

After all, See’s Candy makes marshmallow-shaped hearts for Valentine’s Day, but what do they do for St. Patrick’s Day? A handful of chocolates in green boxes and green tinfoil and chocolate “potatoes”. Major slight. Which reminds me of the line from the Ernst Lubitsch classic To Be or Not to Be, where Colonel Ehrhardt (Sig Ruman) says, “They named a brandy after Napoleon, they made a herring out of Bismarck, and the Fuhrer is going to end up as a piece of cheese!”

Well, the chocolate potato is like the cheese, especially compared to marshmallow hearts. Where the herring fits in I’m not quite sure.

So, let’s take a little quiz:

Who was the first St. Patrick’s Day death?

Uh, that’s a tough one, let me think. St. Patrick.

Right you are. That’s why the holiday is observed on the date of his death, March 17th.

Now, let’s see. It seems St. Val’s Day is in the lead what with the Massacre named after him, and seven murders from shotgun, pistol and Tommy gun blasts, the latter most likely emerging from Stradivarius violin cases.

So, it looks like St. Val is ahead in the Crime Blotter Race. But the fact is that St. Pat’s day can compete with St. Valentine’s Day. First, a couple minor examples: 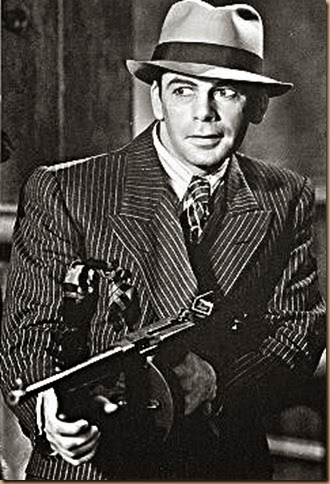 Turino, a longshoreman. They’d quarreled. And I guess you don’t quarrel with one of the founding members of Murder, Inc. Due to a legal technicality, Anastasia was given a retrial in 1922, and because four of the original prosecution witnesses had somehow magically disappeared, Anastasia’s sentence was overturned.  The question is, were they given anesthesia by Anastasia before their disappearing acts? Like I said, I guess it doesn’t pay to quarrel with one of the founders of Murder, Inc.

March 17, 1996, the play Getting Away with Murder, by Stephen Sondheim and George Furth opened. March 31, 1996: the Broadway production of the play closes after seventeen performances— one day for each day of March leading up to St. Pat’s day. Maybe not a record, but not bad. Even Sondheim couldn’t get away with this one.

And there’s a couple more pretty gruesome events that occurred on March 17th in history that my wife asked me to excise in the name of good taste, but if you look up Richard Ramirez, a.k.a. The Night Stalker, Rachel Manger Hudson and Uganda on this date you’ll get an idea.

Now here’s the Kicker—St. Pat does have a massacre named in his honor. Bet you didn’t know that, did’ja?

March 16, 1926: Chicago gangster Jean Arnaud is having a St. Patrick’s Day party at his sister-in-law’s apartment. (Even though it’s the day before, it counts for St. Pat’s Day since it is in honor of that holiday and is, indeed, known as the St. Patrick’s Day Massacre.) Rival hood Alphonse “Scarface” Lambert wants to off Arnaud and his peeps. The party starts around 4:30pm and Scarface has several teams of gunmen hit the party by 5pm. Besides the in-house teams, sniper teams are on the buildings across the street. Scarface really wants this dude dead and gone. The whole attack takes less than ten minutes. There are no survivors, and the death count is never officially known, as some of the people who attended the party are never found.

A cop on the scene describes it as a "human slaughterhouse." And you thought your last party bombed.

All of the shooters, Scarface, and everyone involved in the crime escaped. No prosecutions follow.
And even with all that blood and gore, Scarface didn’t get what he wanted as one of Arnaud’s lieutenant’s took up the reigns of Arnaud’s crime family and then finked Scarface out to the cops. Equilibrium was restored and all was right with the world of crime again.

But for some reason St. Patrick’s Day gets the short shrift on this Massacre, which occurred before the more famous St. Val’s. So you see, it’s sort of like Betamax vs. VHS, and maybe the “best” massacre is forgotten. But, as we now know, St. Val ain’t got nothin’ on St. Pat in the Crime Blotter Department.

***Disclaimer: No already-dead people were hurt in the making of this article. Nor is its 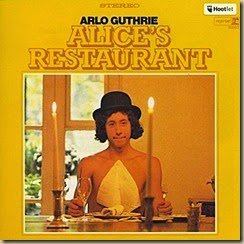 intention to cast aspersions on them or make light of their fate, or on the fate of the guilty, or innocent. Nor to cast aspersions on Thompson submachine guns, Betamax players, St. Patrick or his day, St. Val or his day, Irish people, Irish men, Irish women, Irish girls, Irish boys, Ireland, Jill Ireland, Kathy Ireland, John Ireland, Irish holidays, James Joyce, Ulysses, William Butler Yeats, J.M. Synge, Bono, Enya, Celtic Women (in general and the singing group), Danny Boy, my friend Denise, leprechauns, the blarney stone, blarney, the color green in all its variations, the Emerald Isle, Alphonse “Scarface” Lambert, Jean Arnaud, Stephen Sondheim, George Furth, Murder, Inc., the years 1921, 1926, 1929, 1996 (or any other years), chocolate potatoes, Alex Trebek, Jeopardy, Double Jeopardy, the Daily Double, Ernst Lubitsch, Sig Ruman, Col. Ehrhardt, Bismark, Napoleon, herrings, cheese, the massacree at Alice’s Restaurant, massacres in specific and massacres in general, and the specific massacres mentioned in this piece, but not limited only to those mentioned by name, Jack Webb or R.A. Cinader. No names have been changed to protect the guilty or innocent. Jack Webb had nothing to do with the writing of this article.

And yes, murder is bad, I get that. This article is satire—Gallows Humor—as such it closes Saturday night.  But, we also know, Saturday’s alright for fighting.

Just one more thing, is it too late to buy stock in Murder, Inc.? 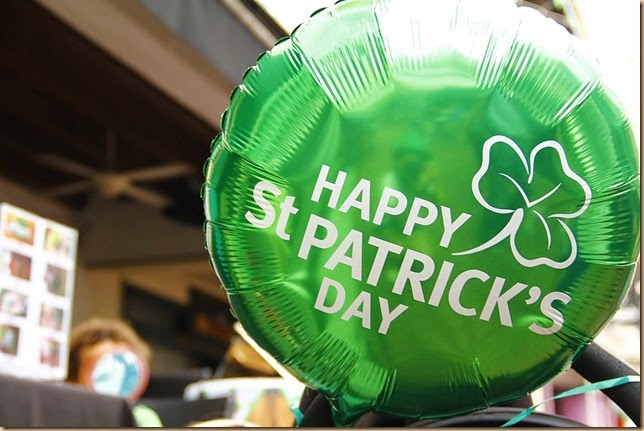 And from the Department of BSP: I’m happy and honored to announce that my story, “Howling at the Moon,” came in at #7 in the Ellery Queen Readers Award Poll. And that fellow Sleuthsayer David Dean has three—Three!—stories in the top ten. Way to go, David. 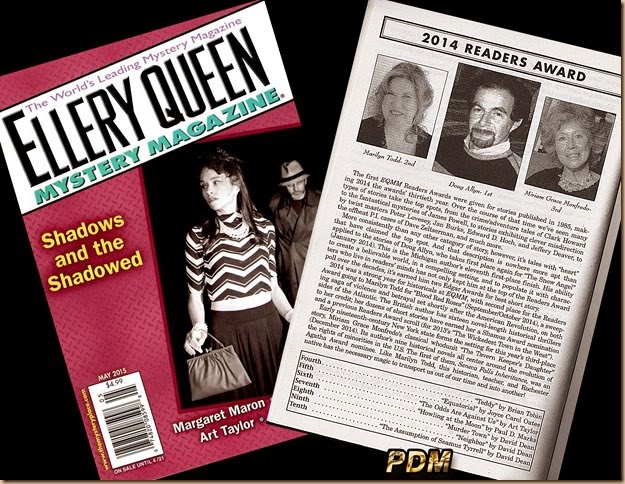