by Michael Bracken
Author bios can be some of the trickiest bits of writing we do. We want a reader to know something of our personality and something of our accomplishments, all within a tightly constrained word count and sometimes following special instructions from an editor.

During the course of our writing careers, our bios take at least three forms—some more stressful to produce than others—and, if we’re lucky, can take a fourth.

The first form is the bio we write early in our career, the one accompanying our first few publications when we have no career of note.

It will be simple, and likely filled with information not writing related:


A. Writer eats broccoli, likes cats, and lives in his mother’s basement. This is his first sale.

The second bio we write after we establish a modest career, and it is likely filled with info about our publications and, maybe, a personal note:


A. Writer is the author of Really Cool Novel (Small Press Publisher, 2016), and more than a dozen short stories published in Magazine A, Magazine B, and others. He still lives in his mother’s basement.

Several years later, after we’ve established ourselves, we have so many accomplishments we could mention that we find ourselves torn. Which do we mention? How much can we say without sounding like an ego-inflated ass? And, so, even though we know it doesn’t include everything we’ve accomplished, our bio looks something like:

This one may be the easiest bio of all but is one few of us ever get to write. This is the point in our career when we have become so famous that our byline is all the bio we need. Think:
If forced to provide more than a byline, we can add just a touch of personal information:


A. Writer. His mother lives in his basement.

Some editors (me, for example) prefer professional bios. That is, they want bios heavy on writing accomplishments and light on personal details. They want to know what awards you’ve received and where your work has been published.

Other editors prefer personal bios. They want to know about your veggie preferences, your cats, your kids, your spouse, your education, your hobbies, and any intimate details of your life you care to reveal.

Still other editors want a combination bio that includes a bit of both.

And, sometimes, an editor wants a specific bit of information included in your bio, regardless of which type (professional or personal) they prefer. For example, I asked contributors to The Eyes of Texas: Private Eyes from the Panhandle to the Piney Woods to include something about their connection to Texas, and through the author bios, readers learn which contributors were born in Texas and still live here, which were born here but moved away, who worked on a cattle ranch, who is descended from the first Secretary of War to the Republic of Texas, and so on.

IT’S NOT THE LENGTH OF YOUR BIO, IT’S WHAT YOU DO WITH IT

Editors often have space limitations, so we must be creative within whatever limitations we’re given. Twenty-five words? Fifty words? One hundred words? It varies from publication to publication.

What you should never do is ignore the editor’s guidelines and send the editor your one-size-fits-all (but doesn’t really) prepackaged bio and ask the editor to revise it to meet her needs or cut it to fit within her publication’s space limitations. 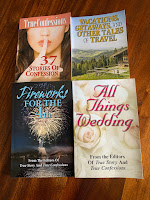 I’m at the Bio Level 3 ego-inflated ass stage of my career—one doesn’t write for forty-plus years without acquiring several accomplishments—and, because I try to write bios that meet each editor’s specific guidelines, I constantly struggle with what information to include.

I’m not complaining about my current bio level, but it certainly would be nice to advance to Bio Level 4.


My past as the King of Confessions rises to the surface. Eight of my confessions have been reprinted in these four anthologies.
Posted by Michael Bracken at 00:00 11 comments


by mystery guest
by Michael Bracken

At the 2016 Bouchercon I received the Edward D. Hoch Memorial Golden Derringer Award for lifetime achievement in short mystery fiction. While I’ve done pretty well writing short crime fiction, it represents less than ten percent of the 1,200-plus short stories I’ve placed since I began my professional writing career in the late 1970s. 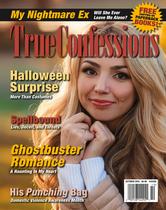 In addition to writing for several anthologies, my fiction has appeared in digest-sized fiction periodicals, supermarket checkout-line tabloids, and slick consumer magazines. I’ve written for readers of all ages, both genders, multiple sexual orientations, and a variety of ethnicities.

Of all the genres of fiction I’ve written, though, I’ve probably had my greatest success in a sub-genre of women’s fiction known as confessions– so much so that several years ago, when I had only published 170 of them, I was dubbed “The King of Confessions” (“Diversify Your Career: Exploring Fiction-Writing Options” by Vivi Anna, Romance Writers Report, July 2010).

Now with more than 400 confessions published, another handful under contract, and several more sitting in the editor’s inbox, and with only two confession magazines still publishing original work, I’m confident that no one will steal my crown any time soon. 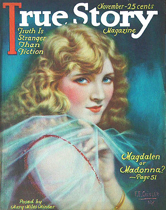 The first confession magazine ever published, and one of the two still published monthly, is True Story. Launched in 1919 by Bernarr Macfadden, True Story became one of many similar magazines produced by a variety of publishers. When I began writing for confession magazines in 1981, only a few years after my professional writing debut in Young World and long past the genre’s heyday, there were still more than a dozen confession magazines, published by at least four different companies, voraciously sucking up content.

Though not every magazine was monthly, the confession magazines were easily publishing more than 1200 short stories each year, and many of them also published poetry, recipes, and various kinds of non-fiction. The magazines in other genres--fantasy, horror, science fiction, mystery, etc.– did not publish as much fiction in a single genre each year as the confession magazines did. For a young fiction writer seeking publication, it made sense to try every possible publication in every possible genre. So I did.

Only Your Hairdresser Knows for Sure

I probably read my first confession magazines while waiting for my mother and grandmother at the hair salon. They were scandalous publications with lurid come-on lines enticing readers to delve into the debauched lives of the female contributors who were confessing their sins. Alas, the stories were never as lurid as the titles. I once sold a story with the working title, “I Slept with My Son, Now My Husband Won’t Sleep with Me,” which sounds like the author is revealing an incestuous relationship, but is actually about a young mother who takes her newborn son into the family bed while the new father sleeps in the other room. 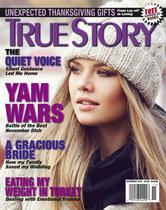 Confession magazines such as Intimate Romances, Intimate Secrets, True Experience, True Love, True Romance, True Secrets, and True Story targeted a white female readership. Magazines such as Black Romance, Bronze Thrills, and Jive targeted a black female readership. They all shared, and the surviving magazines still share, the same conceit: That the stories contained within their pages are “true.”

And readers believe it.

Certain genre conventions make these stories believable. They are all written in first person (most often with a female narrator), in a colloquial style, about matters of interest to blue-collar, middle-class woman. Nothing in a confession can be unrealistic (for example, cancer goes into remission but is never cured).

Once upon a time, confessions followed a similar plotline, known as “sin, suffer, repent.” A woman does something outside the bounds of polite society, she suffers for her actions, and then she repents. In a story from the 1950s, for example, an unmarried young woman becomes pregnant, is sent away to a home where she gives birth to a baby she gives up for adoption, and returns home a changed woman.

Modern confessions rarely follow the old sin-suffer-repent plotline, and are more likely to be problem stories– woman has a problem, explores various solutions to her problem, and then solves her problem (an unmarried pregnant woman must decide whether to terminate the pregnancy, give the baby up for adoption, or raise the baby as a single mother; she chooses one and is either happy or unhappy with her choice) or romances written in first person (girl meets boy, girl loses boy, girl gets boy back).

Other genres can also influence confessions. I’ve written mysteries, thrillers, and horror stories all while adhering to confession genre conventions. 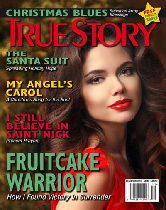 With only two confession magazines still publishing monthly– True Confessions and True Story– and with long-time confession writers such as me filling many of the 240 annual slots, the opportunity for new writers to break in is much diminished from when I started in the 1980s. Even so, it is possible.

But is it worthwhile?

That’s a tough call. The average response time for one of my submissions is 107 days, but I had one story accepted 542 days after submission, so response time can be slow. The magazines pay 3¢ a word for all rights, and payment arrives several months following publication.

Also, you won’t see a byline. After all, these stories are supposed to be “true.”

On the flip side, if you can master the style and can produce work at a steady pace, you might become a regular contributor with regular income. I once calculated that I earn $20+/hour when I write confessions, which is as good as or better than what I earn on an hourly basis writing for better paying publications in other genres.

And the lack of a byline might be advantageous. If you are a literary wunderkind publishing in all the best non-paying literary journals, you might not want your fellow writers to know you pay the bills writing confessions, just as I don’t reveal the titles and bylines of all the pseudonymous sex letters I wrote early in my career.

How to Write Confessions

For detailed information about how to write confessions, read “Writing and Selling Confessions” and “Sin, Suffer, Cash the Checks”. Though both articles are a little outdated– especially submission information– the nuts-and-bolts details remain the same.

For True Confessions and True Story writer’s guidelines, and for other information about the publisher, visit True Renditions, LLC.

Oh, and never tell your grandmother that confessions are fiction. You’ll break her heart.
Posted by mystery guest at 00:00 14 comments