Fine! If He Can't Be Treasury Secretary....

"The pure ermine of the Supreme Court is sullied by the appointment of that political hack."
— The New York American, March 17th, 1836

Two cycles ago in the Sleuthsayers rotation, I wrote at some length about the current national discourse around those pesky Confederate monuments. Two weeks back, I wrote about armed incursions, unauthorized and unsanctioned by the United States government, into Mexico and other then-emerging nations in the Caribbean Basin.

Today's post kicks off with a quick reference back to Monumentgate: namely, the debate on whether or not to remove the bust of former U.S. Supreme Court Chief Justice Roger B. Taney from its current perch in the U.S. Capitol building. And then I'm going to try to tie all three posts together with the theme which clearly connects them.

First: Taney (pronounced "Tawny"), who served as Chief Justice of the U.S. Supreme Court from 1836 until his death at age eighty-seven in 1864. The current debate is whether to remove the bust of him which resides on the old Supreme Court chamber in the U.S. Capitol, and replace it with a bust of the first African-American justice, Thurgood Marshall.

Like a number of the men memorialized in those statues currently causing such a commotion both here and abroad, Taney was a Southerner (born and raised in Maryland). Also like so many of them, he was a member of the planter aristocracy (Taney's family holdings produced mostly tobacco). There can also be little question that Taney believed, as did so many of these other men, that slavery was the bedrock on which "Southern culture" rested, and therefore must be protected.

However, unlike most of these other monumental (see what I did there?) subjects, Taney freed his slaves. Also unlike so many of his fellow Southerners occupying positions of authority in the United States government, Taney did not resign his position when secession came (as one of his fellow Supreme Court justices did). And like fellow slave-holders such as Thomas Jefferson, he seems to have had mixed feelings about slavery, however important he may have felt it was to the Southern way of life.

Now bear in mind that Taney's home state of Maryland never actually seceded from the Union. What's more, Taney was in his eighties by the time hostilities broke out in December of 1860. It's not like he was going to join the army. What's more, his public writings and statements during the Civil War make clear Taney's opinion that the Southern states possessed the inherent right to secede from the Union, and what's more, he also clearly blamed Abraham Lincoln for said secession in the first place.

It makes you wonder how, if given the chance, Chief Justice Taney might have ruled on the myriad court challenges to Lincoln's Emancipation Proclamation and the constitutional amendments which eventually enfranchised all native-born Americans and granted them both citizenship and the right to vote.

Because the existing record of Taney's legal work both as a trial lawyer and as a federal judge paints a pretty clear picture of how Taney felt about the legal status of both slavery and of enslaved peoples of African descent. Let's look at this record.

Taney famously stated in open court in 1819 that slavery was "a blot on our national character." Of course, he was defending an abolitionist against a charge of incitement to riot at the time. So does that statement really count?

After all, Taney, wasn't just a lawyer. He was also a politician. And, as the quote which kicks off this blog post notes, something of a political hack, at that.

Initially a Federalist, Taney changed his party affiliation in 1828, in the middle of a four-year term as State Attorney General for Maryland. This was in coordination with his support for the presidential candidacy of Democrat Andrew Jackson of Tennessee. When Taney left office as Maryland's attorney general in 1831 he quickly found himself filling a succession of positions in Jackson's cabinet.

First he spent six weeks serving as acting Secretary of War, replacing John Eaton, who resigned as part of the infamous "Petticoat Affair." Then Jackson gave Taney plenty to do as Attorney General of the United States.

Jackson had come to power at the head of a coalition of Southern and Western state interests intent on curbing federal overreach and asserting states' rights. Taney supported the view that local governments (in the form of the states) were the bedrock of good government, and that these institutions were more inherently aligned with the direct will of "the people."

Of course, "the people" did not mean all people. In a May, 1832 court appearance in his capacity as U.S. Attorney General Taney argued in support of a South Carolina law stating that free black sailors who came ashore while their ships were in South Carolina ports could be imprisoned. Taney reasoned that:

The African race in the United States even when free, are every where a degraded class, and exercise no political influence. The privileges they are allowed to enjoy, are accorded to them as a matter of kindness and benevolence rather than of right...And where they are nominally admitted by law to the privileges of citizenship, they have no effectual power to defend them, and are permitted to be citizens by the sufferance of the white population and hold whatever rights they enjoy at their mercy. They were never regarded as a constituent portion of the sovereignty of any state... They were not looked upon as citizens by the contracting parties who formed the Constitution.

How do you think the guy who wrote that would have viewed the Thirteenth, Fourteenth and Fifteenth amendments? Remember these words. More on them below.

After a couple of years of representing the Jackson administration's interests in court, Taney found himself in line for an even more powerful position when Jackson fired his Treasury Secretary over a difference of approach in getting rid of the Bank of the United States. Jackson believed the Bank was illegal and wanted to destroy it. Taney supported the notion of independent "State" banks, and was more in line with Jackson on this than his predecessor. So Jackson named Taney as his new Treasury Secretary.

The only problem was that the Anti-Jacksonian ("Whig") party controlled the Senate, and Taney would need to be confirmed by the Senate in this new position as Treasury Secretary. Partly because of his (and Jackson's) stance on the Bank of the United States, and partly because of their loathing for Jackson personally, the Whigs managed to block Taney's confirmation. He bears the dubious distinction of being the first executive branch nominee on the history of the United States to fail to gain Senate confirmation.

Furious, Jackson attempted to appoint Taney to an open position on the U.S. Supreme Court. Again, the Whig-controlled Senate blocked his appointment. But Jackson, not known for being either forgiving or a quitter, wasn't done.

It should be noted that during his eight years in office Andrew Jackson succeeded in completely remaking the Supreme Court, with an unprecedented five appointments. How this came to pass I intend to address in my next blog post. For now, suffice to say that the next time a position on the Court came open, it was that of the Chief Justice, on the occasion of the death of the long-serving John Marshall.

Third time was a charm, mostly, because there had been an election in the interim and Jackson's Democrats now controlled the Senate, so he got Taney on the bench in March of 1836. The quotation that leads off this entry was published in response to Taney's appointment.

Taney quickly developed a reputation for careful, nuanced reasoning during his tenure on the Court. He might have come up as a political hack, but he was also clearly very concerned with being taken seriously as a legal theorist. His rulings in landmark cases throughout his first two decades on the Court won him respect on this front.

They also constitute a clear-cut record of Taney's thinking on the issue of slavery and the role of both it and of African slaves in American society. Time and again Taney and the Jackson-appointed Southern majority on the Supreme Court ruled to support what Southerners termed their "peculiar institution."

This all came to a head with the historical event for which Taney is probably best known: his authorship of the Supreme Court's notorious majority opinion in the federal case of Dred Scott v. Sanford (1857). In this sweeping ruling, dealing with the question of whether a slave taken by his owner into a state or territory where slavery was outlawed was to be considered free, Taney went far beyond the narrow scope of the question before the court, and attempted to settle the broader questions of the legality of slavery and the role of African-descended peoples, be they slave or free, in American society.

As he had argued twenty-five years earlier in the South Carolina port case quoted above, Taney maintained that because their status had not been expressly spelled out by the framers of the Constitution, African Americans had no legal status in the American legal system, and thus, were inherently barred from becoming citizens (never mind that when the Constitution was drawn up in 1788 five of the original thirteen states already afforded free blacks the right to vote). As a result blacks–free or slave–were legally disqualified from bringing suits in federal courts. Under the Constitution, Taney ruled, blacks possessed "no rights which the white man was bound to respect."

You probably know what happened next. Rather than settling the slavery question "once and for all," Taney's decision brought down a firestorm of criticism on his and the Court majority's heads. If anything the Dred Scott  decision helped bring about the violent sectional conflict so many–including Taney's political benefactor Andrew Jackson–had worked so hard to forestall.

In the words of historian Daniel Walker Howe: "Taney's blend of state sovereignty, white racism, sympathy with commerce, and concern for social order were typical of Jacksonian jurisprudence...
Ironically his devotion to state sovereignty and white supremacy in the long run contributed to the dissolution of the Union Andrew Jackson loved." 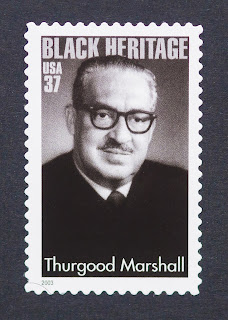 So should that bust of Taney in the U.S. Capitol come down? Should it be replaced with one of fellow Marylander, the Baltimore-born, brilliant lead attorney in the ground-breaking Brown v. the Board of Education civil rights case, and eventual first African-American Supreme Court Justice Thurgood Marshall?

But don't just take my word for it. Ask the Maryland State Assembly and the Baltimore City Council. Both entities removed bronze statues of Taney from their grounds back in 2017.

Tune in next time when I take on the question of how Andrew Jackson managed to get five of his own hand-picked justices placed on the Supreme Court in a mere eight years.

See you in Two Weeks!
Posted by DoolinDalton at 04:05 7 comments