Two blog posts ago I discussed the wonderful Goat Gland Doctor, Doc Brinkley and his crowd way down south.  Today, we're on to radium, oxygenated air, and murder.

First, a contemporary of Doc Brinkley, John Aloysius Bailey (May 25, 1884 – May 17, 1949), a Harvard University dropout who claimed to have a physician's license and promoted using radium as a cure for coughs, flu, and other common ailments. Bailey started up Bailey's Radium Laboratories in East Orange, New Jersey, and while the FTC kept investigating him, he managed to die wealthy (as opposed to Doc Brinkley, who died broke).

While Bailey claimed that adding radium to your drinking water (!) could treat everything from mental illness to diabetes, anemia to constipation, headaches to asthma, his two most famous products were:

Says the curator of a collection of quack cures, "The Radiendocrinator in the above photo was sufficiently radioactive that I had to remove the source before it could be put on display." Remember where it was supposed to be placed on the human body. https://www.orau.org/ptp/collection/quackcures/radend.htm

Mr. Bailey did serve his country during wartime - he was the wartime manager of the electronic division of IBM during WWII.  Who knows how much radiation he carried with him?  In any case, Mr. Bailey died of bladder cancer on May 17, 1949.  When his body was exhumed nearly 20 years later, it was found to be "ravaged by radiation".

And now, murder.  Charles Lewis Blood (September 8, 1835 – September 27, 1908) alias C. H. Lewis, a/k/a C. L. Blood was yet another self-styled physician, who operated in Boston, New York City, Philadelphia, and Chicago.  He sold what was known as "oxygenized air", which he promoted as a cure for catarrh, scrofula, consumption, etc.

Now most quacks are relatively harmless, if you disregard the fact that none of their treatments worked, and could kill you in the trying. But they weren't deliberately  trying to harm people.  Blood was different. He had a rival in the oxygen game in Boston, Dr. Jerome Harris, a real doctor, who was giving people "super-oxygenized air" which was really nitrous oxide.  And probably any patients who tried it thought it was a lot more fun that Blood's version.  Anyway, one day Harris treated a man named Carville, who began frothing at the mouth, rolling on the floor, and having a fit. Harris sent him home, Carville called his own physician who cured him! Miraculously!  And the next day the newspapers were plastered with the horrific story of the poisoning of poor hapless Carvill by the evil Dr. Harris, who was only saved by the amazing treatments of his personal physician...  Dr. C. L. Blood.  Harris ended up having to leave Boston because of all the bad publicity.

NOTE:  In 1880, Blood published "A Century of Life, Health and Happiness", a compendium of medical information for the home, and if I ever find it on a used bookstore shelf, I'm buying it.  As long as it's a dollar.

In May 1884, again in Boston, Blood was arrested for blackmailing Ernest Weber, a local musician. They were, apparently, courting the same woman, Jennett Nickerson.  Cap'n Blood procured from her, allegedly by force, an affidavit to the effect that she had been ruined by Weber (i.e., had sex with him) after he promised marriage, and that Weber had later forced her to have an abortion.  Blood tried to blackmail Weber with the affidavit, but he took it to the police, who arrested Blood.  He was convicted and sentenced to prison.

But Blood got out, and in February, 1890, Blood was implicated in the murder of Hiram Sawtelle, a Boston fruitseller.  Isaac Sawtelle, Hiram's brother, had gotten out of prison "after securing, at great expense, a pardon for his rape convictions."  He moved in with Hiram, Hiram's wife Jeanette, and their mother, a household that was apparently as happy as that of the Bordens.  The main problem was money.  Dad had died, leaving all the money to Mom, but Hiram was managing it, and Isaac was broke (it cost a lot to get a pardon in those days), and he had a friend named Blood, who came up with a plan, involving a third man named Jack...

(Don't worry:  it gets more complicated.)

Isaac kidnapped Hiram's daughter, Marion, and used her to get Hiram up to a secluded camp near Springvale, Maine.  Whatever was supposed to happen, it didn't.  Hiram was shot four times, stripped, decapitated, and the body buried in a shallow grave across the New Hampshire state line. When Hiram's wife noticed her husband was gone, she told the police that she thought Isaac had killed him.  Isaac was eventually captured in Rochester, NH.

Meanwhile, Blood's picture was being circulated by the Boston newspapers, where two hoteliers up in Dover, New Hampshire, recognized it.  One of them reported that Blood had been carrying two bundles, one done up in wrapping paper and apparently containing clothes, and the other wrapped in newspaper and "about the size of a man's head".[9]

Isaac was charged with conspiracy, murder, and was awaiting trial.  On April 13, he confessed that he'd plotted to get the property from Hiram, but denying that he planned or had any part in Hiram's murder.  Instead, it was Jack who led Hiram away, Jack who probably killed him.  Isaac knew nothing about it until the day he was arrested, when he got a letter from Blood that read "Your brother had to be put out of the way. Let each look out for himself."[14]

Here's the fun part:  Despite Isaac's jailhouse confessions and the hoteliers' statements, Blood was never even questioned by police. Even Hiram's widow denied that Blood had any dealings with Hiram.  And at the trial, Isaac himself changed his story, confessing that he'd shot Hiram and that all Blood had done was prepare the legal instruments of transfer for Hiram to sign.  Isaac was convicted and sentenced to death.  Almost immediately he recanted his confession and once again laid full responsibility for the murder on Blood:

"Dr. Blood is the man who is responsible. Some time it will be known, a deathbed repentance, perhaps, and when all is known it will be found that I am innocent of anything to do with the murder. I have accused him; I accuse him now. If he had come forward I would have accused him to his face. But why didn't he appear? He didn't dare to; he didn't dare to face me. Now that I am practically dead he can do what he pleases. He has had a chance to establish and prove an alibi, while I have been in jail, tied hand and foot… Blood was responsible in every way. I do not mean to say that he killed Hiram—that he fired the shots which caused his death—but I do mean that he knew of it and was responsible for it."[17]

Isaac Sawtelle died of natural causes on December 26, 1891, shortly before his scheduled execution.

There was no deathbed repentance on the part of Dr. Blood.  Instead, he moved to Manhattan, where he died on September 27, 1908, in Manhattan.  The short obituary in his hometown Ayer, Massachusetts newspaper, reported that Blood "had lived in New York city twelve years, where he was in a manufacturing business."[12] He was buried in Ayers, in the family plot in Woodlawn Cemetery, but his widow and four surviving sisters did not add his name to the family memorial.  His calling card must suffice...


by Melodie Campbell
I write short.  This stems from my comedy writing roots, where each word must be carefully chosen for impact.  So my publishers don’t delete a lot of scenes from my books.  In fact, they usually tell me where to add more words.
With one exception.

There seems to be a convention that crime books shouldn’t contain sex.  Oh, they can refer to sex. Sex can be a powerful motivator for all those violent scenes we are allowed to describe in painstaking detail. (Irony alert here.)

Okay, so I show a bit.  But just a little bit.  I don’t write X-rated, honest.  In fact, I write with the sort of silliness that might be associated with old Benny Hill skits.  So we’re not talking Fifty Shades of Naughty here. (otherwise known as Fifty Shades of Boredom.  But I digress…)

It’s a crime <sic>.  Heck, it’s enough to make a poor gal swap genres. Have you read any steamy romance books lately?  Those novels can be practically pornographic.

When did romance books become more adult than crime books?

I explained to one of my publishers why a certain sexy blackmail scene was essential to the story. It provided motivation that was completely necessary.  So here was their admittedly canny solution:
Leave the dialogue in, but take out the other senses – the sounds, the visuals, the - let’s leave it there.

Yes, it still works.  You get what’s going on by what is being said.

Does it lose impact?  Well, yes.  I work hard to include all the senses in my writing.

But does it work for the plot?  Yes, it does.  It might even be funnier without the senses.

You be the judge.

From THE GODDAUGHTER’S REVENGE, winner of the 2014 Derringer and Arthur Ellis awards:

“Now Carmine, move up front here and pay close attention to this video,” I said. “You might know the people.”

Everyone came closer. You could almost hear each individual breath. Except then I turned up the volume and you could only hear the heavy breathing and moans coming from the laptop.

All eyes were glued to the screen.

“Holy shit!” yelled Carmine. “How did you get that?”

“Carm, that ain’t your wife. Tracy’s not a blond.” Bertoni was confused.

“How the heck is she doing that?” Pete stared at the video with far too much interest.

Has your publisher ever dialed back a particularly sexy scene? Give us the dirt <sic> in the comments below. 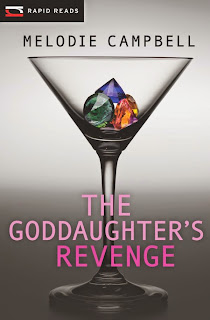 THE GODDAUGHTER'S REVENGE (from Orca Books)
at Amazon
at Chapters
Posted by Melodie Campbell at 00:00 18 comments