I was on a panel about writing at our local library and the moderator asked each of us "What book or story would you love to have written, and have put your name to?"  My answer was - and is - The Good Soldier, by Ford Madox Ford. 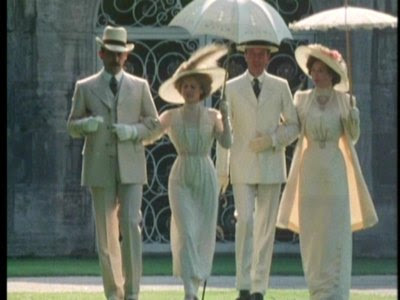 You Say Sensation, I Say Mystery...

It was a dark and stormy night, and I've got to have something to read.  I'm sorry, but tonight, as the wind howls and the hail spatters against the window, I don't want anything new.  I don't want anything slick.  I don't want anything modern.  I want something familiar and satisfying.  Who do I fall back on? The Victorians:  Never underestimate the punch of a Victorian writer.  They pretty much began the mystery genre, under the much-maligned term "Sensation Novel", and don't get enough credit. If you have never read any of them, allow me to recommend three of the most famous and accessible:

Wilkie Collins' The Woman in White.  Here two young women's identities are stripped from them as one is declared dead, one is dead, and one is sent to a madhouse for life.  What happened?  Who died?  Who lived?  How can the truth be proven?  Besides an endlessly twisting and turning plot, there are amazing characters:  a magnificent heroine in Marion Halcombe, the ultimate Victorian cold-hearted bitch in Mrs. Catherick, and the worst guardian known to man, Frederick Fairlie, who really should have been shot at birth.  And then there's Count Fosco, one of my favorite villains in all of history, with a face like Napoleon's and the heft of Nero Wolfe.  Watch him as he plays with his little pet white mice and, at the same time, his irascible "friend" Sir Percival Glyde.  Meet his completely subservient wife, who spends her days rolling his cigarettes, watching his face, and doing his bidding.  He loves sugar water and pastry and plotting, and he never, ever loses his temper or raises his voice.  His only weakness?  A passionate admiration for Marion.  But can that actually stop him?  Don't count on it.
(NOTE:  Collins' wrote many other novels, including The Moonstone, which I don't care for, actually, and Armadale, which is even MORE full of plot twists and turns than The Woman in White.  And Lydia Gwilt should scare the crap out of anyone...)

In Mrs. Henry Wood's East Lynne, the ostensible main plot - and a true Victorian corker it is! - revolves around Isabel Vane, an Earl's daughter who, unbelievably, is reduced to poverty and marries an attorney (SO much beneath her in birth), Archibald Carlisle.  Mr. Carlisle is such a miracle of common sense, rectitude, honor, and beauty, that I have to admit after a while I get tired of hearing how wonderful he is.  It almost makes you cheer when she is eventually unfaithful to him with a former suitor, who gets her to run off with him, impregnates her, and abandons her (the "Lady!  Wife!  Mother!" scene is worth the read in and of itself).  Lost - in every sense of the word - and alone, Lady Isabel is believed killed in a railroad accident.  However, she is only disfigured beyond recognition (isn't that always the way?), and comes back to be the governess in her old home, to her own children, and to the children of her husband and his new wife, Barbara Hare. 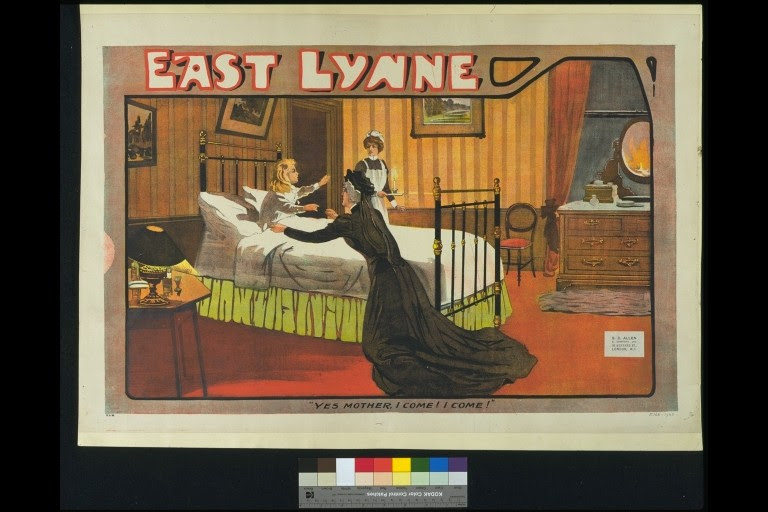 That in itself would keep almost any soap opera running for YEARS.  But what really fuels this sensation novel is the second plot, about the murder of a local gamekeeper, whose daughter, Aphrodite Hallijohn, was "involved" with multiple suitors, among them the clerk of courts (I can believe that one), a mysterious Captain, and Richard , the brother of the second Mrs. Carlisle.  Richard and Barbara are the children of the local Judge, and Judge Hare does his best throughout the novel to find, convict and hang his own son.  Barbara's whole goal in life (other than being the perfect wife to Mr. Carlisle) is to clear Richard's name.  Each and every character is involved in the solution to this murder, and the shifting identities of various people - at least three people live in disguise for major parts of the novel - are obstacles, keys, and clues to what really happened in that hut.
(NOTE:  Mrs. Henry Wood wrote over thirty other novels, and among the best of the rest (imho) is The Channings.)

Mrs. Elizabeth Braddon's Lady Audley's Secret curled many a person's hair back in the day, especially once it was revealed that what they thought was the secret - a secret that should be solved by anyone of moderate intelligence early on - is not The Secret at all.  Let's just say that Lady Audley is a work of art, and perhaps the source material for all suicide blondes.  Once again, a spicy Victorian stew of bigamy, mysterious deaths, hidden identities, even more mysterious (and convenient) arson, betrayal, adultery, heartache, and suspense, all served up at (for a Victorian novel) a fairly rapid clip.
(NOTE:  Mrs. Braddon was another prolific author; second best novel is probably Aurora Floyd.)


Sensation Novels are often given a bad rap, but they were very well written, intricately plotted, and take you into the Victorian world in a way that few other books do.  Let's also not forget that, in their day, the Sherlock Holmes books would have been considered Sensation Novels - I mean, come on:  Polygamy!  Murder!  Hidden identities!  Revenge!  Giant devil hounds!  Granted, Sherlock Holmes transcended the genre - every genre - but he started in sensation.  And I'd love to debate someone about why Dickens is literature and Sensation Novels are not.

By the way, Sensation Novels are also proof, once again, that reality must be watered down to be acceptable fiction.  The Victorian authors were an interesting bunch.  Wilkie Collins was an opium addict who had at least two concurrent families, and married the mother of neither of them.  Mrs. Henry Wood was married to an unemployed alcoholic, and her writing supported the family.  And Mrs. Braddon was involved for years in an adulterous relationship with her editor.  And when Jane Eyre came out, it was widely assumed that Mr. Rochester was based on William Makepeace Thackeray, whose wife was in an insane asylum, and who was believed to be having a long-running affair with his governess...

All of these books, and many more, are available either new, used, or on Kindle. Please, check them out.  Those dark and stormy nights are coming back...  Next time, more Victorian murder mysteries!