Everyone knows the story of Vincent van Gogh. In desolation and desperation, he sliced off his ear and gave it to a love interest, a local prostitute.

Much of that tale is problematic, even outright false. I have a simpler theory: 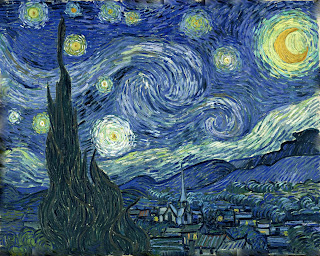 Women were the least of Vincent’s problems. His trip to the south of France hadn’t worked out, his paintings weren’t selling, and he was dependent upon his younger brother Theo for a small monthly stipend. Naturally, when a person pays money to another, they feel entitled to offer advice.


“Vinnie, Vinnie. What am I going to do with you? Sunflowers? Who cares about sunflowers. In my dreams, I hear a voice chanting, ’Take a leaf from O’Keeffe.’ Don’t know what the dream means, but there you go.”

“And that weird thing, Drunken Fireworks on Bastille Day, title it Starry Night. Listen, I’m an art dealer. I know these things. You with me, bro?”

“Look, a healthy guy ought to paint nekked women. Look at Manet, look at Georgione, Gérôme, and hey, your buddy Gauguin. Naked people, now that sells; flowers not so much. Try to be more, well, like Toulouse.”

“Too loose for what?”

“Vinnie, Vinnie. Check out other artists, man, keep your ear to the ground. You so got that Dutch yardstick-up-your-klootzak thing. That peasant who models for you, what’s his name?”

“That’s enough to depress anyone. Gotta go, bro. That argument with Paul, get over it. Gauguin’s a good guy. Tell him to send me some work. See ya, Vin.”

Van Gogh was one down-and-out dude. No luck selling his works, no luck with women, no job, no money, no friends– Van Gogh found himself beset with problems, especially depression.

On the 23rd of December 1888, he underwent a nasty row with his roommate, Paul Gauguin. Hours before Christmas, Van Gogh found himself abandoned, alone except for a bottle, actually a case of bottles.

He drank. He drank a lot. He followed Gauguin and waggled a straight razor at him. Gauguin sensibly fled to a hotel.

Vincent, truly alone, a man and his bottle… and a device commonly called a cutthroat razor.

The very drunk, very depressed artist decided to take his own life. He unfolded the blade. Intending to deliver a huge, decisive stroke, he raised the razor high above his shoulder, above his head. He hesitated, then whipped the blade down in a dramatic slash toward his quivering throat and…

Gashed his ear, slicing it nearly off. Momentum lost, the blade glanced off his neck.

The inebriated artist botched his suicide.

The shock of blood and pain brought Van Gogh partially back to his senses. Woozy, he wrapped the ear and staggered to the brothel. There he unsuccessfully begged the teenage seamstress to sew it back on for him, a job too much for the girl.

Vincent van Gogh hadn’t deliberately cut off his ear. He’d intended to cut his throat and bungled his suicide.

So says my hypothesis. What’s your take?
Posted by Leigh Lundin at 00:00 8 comments