by mystery guest
Mention Sidney Paget or John Tenniel and aficionados of Sherlock Holmes and Lewis Carroll’s Alice stories recognise the original artists who illustrated the characters we know and love today. But bring up Robert Seymour and puzzled looks abound. A new author, Stephen Jarvis, intends to change that.

I’m not sure how I stumbled across Stephen Jarvis, although Velma claims credit. Once I realized he was writing about Charles Dickens and Pickwick, I had to know more. Indeed, we’ve written about Pickwick’s manservant, Sam Weller, and when I realised a mystery was involved, I asked Mr Jarvis to write an article for us. After you read today’s column, take a moment to read about Jarvis’ and his wife’s 2005 detective work discovering Robert Seymour’s tombstone.

Stephen Jarvis was born in Essex. After dropping out of graduate studies at Oxford University, he quickly tired of his office job and began doing unusual things every weekend and writing about them for The Daily Telegraph. These activities included learning the flying trapeze, walking on red-hot coals, getting hypnotized to revisit past lives, and entering the British Snuff-Taking Championship. Death and Mr. Pickwick is his first novel. He lives in Berkshire, England.

Charles Dickens left behind two mysteries when he died: the well-known mystery of the ending to his unfinished last novel Edwin Drood, and the much lesser-known mystery of his illustrator Robert Seymour, who shot himself shortly after starting work on Dickens’s first novel, The Pickwick Papers. Why did Seymour kill himself? What happened when he and Dickens met? And what role did Seymour play in the creation of The Pickwick Papers? It is astonishing, when you consider all the thousands of academic papers, articles and books that have been written about Charles Dickens’s life and works – often on the most obscure subjects - that so little has been written about Seymour. For me, Seymour is THE key person in Dickens’s career; and in my forthcoming novel, Death and Mr Pickwick, which tells the story of the creation and subsequent history of The Pickwick Papers, Seymour is the main character.

But who was Robert Seymour?

Seymour was the most prolific cartoonist of his era, and he drew literally thousands of pictures. He was best-known for his political cartoons – even though Dickensians usually refer to Seymour as a “sporting artist”. Actually, his sporting pictures represented just a small fraction of his overall output. In his own time, Seymour was famous: he was called “the Shakespeare of caricature” and “the ubiquitous Seymour”. And yet today, Seymour is so little-known that I have been in shops that sell antique prints and even the proprietor has not heard of the artist. You would almost think that people deliberately want to hush up Seymour’s life – and indeed, there are some indications that that is so.

In the 1920s, an American called Dr Samuel Lambert came over to England, to investigate Seymour’s role in The Pickwick Papers. My opening statement about the two mysteries that Dickens left is a homage to Lambert, for that is what he said himself. Lambert approached the Dickens Fellowship in the course of his research – and soon discovered that the Fellowship was most unwilling to talk to him. What’s more, an attack on Lambert was published shortly afterwards, in the Fellowship’s journal The Dickensian, stating that the idea that Seymour had any significant role in the creation of Pickwick was “exploded long ago” and was not even worthy of serious consideration.

When I read that piece in The Dickensian, it sounded to me that the Fellowship was trying to steer people away from Seymourian research. A possible explanation is that Seymour may have been gay. In the 1920s, there were taboos about even mentioning homosexuality – and the idea of a gay man being associated with Dickens, and with the largely male cast of The Pickwick Papers, would in all likelihood have horrified Dickensians of that time.

But there is also the question of the role that Seymour played in the creation of The Pickwick Papers. At first, when I started doing research for the novel, I believed the statements that Dickens, his publisher Edward Chapman (of the firm Chapman and Hall, the publishers of Pickwick) and his biographer John Forster, made about the origins of Pickwick. In essence, they stated that Seymour had an idea for the adventures of a club of cockney sportsmen, called the Nimrod Club - but that Dickens overturned this idea, and that only vestiges of Seymour’s original plan remained, in the form of the sporting tastes of the character Mr Winkle. Moreover, Edward Chapman claimed that he was responsible for the visual image of the novel’s main character, Mr Pickwick, and that Seymour had followed instructions to base the image on the appearance of a man that Chapman knew. In other words, the role of Seymour was minimal. However, as I continued my research, I came to realise that this supposed origin simply could not be correct.

Contradictions started to emerge, and there was a complete lack of evidence for the statements made by Dickens and his associates. Also, contemporaries gave a rather different account of Pickwick’s beginnings – for instance, an engraver called Ebenezer Landells, who was working for Chapman and Hall at the very time Pickwick was published, said that Seymour created Sam Weller. The artist Robert Buss – who temporarily replaced Seymour as the Pickwick illustrator after the suicide – said that Seymour had created Mr Pickwick and the members of the Pickwick Club. Also, there were reports in the press that Dickens was “writing up” to Seymour’s pictures – the opposite of what Dickens later claimed. Nor were these simply wild allegations. If one looks at Seymour’s output, one can indeed find prototypes of the likes of Mr Pickwick and Sam Weller. And when I looked into the background of John Forster, I discovered firstly that he had written a number of historical works, and secondly that he had no reputation as a historian – he was quite prepared to fabricate material, and be fiercely partisan.

But what of the suicide? Most Dickensians simply deny that Dickens had anything whatsoever to do with Seymour’s death. They point to the artist’s suicide note, in which Seymour said he blamed no- one and that the suicide was down to his own “weakness and infirmity”. One Dickensian even said to me that Seymour “exonerated” Dickens in that note. Another distinguished Dickensian told me that “we must look elsewhere” for the causes of the suicide, not towards Dickens. What the Dickensians don’t point out, though, is that Seymour returned from a meeting with Dickens in a state of extreme emotional distress – and he immediately burnt his papers and correspondence about Pickwick.

Another fact not usually told is the nature of the law surrounding suicide at this time. The law distinguished between suicide and felo de se, or self-murder: if an inquest decided that a suicide was a rational act, that is felo de se, then it would have the most terrible consequences for the victim and his family. In the first place, the victim would be denied a Christian burial, but also the victim’s family would instantly be reduced to destitution – because the Crown would take away all the victim’s property, leaving the wife and family to inherit nothing. So of course in a suicide note, Seymour wouldn’t blame Dickens - he would be unlikely to blame anyone at all – because if he had done so, he would be handing the inquest evidence that his death was felo de se, a rational escape from the problems of life. Seymour’s real feelings were communicated by the way he left his etching plates for his last drawings for Pickwick: He turned the plates to the wall, as though they disgusted him. And this was for a project which Seymour’s wife said was the artist’s “pet idea”. An idea which – until he came into contact with Dickens – was of immense personal importance to Seymour.

You will notice also that I said that Seymour returned from a meeting with Dickens. Not the meeting. For Dickens claimed that he met Seymour only once in his life. That, too, I believe to be a lie.

I am not trying to denigrate Dickens’s abilities as a writer. But I do say that he did not tell the truth about Seymour and he tried to pass off Seymour’s ideas as his own.

The Pickwick Papers catapulted Dickens to global fame and it went on to become the greatest literary phenomenon in history: it was the most famous novel in the world for almost a hundred years, with a circulation that was exceeded probably only by the Bible. And The Pickwick Papers would not have happened without Robert Seymour. 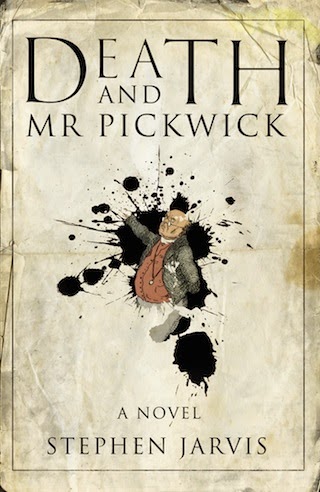 It is surely time to acknowledge Seymour’s great significance in the life and career of Charles Dickens. Death and Mr Pickwick sets the record straight.

Further information can be found at DeathAndMrPickwick.com where there are also links to the publishers’ sites for pre-ordering.

The publisher, Farrar Straus & Giroux, will provide two ARCs as prizes to SleuthSayers readers. ARCs are Advance Reader Copies, bound uncorrected proofs, available now in advance of the publishing release in May (UK) and June (US). Among readers, ARCs are considered collectors’ items. Not only are they rare and unusual and suggest you know someone who knows someone, they often give insight into the writing and editing process. For our readers, these come with a clever bookmark and a special address from the head of FSG.

Author Stephen Jarvis will magically select at random two non-SleuthSayers (I hear the sighs) from amongst the commenters. Here is where we need your help: Our blogging software doesn’t provide an invisible way for you to give us your email address without the risk of receiving spam offers for fake Rolexes, hangnail implants, and special financial deals from Nigeria. You must do the following so we can contact you from your comment:
Good luck!
Posted by mystery guest at 00:00 12 comments

My editor, writer, friend Sharon has a quick eye for writing goofs and spotted the above from BookPerk.com. Pity the world renounced one of her favorite writers, who's actually a five-time recipient of RWA’s Favorite Book of the Year Award.

I've been receiving silliness and word play in my eMail, which I'll share with readers. Along with many writers, I enjoy word play, a devil's playground for an idle mind.

Once earlier, I discussed spoonerisms, but today I'll mention wellerisms, derived from Charles Dickens's first novel, The Pickwick Papers (1836-1837). Samuel Pickwick's man's man Weller was sort of a cockney Sancho Panza to his employer's Don Quixote. Sam Weller and his father Tony became known for pithy remarks and proverbs. By 1839, the popular valet had become a sensation resulting in Weller merchandise, puzzles, joke books, and even bootleg copies of his stories.

Wellerisms center around a quotation, a cliché, or sometimes a proverb, misapplied with humorous effect. Examples of wellerisms include:


The once popular adverbial Tom Swifties are a variant of wellerisms. For example:

Ingrid Bergman said, "A kiss is a lovely trick, designed by nature, to stop speech when words become superfluous." Before y'all tell me to kiss off, I'll stop speaking.
Posted by Leigh Lundin at 00:01 17 comments