Racial Profiling, or Why Joe Arpaio Would Have Locked Me Up


by Eve Fisher
I am not, in any way, a fan of Joe Arpaio's pardon.  The former Sheriff of Maricopa County, Arizona (which includes Phoenix) was a racist power-mad S.o.B.  (I know, I know, I should tell you how I really feel.)

Arpaio apparently believed that anyone Hispanic - or looked Hispanic - had to be illegal (NOTE: they're not.)  Arpaio and his deputies specifically targeted people with brown skin, and would simply pull over people who looked Hispanic.  "About a fifth of traffic stops, most of which involved Latino drivers, violated Fourth Amendment prohibitions against unreasonable seizures. "

It is important to remember that Arpaio ran a jail, not a prison. Nonetheless, Arpaio referred to his jail as a concentration camp, and called all detainees (60% of whom had only been arrested, and had not yet arraigned, tried, or convicted) criminals.

NOTE:  Coffin v. United States 1895 established "presumption of innocence" as the bedrock of our criminal justice system.  But not, apparently, in Maricopa County.

Sheriff Arpaio dressed his detainees in black-and-white striped uniforms and pink underwear because it gave him a good laugh.  He fed the prisoners rotten food - green bologna was a favorite - because they didn't deserve any better. He housed detainees outdoors, under Army-surplus tents, without any cooling measures and inadequate water - the temperatures in the tents could easily reach 140 degrees. “I put them up next to the dump, the dog pound, the waste-disposal plant.” Sheriff’s department officers punished Latino inmates who had difficulty understanding orders in English by locking down their pods, putting them in solitary confinement, and refusing to replace their soiled sheets and clothes. The investigation found that sheriff’s department officers addressed Latino inmates as “wetbacks,” “Mexican bitches,” “f***ing Mexicans,” and “stupid Mexicans.”   (The New Yorker)

But wait, there's more!  Arpaio was a real piece of work. He was (and is) one of the most prominent and persistent "birthers" around, to the point where he used Maricopa County funds to send a 5 man deputy squad to Hawaii to investigate then-President Obama's birth certificate.  He set up a fake assassination attempt to boost his reelection.  He tried to get a grand jury to indict a number of Maricopa County judges, supervisors, and employees.  (The grand jury rejected all the claims.)  His office improperly cleared - i.e., claimed to have solved - up to 75% of cases without investigations or arrests, and simply ignored hundreds of rape cases.  He claimed that he lacked enough detectives to do the job - and when he was given $600,000 for more detectives, none were hired and the money vanished.  Along with almost $100 million of Maricopa funds.  (See https://en.wikipedia.org/wiki/Joe_Arpaio, and The Atlantic)

But wait, there's more!  Back in 1995, a wheelchair-bound paraplegic named Richard Post needed help to urinate; well, that was asking too much, so the jailers strapped him into a restraint chair, tightened the straps as tight as they would go, and left him there for six hours. And broke his neck. In case you're wondering, he'd been arrested for possession of a joint.  And no, he hadn't even been tried yet.  Presumption of innocence...  And no, this wasn't the only mauling, maiming, and even death that occurred under Arpaio's rule, in Arpaio's jail, where, remember, over 60% of his "criminals" were simply awaiting trial, often stuck because they couldn't afford cash bail. (Phoenix New Times)

What finally began the end of Arpaio's career was when a Mexican man holding a "valid tourist's visa" was stopped in Maricopa County, arrested, and detained for 9 hours in 2007. The man sued Arpaio and the Maricopa County Sheriff's Office, alleging racial profiling. Four years later, in December, 2011, a federal judge in Phoenix ordered Arpaio to stop detaining anyone not suspected of a state or federal crime, reminding him that simply being in the U.S. illegally is not a crime, only a civil violation. Arpaio's response was to let everyone know that after "they went after me, we arrested 500 more just for spite." He was voted out of office in November of 2016.  He was finally convicted July 31, 2017, of criminal contempt of court. He was pardoned by President Trump August 25, 2017, before he was even officially sentenced.


After all, I'm not black.  I'm not Hispanic.  I'm not Jewish.  I'm not Native American.  However, I've been mistaken for all of these.  I'm 100% Greek, born there, orphaned there, adopted from there.  (All right, my genome, according to National Geographic, is 50% Greek, 25% Tuscan Italian, and 25% Northern Asian Indian.)

But I know something that blonds don't know.  I learned, very young, that WASP Americans - even those who aren't racist / bigots - are very ignorant of the possibilities of ethnic differences in a group of people who all have brown eyes, black hair, and a slightly darker shade of skin.  To many WASPS, we all look alike. 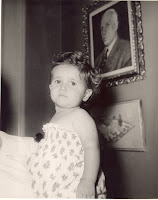 I was shipped to this country when I was 2 1/2 years old - here's a picture of me from the orphanage. That curly hair, those big dark eyes, led some people in our Arlington, VA world to assume that my parents had (for reasons passing understanding) adopted a child who might have "a touch of the tar brush" as it was so politely put back in the 1950's.  There were also whispers about me in my grandmother's small town in Kentucky. Nothing overt.  Just whispers, enough so that I was aware, early on, that not everyone was as pleased to have me around as my parents and grandparents.

Since then, I've had the privilege of explaining who I am, i.e., where I'm from, to an endless stream of people.  When I travel internationally, I'm the one taken aside for questioning.  I have a passport that says I was born in Athens, Greece, for one thing, and that makes people wonder.  It's only gotten worse since 9/11, and I have had long chats with uniformed personnel in many an airport.  The one exception is Athens, Greece, where the guy looked at my passport and waved me through without even a baggage check.

But even when I don't have to have a passport, such as crossing the border into Canada - and they are always very polite - I'm the one who has to get out of the car and talk directly to the border guard so that s/he can make sure I'm not...  someone else...  something else...  That I really am "American". 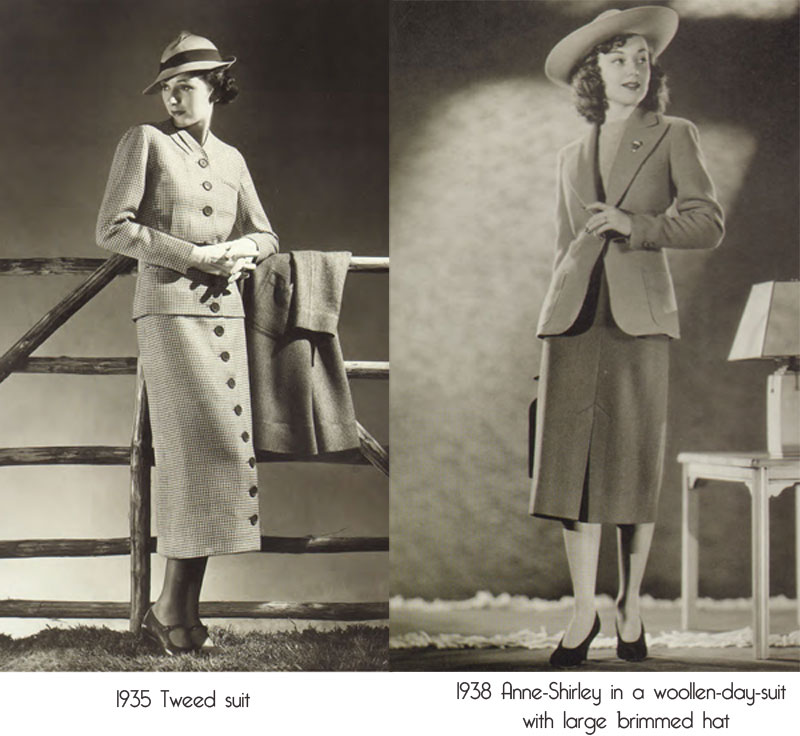 In 1960 we moved from Arlington, VA to southern California.  In the '60s, when the California image was blonde, tan, and thin.  I had the tan.

NOTE:  It's all right - I figured if you can't join 'em, beat 'em, and (in the world of mini-skirts and gogo boots) came to school wearing my grandmother's 1930's suits (see illustrations on the right) and an armload of books.  If you're going to stand out, stand out with style.

A little profiling, here and there.  A  a lot of, "Greece?" said by someone with an extremely puzzled face.  And some other things, like the time a KKK type followed me through the stacks in the public library saying "oink, oink", "Jew pig", "Jew bitch", etc.

And then we came to South Dakota, where I have been taken for Native American.  In a small town West River, my husband and I stopped late one summer night to get a motel room.  Back then, I had long hair, down to my waist, and, since it was summer, a pretty good tan.  I was told they had no vacancies.  I went back to the car and we sat (windows open) to figure out where the next closest town was, and another car pulled up.  A nice blond man got out, went in - I could hear the entire conversation - asked if they had a room, and was told "Yes, sir.  Sign right here." I told some friends about it, and they said, "Oh, yeah.  They're pretty racist up there."

Now all this happened, but not daily.  (Well, not since my school days - no, you could not pay me enough money to be a child again.)  Just often enough to give me a hint of what it must be like to be truly a minority in this country.  But I'm still officially white, part of the white majority, and I do have privileges. There are all sorts of things I can do without getting arrested, or even stopped by the police: 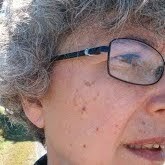 But, for me, any and all of the above would have been risky behavior in Maricopa County under Joe Arpaio.  Maybe not for you, but for me.  Because of how I look.

Pardon Joe Arpaio?  I wouldn't have, but what's worse is that he was convicted and then pardoned for a misdemeanor.

Did I mention his "special forces" that led a botched raid in which they firebombed a home to ashes and burned a puppy alive?  (See here.)  And found nothing?

Did I mention that Joe Arpaio was/is one of the founders of the The Constitutional Sheriffs and Peace Officers Association (CSPOA, for short) that believes that sheriffs are "the highest executive authority in a county and therefore constitutionally empowered to be able to keep federal agents out of the county"? And, as such, are not responsible to any federal law, agent, or judge? (See CSPOA and/or Southern Poverty Law Center on the movement.)

After all of that, a misdemeanor?  Unpardoned, the most he would have served would have been six months, maximum, and - sadly, tragically - it wouldn't have been in the Arpaio Maricopa County Jail.

Pardon him?  I sure as hell wouldn't have.  But then, I have skin in the game.
PS - Next week, back to quacks, radium and murder.